College baseball: Freshman Butts has been key for surging Indians 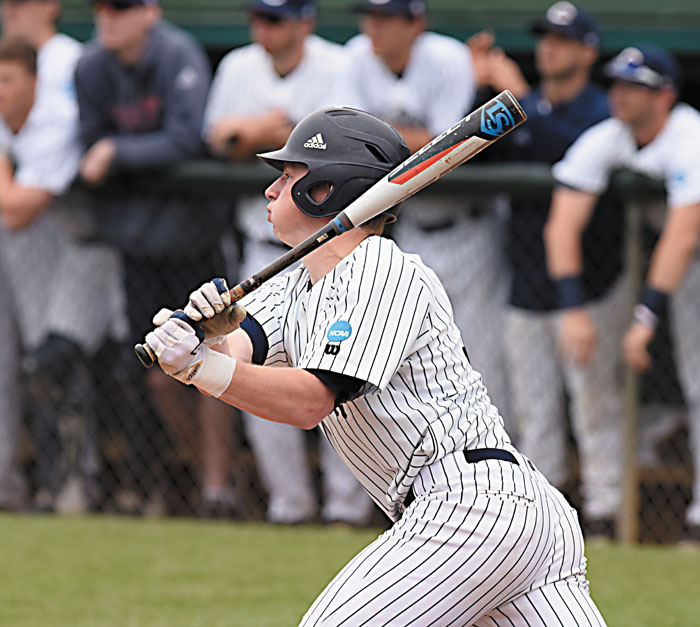 Wayne Hinshaw file photo/for the Salisbury Post ... Catawba freshman second baseman Joe Butts has been a pleasant surprise this season and a key reason the Indians have rebounded from a tough start.

SALISBURY — Freshman second baseman Joe Butts launched a ninth-inning homer last Friday at Anderson, a two-run shot off closer Matthew Stanley that was the difference between winning and losing that series.

Butts also belted a three-run homer at Mars Hill in a weather-delayed South Atlantic Conference series just four days before he went deep at Anderson, so this is not a run-of-the-mill freshman.

“No, he’s not,” Catawba coach Jim Gantt said with a smile. “We knew Butts could play right away for us, even though we weren’t sure exactly where he would play. He just has the right mentality. He can handle stuff. When things go wrong, and things will go wrong, we know he can deal with it.”

At times, things have gone wrong for Butts.  There’s an adjustment period for every freshman, no matter how talented. Catawba’s demanding fall workouts and intrasquad scrimmages were eye-opening. Butts struggled to hit against his new teammates.

“I think I had five hits for the whole fall season, batted about .100,” Butts said. “But the coaching staff didn’t give up on me and my teammates didn’t give up. Our older guys like (reigning SAC Player of the Year) Luke Setzer kept telling me that I could do it, that the team really needed for me to do it. I tried to stay positive.”

There wasn’t much adversity for Butts in high school. He was the prototypical All-American boy at North Davidson.  The son of a longtime high school coach, he was a tremendous quarterback, shattering school records as a junior in his first year as the starter, then breaking his own records as a senior. In those two seasons, he accounted for 77 touchdowns and threw for nearly 8,000 yards while operating a devastating spread offense. He wasn’t just piling up stats, he was directing the Black Knights to 20 wins, three in the 4A state playoffs.

Butts was good in baseball too, obviously, starting at second base most of his career before playing shortstop as a senior. He was the second baseman when North Davidson’s loaded 2016 team won the 4A  championship. It was Butts who started the winning rally in the seventh inning against Green Hope High at Five County Stadium. His single led to a celebration.

Butts gave up basketball after a middle school knee injury, but when the Black Knights needed him as a senior, he joined the squad.

“It’s not like I was lethal or anything,” Butts said with a laugh. “But I hustled.”

Football was always the dream for Butts. He ate, drank and slept football from the time he was able to throw a spiral. He had some talent for football, but mostly he had the head for it.  As a youngster, he understood the game like a coach and was athletic enough to execute. When defenses gave him something, he took it. He made the 300-yard, 4-TD game happen every Friday in the rugged Central Piedmont Conference.

“I always knew I’d play college football,” Butts said. “But then, I didn’t get any offers. Not one.”

College football coaches are looking for 6-foot-4 quarterbacks. Butts is about 6 feet tall. His stats, no matter how amazing, weren’t going to change that.

So Butts had to re-evaluate his future. Catawba actually had looked at Butts for football, and former Catawba offensive coordinator Kevin Brown really liked him, but Catawba was set at quarterback.

But baseball was a different story. Gantt watched Butts play against Rowan County for the Lexington-Davidson American Legion team and knew he needed him. Gantt viewed Butts as a dynamic player and a winner with leadership intangibles even greater than his athletic skills.

“We saw him profiling best as a center fielder,” Gantt said. “We saw him as a guy who could be the quarterback of our outfield.”

With no football offers on the table for Butts, Catawba baseball, with all its winning tradition, was an easy sell for Gantt, and it didn’t hurt that Butts was a third-generation Catawba legacy. Joe’s father, Bill, had come out of West Davidson High to play both football and baseball at Catawba and was the Kirkland Award winner as the Indians’ outstanding male athlete in 1980.

“My dad brought me to a lot of Catawba baseball games at Newman Park when I was growing up,” Joe said. “I always thought it was just a really sweet place to play baseball, really old-fashioned.”

Catawba’s plans for Butts’ freshman year were altered drastically when Jeremy Simpson, the SAC’s Gold Glove winner at shortstop two straight years, was lost prior to the season with shoulder surgery.

Simpson’s injury moved Butts from the center field debate to the middle infield competition. Catawba opened the season in Florida with Butts at second base and with Jacob Nester, a utility man a year ago, at shortstop.

After an 0-3 start, Gantt decided to move Butts, who got his first two college hits on opening night, to shortstop. He shifted Nester to second.

Growing pains continued as Catawba began the season in discouraging fashion — 0-7.  Catawba wasn’t as far along as it usually is because ugly weather had made it difficult to practice outside, and the schedule was brutal. Setzer said it’s the toughest schedule Catawba has tackled in his four seasons.

“That start wasn’t that big of a  shock because of the teams we were playing,” Butts said. “But it was still disappointing.”

After Butts had a rough defensive day on Feb. 17, Gantt gave him a day off on the 18th. His only action came as a pinch-runner.

“Butts was struggling some on his throws from shortstop, so we just had him regroup mentally,” Gantt said. “I think he backed off and told himself, ‘Hey, I can do this.'”

Catawba was 3-9 when it hit the road to play always strong Mount Olive on Feb. 20. Butts was back in the lineup, returning to second base, and Nester moved back to shortstop. Catawba won at Mount Olive, and that’s the day the season turned around. Catawba has stuck with that infield alignment since and has won 16 of 24 to climb to 19-17, going into Wednesday’s game at North Greenville.  The Indians are 13-4 in the SAC and tied for first place with Wingate.

After that rocky start, Catawba has improved defensively and offensively. Butts still has a team-high 14 errors, but they have come far less frequently. He’s found a home — maybe a permanent home — at second base.

“Nester has taken the shortstop job and run with it, and I’m happy about that because it’s been big for the team,” Butts said. “I’m most comfortable at second base. There’s a lot less pressure than at shortstop where everything happens faster and the throws are a lot tougher.”

There have never been any questions about Butts’ offense. He’s settled into the No. 5 or No. 6 spot in a potent lineup. His .356 batting average is third on the team. He draws walks, drives in runs and has some power. He has eight doubles and four homers.

“He gets really big hits and he can run the bases,” Gantt said.

Butts has impressed his teammates, not just with his bat, wheels and glove, but with his approach to the game. He has the work ethic to become a future star for the Indians, who are going to lose three sensational seniors after this season — Setzer, first baseman Chance Bowden and outfielder Kyle Smith.

“Butts is a grinder, one of those guys who comes to practice every day, working as hard as he can to get better,” Setzer said. “The best thing about him is he’s team guy. He’s never trying to get his — he’s always trying to do what he can for the team. He’s doing his job every game. That’s all you can ask.”

Butts’ recent power surge has been an unexpected bonus for the Indians. He hit only two homers in his high school career, but Catawba coaches have tweaked his swing. He weighs about 175 pounds, but he’s sturdy and should wallop quite a few homers in his career at Newman Park.

In the long run, baseball is going to be better for Butts than football. He’ll take less of a beating. But it’s still hard to shake football out of his system.

His dream job after he graduates?

“I’d like to become a teacher,” Butts said. “And a football coach.”