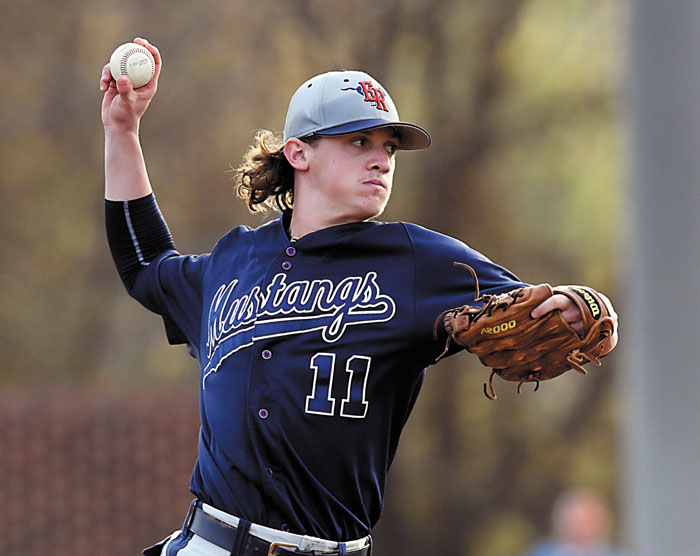 Despite playing defense like it was someone else’s job, the Mustangs beat rival West Rowan, 5-4, to win their own Spring Break Tournament for the second straight year.

“I’m glad we won, but we played a bad ballgame tonight,” East coach Brian Hightower said, after sophomore Wayne Mize drew a decisive, bases-loaded walk with one away in bottom of the seventh inning. “We played horrible defense. It was a disgrace to the game.”

East (10-4) committed six errors, two in each of the first three innings, and rallied from a four-run deficit to win its fourth straight game. Right-hander Will Brown earned a complete-game victory — his first in a varsity uniform — by blending an adequate fastball with a horizontal curve that teased West’s hitters before spinning off the plate.

“My curveball has gotten progressively better since I stopped throwing the slider,” Brown said after scattering six hits and and allowing just one earned run. “I was really comfortable throwing it tonight. Against this particular team, you almost have to pitch backwards — you know, a first-pitch curveball here or a first-pitch change-up there, just to keep them thinking.”

West (8-7) had won six of its previous seven games since dropping a bone-chilling, 6-1 decision at East on March 20. Last night pitchers Daniel Sell and Mauricio Salazar combined to walk four batters and surrender two unearned runs in the seventh inning.

“We didn’t deserve to win. We gave it to them,” said disappointed West coach Seth Graham. “They beat us last time. We game them this one.”

The Falcons batted around and scored four times in the top of the second, all after Brown retired the first two West batters. Infielder Cameron Graham triggered the rally with a two-out double to center-field and scored the game’s first run when East third-baseman Blake White lost a race to the bag after fielding Logan Sproul’s sizzling grounder. Two more runs crossed when Mykal Berger’s popup to shallow right-field was dropped and a fourth scored on another infield miscue.

“Down 4-0, that’s definitely hard on a team,” Brown said. “We just couldn’t harp on it for too long. You have to have faith in the team to get the next grounder, the next popup.”

Brown shut the door on West the rest of the way. He allowed only three singles over the last four innings and his defense choked off West rallies with double plays in the fourth and seventh stanzas. “What I loved about Will is no matter how much we screwed up, he never lost his composure,” said Hightower. “He kept pitching and got really good in the fifth, sixth and seventh. I though West had a good approach. They put the ball in play. But (Brown) just got better and better as the game went on.”

East chipped away, drawing within 4-1 on Bryson Wagner’s second-inning sacrifice fly against West left-hander Daniel Durham. An inning later, Mize delivered a one-out RBI-single before DH Jake Hunter coaxed a two-out, bases-loaded walk from reliever Henry Hall to make it a 0ne-run game. Brown, meanwhile, struck out the side in the sixth and retired 10 of West’s last 12 batters.

“We had that one big inning,” Graham said. “And then we stopped. We didn’t do anything else to win the game.”

East did. Pinch-hitter Avery Shull opened the last of the seventh by walking on a 3-2 pitch in the dirt from Sell. “Shull pinch-hitting was the key to that inning,” said Hightower. “On the 3-0 pitch he should have walked, but it was called a strike.”

Salazar relieved and walked Trevor Scruggs, putting Mustangs at first and second with none out. The tying run crossed when leadoff batter Hayden Setzer whipped a grounder through the legs of West first-baseman Jake Perez. “That ground ball was hit hit hard, but should have been a double play ball,” said Graham. “Ninety-nine percent of the time, that play gets made.”

After Brown was walked intentionally and a runner was forced at home, Mize sealed the verdict when he walked on a game-ending, 3-1 fastball. “I wanted to throw strikes and get him out some way,” Salazar said. “But I wasn’t going to throw it over the plate. It ended up way outside.”

That’s all it took for East to stink up the joint and still emerge smelling like a tray of cinnamon buns.

“We battled,” Brown said. “It takes a team to win — and I wouldn’t want to be with any other team right now.”

NOTES: Brown threw 95 pitches and induced 12 groundouts. … West shortstop Olen Stamper initiated double plays in the third and fourth innings. … Sell, a sophomore southpaw, allowed just an unearned run and one hit in three innings of stellar relief. … The Falcons host Salisbury in a non-league game next Monday. East returns to NPC action when it entertains North Iredell on April 10.