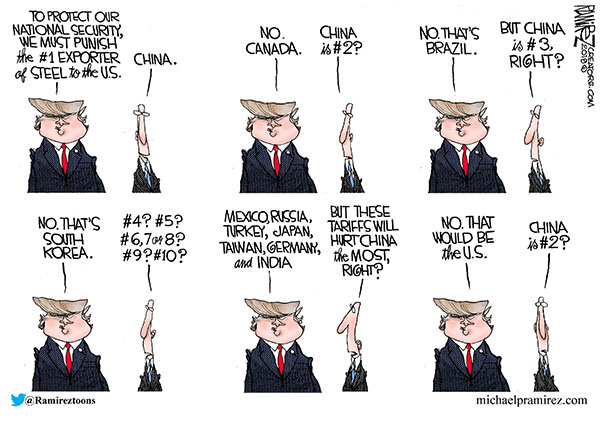 Other Voices: Trade war may wound our state

For the past few weeks, all the president’s talk about trade wars has been an abstract notion for most of us — a concern for policymakers in Washington but nothing that would come home to disrupt our daily lives.

But when China announced Monday that it’s slapping a 25 percent tariff on pork products in retaliation to President Trump’s tariffs on imported steel and aluminum, the global became local. It may be just a little sting, but we’re worried about what will happen if this is only the first round of a trade war soon to escalate.

North Carolina is the second-biggest pork-producing state in the country and most of the producers are in eastern North Carolina. According to pork industry statistics, Sampson and Duplin counties are the top two pork-producing counties in the country. Between them they raise more than a third of the more than 9 million hogs produced annually in this state. That’s a lot of spare ribs.

And in the case of China exports, that’s a lot of pigs’ feet, ears and stomachs, the primary products that China buys from American pork producers. According to a report this week by WUNC, North Carolina exported about $100 million in pork products to China last year. It’s unclear whether the new tariffs would kill that business. Equally puzzling is why China first targeted pork, since the Chinese company WH Group owns Smithfield Foods, this country’s largest pork producer, which also operates the world’s largest pork processing facility, just down N.C. 87 in Bladen County.

But then, China raises most of its own pork supply, importing only 3 percent of its pork products from the U.S. The biggest American pork importers are Canada and Mexico, a fact that should touch off big what-if concerns if the president makes good on his threats to blow up the North American Free Trade Agreement.

But that’s only the beginning of our worries. Trump and China are both making noises about escalating a trade war, and China is signaling that agricultural imports will be the earliest targets for new tariffs. Corn and soybeans — big business for North Carolina farmers — have already been mentioned.

The agricultural focus of China’s first wave of retaliatory tariffs makes it clear that the country is aiming a spear at the rural, agricultural parts of this country where the president has had the greatest support. If business is hurt and this causes Trump’s popularity to decline, there surely will be smiles in Beijing.

But if the trade war escalates, this state can be hurt in many more ways. North Carolina’s economy did $32.6 billion in export business last year and China was our third-biggest trading partner — trailing only Canada and Mexico. Overall trade with China last year brought $2.3 billion into this state’s economy. Chemicals are by far this state’s biggest export product, followed by transportation equipment, machinery, computer and electronic products and textiles and fabrics (yes, we’re still in that business, to the tune of $1.9 billion in exports last year). Again, we’re worried more about the fall of NAFTA here than a tariff battle with China, however painful that might be.

Given the delicate balance of a global economy, we doubt the president’s assurances that a trade war is easy to win, with few consequences for the American economy. But given the huge trade imbalance between the U.S. and China — we import from China vastly more than we export to it — it’s likely survivable.

But we’re much more worried about the president’s threats to tear up other trade agreements, especially NAFTA, which has turned the U.S., Canada and Mexico into what in many ways is a unified economy — much to the benefit of all three countries.

As much as the president wants to build a protective wall around this nation’s manufacturers, disrupting the global economy and free trade will cause far more harm than good for the American economy. We hope he heeds the early signs that this won’t end well for us.

Editorial: ‘We ask only for equal rights’