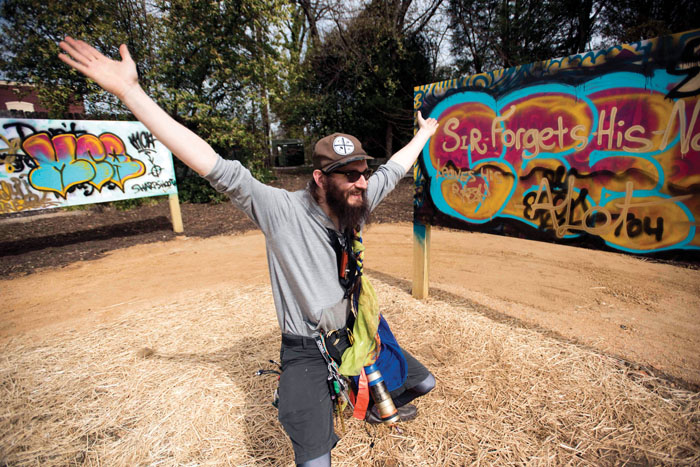 CaLeb Hill expresses his joy of the expanded graffiti park in Salisbury, which was recently improved to include a walking trail, landscaping and more surfaces for artistic expression. Jon C. Lakey/Salisbury Post

SALISBURY — For CaLeb Hill, the new graffiti park on South Main Street is a chance to “mess around with cool stuff.”

“It’s cool to get into a flow, to figure out how your wrist works. Because every artist is different because everybody’s skeleton is different,” Hill said. “A lot of these arches or angles and stuff like that are based off of their own geometry.”

Hill has been painting graffiti art for years and has recently been on a hiatus.

“But having this here, I’ve been able to get back into it,” Hill said. “I’ve found a community of people.”

Hill’s interaction in the park is the kind of experience city Parks and Recreation Director Nick Aceves hopes others will have.

“This is not traditional art in some people’s minds, and we want to give everyone a chance to express themselves,” Aceves said.

Aceves said the land the graffiti park is on has been owned by the city for five to seven years.

“Honestly, before it was just a little gravelly type lot with some spotted grass. And it didn’t look that great,” Aceves said. “And we thought, ‘How can we improve the current park that was there?’”

When landscape architect Stephen Brown and Public Services Department workers redesigned the space, they replaced two boards that were already there with 11 smaller boards.

“And hats off to them. It was a wonderful job, making it come to fruition as far as laying it out and putting the boards in,” Aceves said.

Jeremy McKeith, who has been painting graffiti for years, said he liked the larger boards because they gave him a larger canvas to work on. But he said the 11 smaller boards were a “fair trade.”

Most of all, McKeith said, he is excited to be able to paint graffiti legally. He said he has been arrested several times for painting graffiti on buildings.

“So I’m glad these are here,” McKeith said.

Hill said a lot of graffiti artists he knows are nervous about painting in the daytime. But he wishes more of them would do it.

“It’s like some people think you’ve got to be anonymous. And I’m like, ‘Not if you’re putting stuff where you don’t have to worry about putting stuff,’” Hill said.

Aceves said the idea for a graffiti park is twofold.

“It was to give people an area to express themselves, and it was also kind of a neat concept. You know, maybe it would curtail some downtown graffiti of buildings. Nothing is 100 percent foolproof, but this was just an outlet for people,” Aceves said.

The graffiti park closes at dark, just like the rest of the city’s parks.

“But we do know that graffiti artists prefer the cover of darkness to paint,” Aceves said. “We want people to feel welcome, especially here.”

Aceves also wanted to welcome people to use another artistic feature of the park — “expression boulders.”

“We’d love for high schoolers to come out, if they have theme weeks or spirit weeks. Come out and paint the boulders,” Aceves said.

Once the new grass and trees have grown, Aceves said he hopes the park will become a gathering place.

“People can come hang out and have a picnic here. A family or somebody by themselves maybe. Someone from a local business taking their lunch here. Sit amongst art,” Aceves said.

Hill said he is hoping for something similar.

Hill said because graffiti is painted at all hours of the day, the park is a sort of “immersive art” experience.

“Whether you make art or not, you get to see people make it,” Hill said.