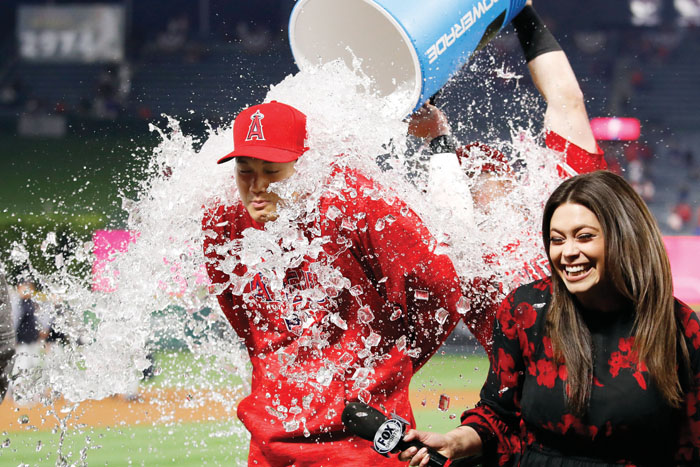 By DAN GREENSPAN, Associated Press
ANAHEIM, Calif. (AP) — Shohei Ohtani hit his first major league home run in his first Angel Stadium at-bat to help the Los Angeles Angels beat the Cleveland Indians 13-2 on Tuesday night.
Ohtani capped a six-run first inning by lifting a ball out to center on a 2-2 count against Josh Tomlin. The Japanese two-way player got the silent treatment from teammates when he returned to the dugout, but not from the crowd. After players broke character and jumped around Ohtani to celebrate, Mike Trout pointed to the field and instructed Ohtani to take a curtain call.
Ohtani is the first player to win as a starting pitcher, then start and homer as a non-pitcher in his next game in the same season since Babe Ruth in 1921, according to Fox Sports West.
“It obviously felt really, really good,” Ohtani said through an interpreter, drying himself as he spoke to the crowd after teammate Kole Calhoun surprised him with a bucket of icy water after the game.
Trout, Justin Upton and Luis Valbuena also homered for the Angels, who broke a 12-game losing streak to the Indians. Rene Rivera had four RBIs, including a two-run homer in the eighth.
Garrett Richards (1-0) gave up two runs and one hit while striking out nine in 5 2/3 innings.
Jose Ramirez hit a two-run home run in the first for the Indians, but Tomlin (0-1) gave up eight runs and eight hits in three innings.
Trout’s second home run of the season opened the scoring for the Angels, a solo shot off the wall in right-center.
Ohtani’s shot would have been a grand slam, except Calhoun had scored on a wild pitch earlier in the at-bat. He finished 3 for 4, including a hard-hit line drive for a single in the eighth. Statcast measured the latter hit at 112.8 mph, the hardest hit ball by an Angels player this season.
The homer was Ohtani’s second hit in the majors — his first was in his first big league at-bat, at Oakland last Thursday. He also struck out the first batter he faced in his first start as a pitcher Sunday.
Ohtani will pitch against Oakland on Sunday in his first start at home.
Upton picked up his first home run for the Angels in the second to make hit 7-2, and Valbuena had a solo homer in the third.
The Angels added three runs in the fifth, with Rivera’s double driving in two.
TRAINER’S ROOM
Angels: RHP Matt Shoemaker was placed on the 10-day disabled list with soreness in his right forearm. Parker Bridwell was recalled from Triple-A and will start Friday against the A’s. Shoemaker was limited to 14 starts last season and had surgery last August to address nerve pain in his right forearm.
UP NEXT
Indians: RHP Corey Kluber (0-1) starts Wednesday in the finale of the three-game series. Kluber went eight innings at Seattle on Thursday, giving up two runs on six hits in a 2-1 loss.
Angels: LHP Tyler Skaggs (1-0) did not give up a run in 6 1/3 innings in a 2-1 win over the A’s on Friday. Skaggs is 4-1 in 11 career starts in March and April.
___
More AP baseball: https://apnews.com/tag/MLBbaseball