Georgie Anne Geyer: Leaving Syria for all the wrong reasons 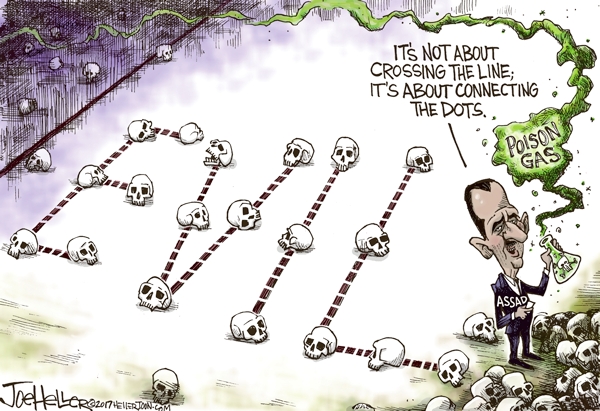 WASHINGTON — The president’s latest words on one key area of foreign policy are odd, even coming from him. I say that not in righteous anger or personal mortification, nor as ideological confrontation; the fact is, they are just odd.

I speak of his words on Syria. “We’ll be coming out of Syria, like, very soon,” Trump said. “Let the other people take care of it now … Very soon, very soon, we’re coming out.”

The words were so curious that for a few days even our allies in the Syrian disaster barely responded. Pentagon military officers, speaking during Easter week, said they knew not what he meant. Kurdish Syrians whom our troops had supported against the Assad regime seemed momentarily to stand still on the road to Damascus.

President Trump’s words were thrown out as a kind of thought-in-the-dark during a speech supposedly on infrastructure in Richfield, Ohio. The “Syrian question” came up again on Good Friday when The Wall Street Journal reported that Trump had also ordered the State Department to freeze more than $200 million in funds for recovery efforts there.

Reuters then reported that White House national security advisers had recommended that U.S. forces should stay in small numbers for at least a couple of years to make sure gains against the ISIS militants hold, but also to ensure that Syria does not essentially become a permanent Iranian base.

Now, in many ways, the Trump quotes remind one of the famous/infamous comments from British Prime Minister Neville Chamberlain in 1938, when he returned to London from meeting Hitler in Germany, telling the British people they had been spared “a quarrel in a faraway country between people of whom we know nothing.”

Today, most Americans could not find Syria on the map. Pictures of the terrible suffering of the Syrian people have touched many, but who ARE they, really?

In June 2013, even the Obama administration, which came to power railing against our interventions abroad, was torn by the tragedy enfolding inside Syria and gave direct military support to American-aligned opposition forces. These groups, especially the Syrian Kurds, part of a larger dispersed “nation” of Kurdish nationals from across the northern Middle East, trusted us. They shouldn’t have.

With President Trump’s words — IF they are true expressions of anything — we have effectively given Syria over to the “other side,” and that other side is the Russians, the Iranians, the Hezbollah radical Islamists and, of course, the Assad tyranny, which in the end has won.

Now, you will doubtless immediately divine from these words that I am just another one of those Trump-bashers in the media, but you would be wrong. If I believe in any theories in foreign policy, I belong to the “realist” school; I’m closer in thinking to Henry Kissinger and the late Zbigniew Brzezinski than Barack or Hillary.

In fact, I could tear my hair that, since roughly World War II, no American president has been able to resist the temptation to meddle in affairs in those faraway countries, of which we know far too little. Remember, even Barack Obama originally described Syria as “someone else’s civil war.”

Syria has turned out to be one of the worst case studies of American interventionism since the Vietnam War, not because our presence is so huge (currently, we have only 2,000 troops there), but because the entire chapter is so hopeless, so dirty and so without purpose.

When we did go in, we went in sloppily, with no understanding of tactics and no strategy for gain, much less victory.

When we hung around the bloody battlefields, depending on our proxies to preserve our own lives, we had not the slightest idea of what was possible. When we leave, if Trump’s words are true, it will only serve to make our enemies smile — in Russian, Arabic and Persian.

In many ways, President Trump has been right: He was right during his campaign when he criticized our interventions in Iraq and Afghanistan, and he was right recently when he decried the waste of the approximately $3 trillion those wars have cost America, denying the nation many of the things it truly needs.

The problem is, he doesn’t know WHY he is right. And neither he nor the other American presidents of our times have ever come close to addressing the real problem: that America cannot run everything in the world. We need to make choices, not at the end of a civil war, but in the beginning.

Georgie Anne Geyer has been a foreign correspondent and commentator on international affairs for more than 40 years. She can be reached at gigi_geyer@juno.com.

Editorial: ‘We ask only for equal rights’