A Masters for the aged? 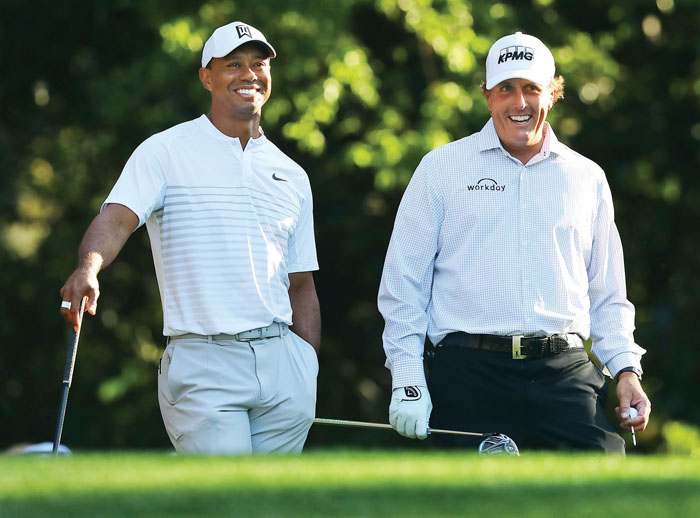 Tiger Woods, left, and Phil Mickelson share a laugh on the 11th tee box while playing a practice round for the Masters golf tournament at Augusta National Golf Club in Augusta, Ga., Tuesday, April 3, 2018. (Curtis Compton/Atlanta Journal-Constitution via AP)

AUGUSTA, Ga. (AP) — They’re older now, no longer the 20-somethings who together helped usher golf into a new era.

The evidence of that isn’t in their golf swings, but in their appearance. When Tiger Woods takes off his hat after a round, there’s a pronounced bald spot in the back and Phil Mickelson looks, well, like a guy should look as he approaches the half century mark in life.

But here at the Masters, against a field loaded with young talent, they’re among the favorites.

Not just of the fans, who enjoyed the unlikely pairing of Mickelson and Woods in a rare practice round together on Tuesday. Oddsmakers in Vegas think both have a good shot at donning the traditional green jacket on Sunday, and if it’s Mickelson he would be the oldest Masters champion ever.

“We’re at the tail end of our careers, we both know that,” Woods said. “He’s 47, I believe, and I’m 42, and we have had a great 20-year battle, hopefully we’ll have a few more. But we understand where we are in the game now versus where we were in our early 20s, battling for who is going to be No. 1. And that was then and certainly this is now.”

If there’s any comfort for both players it lies in the history of the Masters, where Jack Nicklaus not only won at the age of 46 in 1986 but was contending on the final day a dozen years later at the age of 58.

Add in the fact they own seven green jackets between them and it’s not so farfetched they will at least be in contention on the weekend.

“I would give Phil a much better chance to win than Tiger,” said Butch Harmon, who taught Woods when he was young and was with him when he won the 1997 Masters in historic fashion. “Not that I’m saying Tiger can’t win because I wouldn’t say Tiger can’t do anything because he will prove you wrong. But Tiger hasn’t won in a long time.”

Harmon also worked with Mickelson for a period of time and believes he is riding a wave of confidence after winning the Mexico championship last month.

“Phil is still competitive and I don’t think Phil Mickelson gets the credit he should get,” Harmon said. “He’s won 43 tournaments and five majors in the Tiger Woods era. No one else has come close to that, mainly because Tiger was winning all the others.”

Both players bring some baggage into this Masters, though it’s not talked about in the interview room or among the fans who swarmed to watch them in the practice round.

For Woods, it was the DUI last year where he was found disheveled and incoherent on a Florida highway. Toxicology reports revealed five different drugs in his system and he later pleaded guilty to reduced charges and received a year of probation and 50 hours of community service.

Mickelson, meanwhile, was linked to an insider trading scheme that sent high stakes gambler Billy Walters to prison . Mickelson paid back nearly $1 million in ill-gotten gains in the case and, according to published reports, had owed Walters nearly $2 million in gambling debts.

They’ve had fewer problems on the golf course itself recently, with Woods contending in his latest comeback and Mickelson winning in Mexico.

It was Woods, of course, who transformed golf 21 years ago by winning his first Masters at the age of 21. Beset alternately by back and personal problems in recent years, though, he’s been stuck on 14 major championships for a decade now.

Woods talked Tuesday about how his swing speeds are still what they were before he hurt his back and he showed he can not only keep up with the younger players off the tee but sometimes hit it past them.

And, of course, he’s got the experience that playing Augusta National in competition 78 times over 20 Masters can bring.

“I’ve played well over the years, I’ve won here a few times, but all those years that I’ve won, one part of my game has certainly stood out,” Woods said. “And whether it’s driving the ball like I did in ‘97 and putting it a couple years where I really putted well or hitting my irons and hitting a lot of greens, but not only missing, missing in the correct spots every single time, there’s got to be some sort of certain part of my game that’s got to be on, and hopefully this will be one of those weeks.”

Harmon, for one, thinks nothing would be better for golf should that happen.

“I think the jury’s still out on him,” Harmon said. “I would hope he could do it because it would be the best thing in the world for the game. The reincarnation of Tiger Woods at age 42 would be pretty cool.”