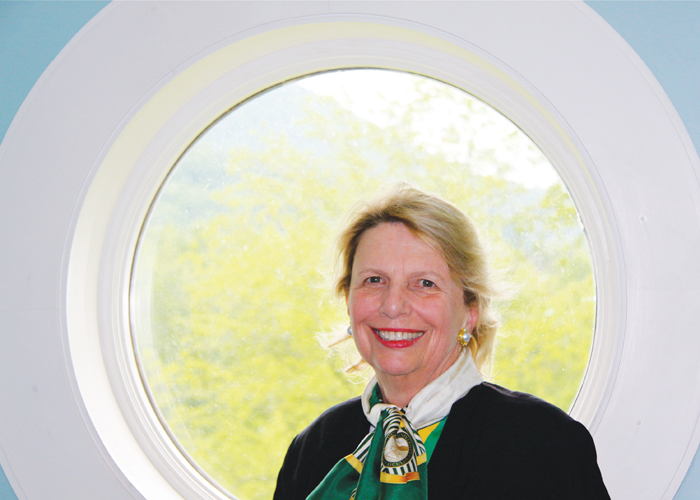 Salisbury native Wyndham Robertson will talk about growing up in the city as the featured speaker at the Historic Salisbury Foundation’s annual meeting April 12.

All members and prospective members of the foundation are invited to attend the meeting at the Historic Salisbury Station, beginning at 7 p.m.

A brief business meeting and the executive director’s yearly review will be followed by Robertson’s talk. A reception will follow.

Robertson may currently live in Chapel Hill, but many in Salisbury consider her to be one of their own. She has been quietly active in philanthropy in Salisbury and Rowan County for several decades.

Robertson is the youngest child of the late Blanche Spencer and Julian H. Robertson Sr. and a 1954 graduate of Boyden High School. Voted the “Most Influential” superlative her senior year at Boyden, Wyndham proved her classmates’ choice was the correct one.

After college, she had a distinguished career in journalism and education. In both areas, she “broke the glass ceiling by occupying positions that a woman had never held,” said classmate Betty Dan Spencer.

“Wyndham is possessed of great wit, and I look forward to hearing her recount the halcyon days of growing up in Salisbury,” Spencer said.

Robertson is a graduate of Hollins University, where she majored in economics. After a brief stint with Standard Oil, Robertson went to work as a researcher for Fortune magazine, one of the country’s most prestigious business periodicals based in New York.

Only men could be writers in those days, but that did not stop Robertson. Over a 25-year period, Robertson rose through the ranks, becoming a writer, a member of the board of editors and eventually the first woman named assistant managing editor.

While at Fortune, Robertson won a Gerald M. Loeb Award for Distinguished Business and Financial Journalism.

In 1986, C.D. Spangler, then president of the University of North Carolina, persuaded Robertson to move south and become vice president of communications for the 16-campus university system. Among other responsibilities, Robertson oversaw the UNC Center for Public Television.

She was inducted into the North Carolina Hall of Fame in Journalism, Advertising and Public Relations in 2013 and was awarded an honorary doctor of laws degree from the University of North Carolina in 2015.

Robertson’s storied career includes membership on a number of corporate and philanthropic boards. Berkshire Hathaway nominated her to the board of Media General, and she served on Wachovia and ABC/Capital Cities boards, among others.

She was a trustee of Hollins University for 30 years, chairing its board at one point. She holds the distinction of having a National Literary Landmark named after her, the Wyndham Robertson Library at Hollins University, recognized for its historical influence on American literature.

Community organizations throughout Salisbury and Rowan County benefit from the philanthropy of the Blanche and Julian Robertson Family Foundation, which was established in 1997 by the Robertsons’ three children, Julian, Blanche and Wyndham. Wyndham Robertson continues as an active member of that foundation’s board.

She is knowledgeable about the community’s needs and works to help fulfill them. In that respect, Robertson is following in the footsteps of her parents, especially her mother, Blanche.

Blanche Spencer Robertson was active in Salisbury’s civic community throughout her life. She was a founding trustee of Historic Salisbury Foundation, serving 17 years, including three terms as vice president, before she stepped down and was named trustee emerita.

“Blanche Robertson was among the six outstanding women who were original trustees of Historic Salisbury Foundation in the 1970s and who gave great strength and impetus to the new preservation organization,” said longtime trustee Edward Clement. “This organization would not be what it is today without the help of community leaders like Blanche Robertson.”

For more information or to make a reservation for the annual meeting, call the foundation office at 704-636-0103 before Friday.