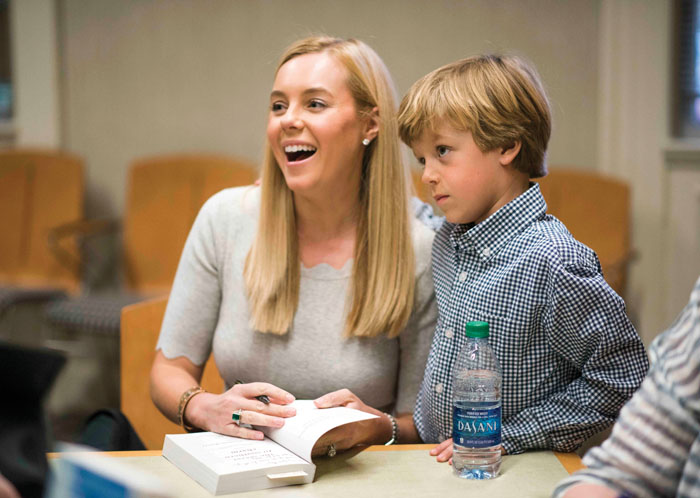 Kristy Woodson Harvey signs a copy of her newest book under the watchful eye of her son Will. Harvey, an author from Beaufort who grew up in Salisbury, was the program speaker at the Friends of the Rowan Public Library Annual Meeting on Monday evening. Jon C. Lakey/Salisbury Post

SALISBURY — On the eve of the release of her fourth book, author Kristy Woodson Harvey returned home.

The Salisbury native spent Monday evening visiting with and speaking to the Friends of Rowan Public Library during the organization’s annual meeting. Harvey mingled, signed copies of the new book — “The Secret to Southern Charm” — and talked about how life in Salisbury shaped her.

“It’s really great to be able to launch this book in my hometown. It’s really nice,” Harvey said.

Harvey’s story, and that of her Peachtree Bluff series, is one of change. She was on a book tour for her second novel when she unintentionally pitched the idea for the Peachtree Bluff books to an editor.

In that moment, she said, she went from being an author who worried about being a has-been to landing a series contract with one of the most successful editors and publishing houses in the business.

“Right then, in that moment, my story changed,” Harvey said Monday.

But Harvey’s story started in Salisbury — specifically, at the library.

“Libraries have been a really important part of my story,” she said. “Especially the Rowan Public Library.”

Harvey recalled going to the library once a week and checking out as many books as she could. An avid reader, it didn’t take her long to burn through them.

But it was a decision to check out Betty Smith’s “A Tree Grows in Brooklyn” that helped set her on the path to becoming an author. Monday, Harvey described sitting on a balcony at a beach condo and reading about main character Francie Nolan sitting on her fire escape.

When it came to backgrounds, the two girls could not have been more different — but they still echoed each other.

It was a realization that grew when she interned at the Salisbury Post when she was 17. Harvey was often assigned fluff pieces, about oddly shaped vegetables or other topics the full-time writers didn’t want to cover. But she found meaning in it.

“I was writing about people and about their families,” she said. “… I hadn’t really realized yet that we all had a story to tell.”

Harvey credits that experience as the foundation for the stories of small-town Southern life that make up her books. And the experience was enough for her to change her career plans, from medicine to journalism.

Years later, with two degrees in English, working a finance job, newly married and transplanted to New Bern, Harvey set out to write. She was 25. By 27, she had acquired an agent, and a few years later she landed a book deal.

“Suffice to say I had no idea what I was doing,” she said with a chuckle.

She recalled one conversation in which her agent told her that her books would be published in Polish.

“How are they going to translate all those ‘Y’alls?’” she asked.

“The good thing is you’ll never know,” he told her.

Harvey finished her talk by reading an excerpt from her new novel that revealed the true secret to Southern charm.

Book 2 in the Peachtree Bluff series, “The Secret to Southern Charm,” is available for purchase today.