George Jackson: The resurrection of King: Push for nonviolent social change is reborn 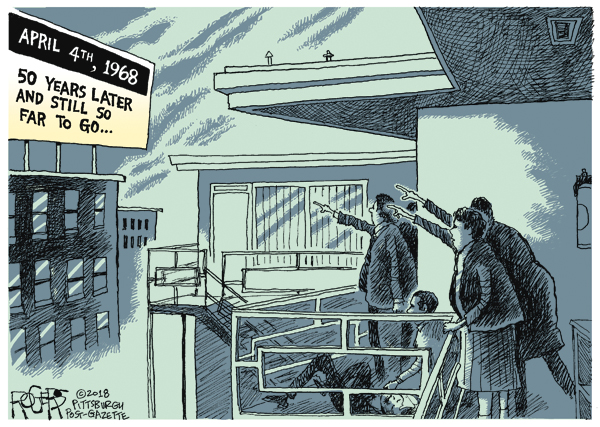 I remember my first-grade teacher Mrs. Graham giving out parts for the Black History Week program at Monroe Street School in late January 1968. She handed me a paragraph to memorize for the play in February.

Greg got to be Flip Wilson. Jackie played Althea Gibson. Brian was O.J. Simpson. I was to close the play as Dr. Martin Luther King Jr., in a black choir robe.

I will never forget my speech, “This will be the day when all of God’s children, black men and white men, Jews and Gentiles, Protestants and Catholics shall sing in the words of the old Negro spiritual, ‘Free at last, free at last, thank God Almighty, we are free at last.’ ”

I felt a great love for Martin Luther King Jr. from the moment I received my script. I had never heard a black man speak with such confidence, power and authority.

Two months later my Dad came home from work and called the family into the living room. For the first time in my brief life I saw him crying. He said, “They killed Martin Luther King.”

My heart dropped. What does that mean for us? Are we going to be OK? A strange fear gripped me as I watched news reports of grief and riots across America.

As Easter approached the Sunday after Dr. King’s funeral, my West End community was in mourning. My Dad preached about the glorious resurrection of Jesus the Christ, our Messiah. I prayed to God that my hero, too, could be resurrected from the dead. That was 50 years ago.

Two generations have passed. Our nation has endured great trials and overcome many obstacles in the experiment called democracy. And yet, for multitudes of people of color beyond the age of 50 years old, Martin King is still our yardstick and point of reference as to how far America has progressed or regressed. Fifty years later a man often referred to as “an outside agitator” is now honored with a federal holiday in all 50 states.

I still believed in the power of our Lord’s resurrection, a power that makes all things new. Fifty years after a little boy prayed that God would raise Martin King from the dead, Colin Kaepernick took a knee in a peaceful protest like King did on the Edmund Pettus Bridge in Selma. Fifty years later, women across America would unite to end the silence of sexual harassment in peaceful mass protest and declared “me too.”

Fifty years after King, a senseless act of terrorism (like the senseless act that took him from us on April 4, 1968) would again unite peace-loving people. From the carnage of death in Parkland, Florida, a new movement emerged.

High school students from across America have picked up the mantel as it fell from Dr. King’s hand and raise it in solidarity in the “March for our Lives.” They took a page of King’s Birmingham strategy and put high school and even middle school students on the front lines of social change.

As I watched in awe of these young patriots and their “Never Again” movement fill the nation’s capital with more than 500,000 social activists, my heart was filled with joy as a surprise guest walked on the stage.

Yolanda Renee King, 9-year-old granddaughter of Martin Luther King Jr., told the massive crowd she, too, has a dream, like her grandfather two generations ago. As I wiped away tears of joy

I thanked God for remembering a little boy’s prayer and resurrecting my beloved hero.

Dr. George B. Jackson is the chairman of the Martin Luther King Social Action Committee.