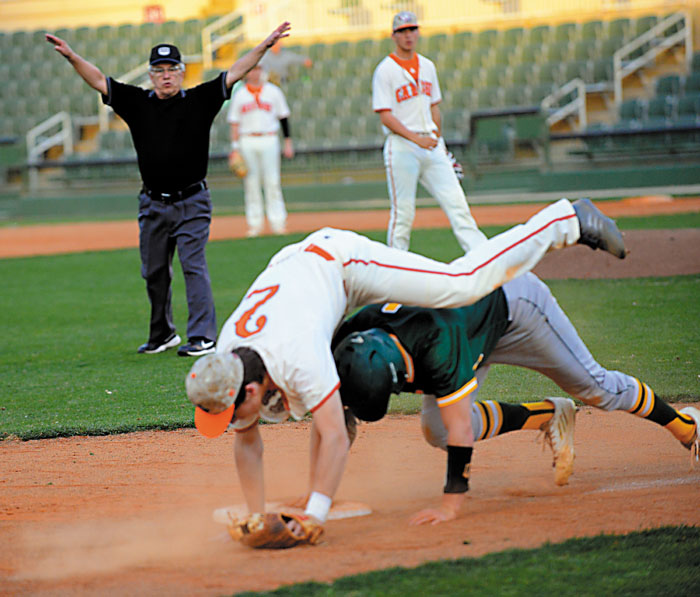 West Forsyth's Davis Latham 1 was safe at 3rd base as he dives under Cole Hales 2. photo by Wayne Hinshaw, for the Salisbury Post

The Titans made themselves right at home in their first F&M Bank Classic championship game, stroking 14 hits and ending Carson’s 10-game winning streak with a 10-2 victory.

“They definitely were the better team tonight,” losing coach Chris Cauble said after CHS (11-4) suffered its first loss since March 5. “I’d like to play a three-game series and see who the better team is, but they were clearly better than us tonight.”

After leveling everything in their path the past month, the Cougars were unplugged for this one. Starting pitcher Clayton Gilmore was ineffective, yielding six earned runs and seven hits in just 2 2/3 innings.

“I didn’t have my best stuff today,” the senior right-hander said. “But that’s a good team over there. A lot of their guys can swing it. I just didn’t come prepared and focused.”

Gilmore hit three of West Forsyth’s first nine batters with pitched balls, giving the Titans (12-3) a jumpstart toward their fourth straight win. He allowed Gianni Smith’s two-run double in the top of the first inning, then surrendered a two-run single to Davis Latham and a two-run double to Peyton Idol in the third.

“Our guys came out and hit the ball very hard tonight,” said West Forsyth coach Brad Bullard. “We knew they had some great arms, but we put six runs on the board in the first three innings. You get down 6-0, that’s hard to come back from. We went through a couple weeks where we weren’t hitting very well. It was nice to see the bats get going.”

Smith, a tall right-hander with a heavy fastball, earned his third victory on the mound. He allowed two runs — both unearned — and struck out seven in 4 1/3 innings before exiting with the bases loaded and an eight-run lead.

“Our guys were saying he was the hardest thrower we’ve faced to date,” Cauble said. “And we’ve faced some really good pitching. For them to say that, he must have been throwing pretty good.”

Smith’s best pitch may have been the sweeping, 3-2 fastball that caught Gilmore looking with two away and the bases loaded in the last of the fourth. “It was out (of the strike zone) and it stayed out,” insisted Gilmore, a right-handed batter. “The pitch right before it was very similar and it was a strike. But that one didn’t start as a strike or end as a strike.”

Bullard, who’s team was playing its fifth game in seven days, said the ring-up may have been a game-changer.

“I was over here to the side,” he said. “But obviously getting that strikeout-looking right there was big for us. We already had some momentum, but that gave us even more.”

Carson scored both of its runs in the fifth inning. Cam Prugh coaxed a one-out walk, Owen White steered a single into left field and both runners advanced on a passed ball. When Luke Barringer drew a walk to load the bases, Smith was spelled by 6-foot-7 reliever Jordan Goco. Carson’s Maddux Holshouser greeted him with an infield grounder that was juggled, plating the Cougars’ first run. Their second came when Cole Hales was walked with two outs.

The final two innings were not without controversy. Facing Carson fireman Sollie Holshouser, West Forsyth put runners at first and second base with two down. Speedy No. 9 hitter Matt Chilson then bounced a ground ball to White at shortstop — and his throw to first-baseman Logan Rogers arrived a hair late. But the field umpire, facing first base, called Chilson out — then immediately reversed the call, allowing a run to score on Rogers’ hurried throw home as baserunners to advance to second and third.

“The right call was made. He was safe,” Cauble said after a short protest. “I wasn’t arguing out or safe. But he called him out and then called him safe. I wanted the umpire to put the runners back (on first, second and third), because you can’t put a defense in that position. He did call him out, but he changed it.”

It all went for naught. When Goco induced C.P. Pyle’s game-ending flyout, the right-hander had retired seven of Carson’s last eight batters and the Titans had completed a three-game guided tour through the tournament.

“This would have been nice,” said Maddux Holshouser. “But it’s not our only goal. We’re hoping to go all the way this season. We can keep this in the back of our minds or we can throw it out. Either way, we’ve got to keep going.”

NOTES: Carson left 10 runners on base, including three in both the fourth and fifth innings. … The Cougars finished with seven singles. West, winner of five of its last six games, slugged three doubles. … Conference-leading Carson is idle until April 10, when it resumes NPC play at South Iredell.