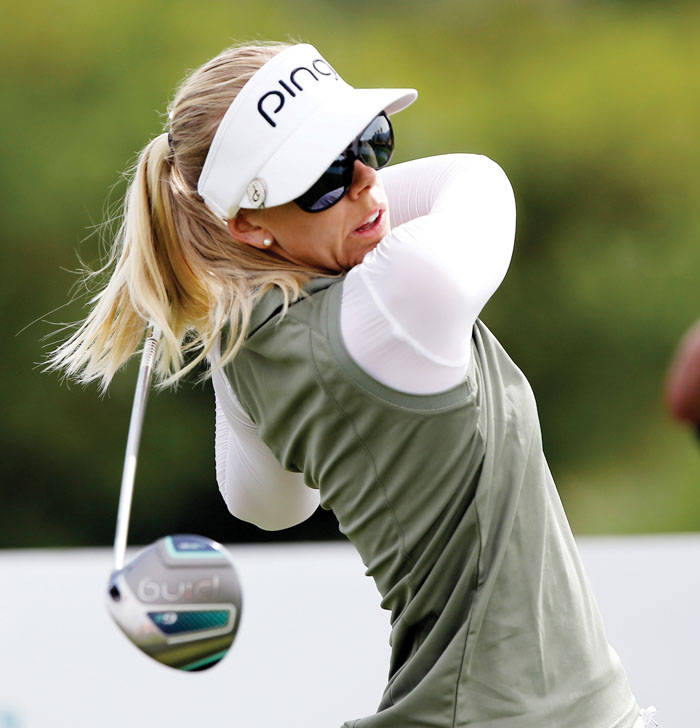 Pernilla Lindberg, of Sweden, hits from the the sixth tee during the final round of the LPGA Tour ANA Inspiration golf tournament at Mission Hills Country Club in Rancho Mirage, Calif., Sunday, April 1, 2018. (AP Photo/Alex Gallardo)

RANCHO MIRAGE, Calif. (AP) — Inbee Park and Pernilla Lindberg played until it was too dark to see Sunday night — and still couldn’t decide the ANA Inspiration.

They’ll return to Mission Hills this morning for the fifth extra hole in the LPGA Tour’s first major championship of the season.

Jennifer Song dropped out with a par on the third playoff hole, and Park and Lindberg decided to take one more trip down the par-5 18th in fading light.

With portable lights and the scoreboard helping illuminate the green, Park made a 6-foot par putt and Lindberg made a short putt to match. They finished at 7:21 p.m., 15 minutes after sunset.

Play will resume at 8 a.m. on the par-4 10th in the first Monday finish in tournament history.

On the third extra hole, Park hit a wedge from the rough to 11/2 feet to set up a birdie, and Lindberg made a 5-footer. Song missed a 10-foot birdie try.

Park and Song had putts to win on the first two extra holes. Park missed from 15 feet on the first, and Song’s 7-footer went to the right on the second. Park scrambled to save par on the second playoff hole after hitting into the right fairway bunker and nearly hitting her third into Poppie’s Pond right of the green.

All three players birdied the par-5 18th, with Song getting to 15 under first with a 5-foot putt. Park followed with a 4-footer in the next group, and Lindberg matched her in the final group. Park and Song shot 5-under 67, and Lindberg had a 71.

Park won in 2013 at Mission Hills and is a seven-time major champion. The 29-year-old Hall of Famer won the Founders Cup two weeks ago in Phoenix for her 19th tour title, a day after revealing she was 50-50 about retiring before returning from a long break. She returned to play a month ago in Singapore after not playing since the Women’s British Open in August.

Lindberg, the third-round leader, is trying to win her first professional title. The 31-year-old Swede made a series of par saves before hitting close on 18 to set up the tying birdie.

Jessica Korda (66) and Ariya Jutanugarn (65) were a stroke back.