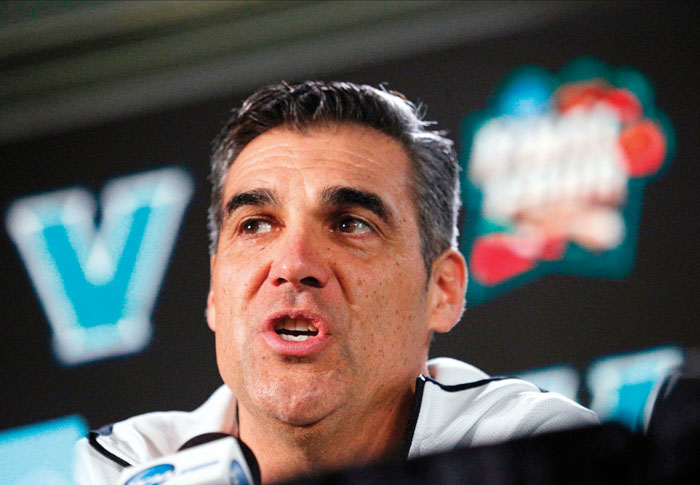 After more than three decades between Villanova’s first two national championships, the Wildcats are going for their second title in three seasons. Coach Jay Wright’s team set NCAA single-season (454) and NCAA Tournament records (66) for 3-pointers while making a Final Four game-record 18 in the semifinal win over Kansas. Michigan is in its seventh national title game. The Wolverines have won only one, beating Seton Hall in overtime in 1989.

This is John Beilein’s 40th season as a college head coach, and his 11 with the Wolverines mark his longest tenure of the seven schools he’s coached. Beilein, still without a national title, has 248 of his 799 career wins at Michigan. Wright, the sharp-dressed coach who Beilein described as having George Clooney looks, is in his 17th season at Villanova. Wright has a 421-165 record with the Wildcats after 122 wins in seven seasons at Hofstra.

Michigan starting guards Zavier Simpson and Muhammad-Ali Abdur-Rahkman were a combined 2-of-17 shooting for seven points in the national semifinal win over Loyola-Chicago. All of those points came from Abdur-Rahkman, though he was only 2-of-11 shooting — 0-of-5 on 3s.

One of the biggest assists in Villanova history was by 2016 Final Four MVP Ryan Arcidiacono, who was dribbling toward the basket when he passed to teammate Kris Jenkins for a buzzer-beating 3-pointer and a 77-74 win over North Carolina in the national title game. The Wildcats are still sharing the ball in big moments. In their semifinal game against Kansas, they had 20 assists on 36 made baskets — and assists on 12 of the 18 made 3-pointers. Jalen Brunson, the AP national Player of the Year, and Phil Booth each had six assists.

The Wolverines have made it through the NCAA Tournament without facing a top-5 seed — until now. After beating the Nos. 14, 6, 7 and 9 seeds in the West Region, they played their first game in the Alamodome against Loyola-Chicago, only the fourth No. 11 seed to make it to the Final Four. Villanova was the No. 1 seed in the East Region.