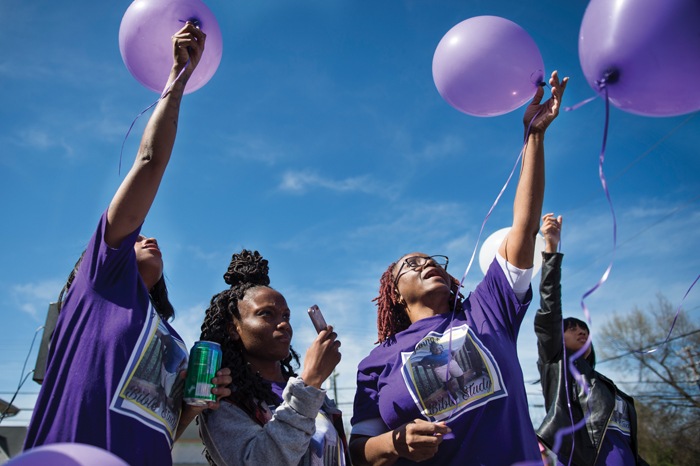 EAST SPENCER — There was a mix of emotions as the family of A’yanna Allen and the community gathered this weekend to commemorate the anniversary of a bi-monthly Bible study that was established in memory of the slain 7-year-old.

Southern City AME Zion Associate Pastor Mike Mitchell said the church wanted to have a fellowship event where the children could have fun, eat, and listen to music. A year ago, the church began the Bible study Easter weekend.

During each Bible study, the ministers tackle different topics such as violence or have guest speakers and, most of the time, have refreshments. There will be pizza served at the Bible study.

“It means everything to me to have a lot of support. I’m just so happy,” said A’yanna’s mother, Shequita Woodberry.

Woodberry, who had moved out of state last year, has since returned to Rowan County.

A’yanna Allen was killed on Dec. 4, 2016, after someone fired shots into the home of her grandmother, Shirley Robinson. A’yanna was shot up to 13 times, which caused 20 different wounds on the young girl’s body from her head to her toes and fingers.

Salisbury Police investigators say prior to the shooting at Robinson’s Harrel Street home, someone killed Sharod Mathis at Firewater Restaurant and Lounge following an altercation there. Both murders are unsolved.

Samirah White-Blackwell said she hopes children from other churches and other communities join the Bible study.

“In the word of God we have a responsibility to make sure we train up a child in the way that he should go and when he is old he will not depart from it,” White-Blackwell said.

Robinson said the weekend event was great because many of A’yanna’s brothers and sisters, cousins, aunts and other family were there.

“I enjoy seeing people that remember her,” Robinson said.

She was pleased with the turnout and it made her think about if A’yanna were there she’d be dancing with the other children and eating.

Jabria Hopkins, the older sister of A’yanna Allen, said she was also glad that everyone was there and having fun.

Although the event was a time of fun and fellowship, it also brought tears for A’yanna Allen’s aunt, Roneshia Woodberry.

Roneshia Woodberry said some days are difficult for her and today was no exception. She said events like this and family occasions bring her to tears because A’yanna isn’t there.

“It’s a relief. The good outweighs the bad,” she said as to dealing with the loss of her niece.

She said her family just tries to uplift one another.

Rashedia said she hopes the Bible study continues to grow and draw others in the community to attend.

She also called upon anyone who has information into the death of her niece to come forward.

“Please speak up,” she said.

Those who gathered also released purple and white balloons in honor of A’yanna Allen as her favorite song, “Take Me To the King” by Tamela Mann was played.

Many of the children who attend the Bible study attend area churches including Southern City AME Zion and Mount Calvary Holy Church.

Anyone with information in the shootings of A’yanna Allen and Sharod Raheen Mathis are asked to contact the Salisbury Police at 704-638-5333 or Salisbury-Rowan Crime Stoppers at 1-866-639-5245.