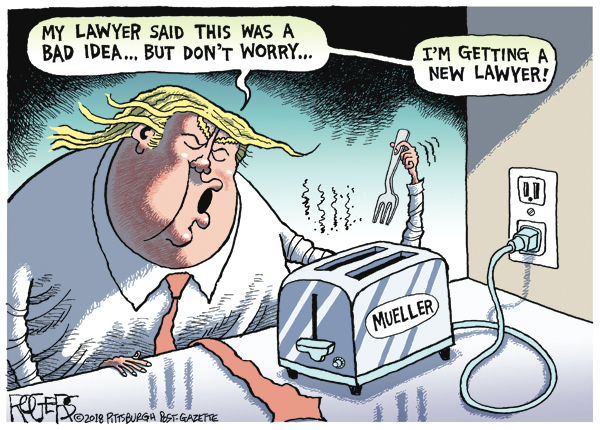 Lost in the debate over whether President Donald Trump should talk to special counsel Robert Mueller is this: The arguments against him doing it often betray a remarkably dim view of Trump’s intellect.

To his credit, former New Jersey Gov. Chris Christie was rather blunt Sunday in making the case for Trump refusing the interview. He said flatly on ABC’s “This Week” that he worried Trump wouldn’t be able to stop himself from committing perjury (comments start at 8:47 in video).

“He should never walk into that room with Robert Mueller. Because in the end, one of the things that makes the president who he is, is that he’s a salesman. And salesmen, at times, tend to be hyperbolic. Right, and this president certainly has tended to do that.

This kind of argument has become rather common when it comes to Trump, but let’s step back for a second and focus on what Christie is really saying: He is saying that not only is Trump prone to hyperbole because he’s a salesman but that Trump can’t be trusted to tell the truth even when not doing so constitutes a felony. Christie is basically suggesting that a 71-year-old man who happens to be the president of the United States can’t differentiate well enough between truth and fiction (or what Trump himself has called “truthful hyperbole).”

Others who have argued that Trump shouldn’t talk to Mueller have danced around this point a little more artfully. Christie has said in the past that he didn’t think the evidence warranted an interview with a sitting president. White House lawyer Ty Cobb and others have alluded to the prospect of a “perjury trap” – the possibility that the interview could basically be an elaborate setup to get Trump to make a false statement.

And some aides have anonymously acknowledged that Trump just isn’t good with details or the truth. Post contributor Daniel Drezner has been keeping a running tally of aides talking about Trump as if he’s a toddler.

Daniel W. Drezner tweeted, “I’ll believe that Trump is growing into the presidency when his staff stops treating him like a toddler.”

But Christie on Sunday basically came out and said what everyone is saying behind closed doors. In the debate over whether Trump is a habitual fabulist or just a strategic one, Christie seems to be coming down on the side of the former. He seems to confirm that Trump doesn’t really know what the truth is.

We still don’t know whether Trump will grant the interview. But his personal attorney John Dowd reportedly left Trump in part because of frustration with the president’s insistence on testifying and apparent concern that Trump might perjure himself. Other lawyers, it seems, may have similar concerns about walking into a situation in which Trump may soon explode the case by talking to Mueller.

At its core, that requires a pretty amazing lack of confidence in the man who has been entrusted to lead our country. And the more Trump supporters like Christie feel compelled to come out and say stuff like this publicly, the more scared you will know they are.

Aaron Blake is senior political reporter for The Fix and has also written about politics for the Minneapolis Star Tribune and the Hill newspaper.