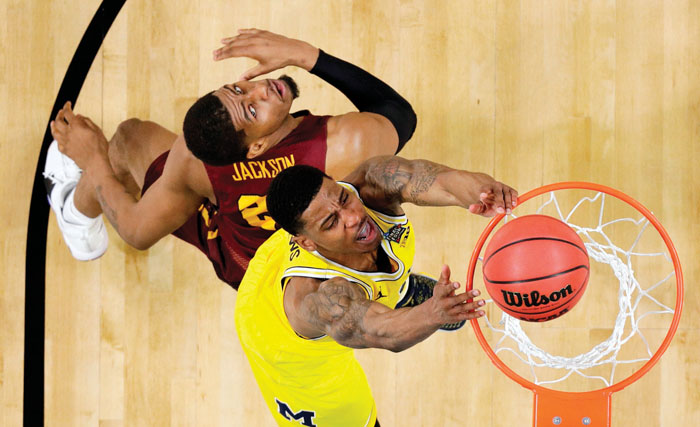 SAN ANTONIO (AP) — Staring down a 10-point, second-half deficit against an underdog that seemed nothing short of blessed during the madness of March, Moe Wagner and Michigan clamped down on Loyola-Chicago and ended one of the most memorable NCAA Tournament runs ever.

Wagner scored 24 points, Charles Matthews added 17 and the Wolverines rallied to beat the Ramblers 69-57 Saturday night in the Final Four.

The third-seeded Wolverines (33-7) will take a 14-game winning streak, the longest in the nation, into their first national championship game appearance since 2013, and second under coach Jon Beilein.

Michigan will play a No. 1 seed, either Villanova or Kansas, for its first NCAA title since 1989 on Monday night at the Alamodome.

Lovable Loyola (32-6), with superfan Sister Jean courtside and their fans behind the bench standing for pretty much the entire game, could not conjure another upset. The Ramblers were the fourth 11th-seeded team to make it this far and like the previous three, the semifinals were the end of the road.

Coach Porter Moser said he was proud of players Ben Richardson, Aundre Jackson and Donte Ingram for holding it together during a postgame news conference, answering questions with red eyes and long faces.

Loyola had no answers for the 6-foot-11 Wagner, and its offense, so smooth and efficient on the way to San Antonio, broke down in the second half and finished with 17 turnovers.

Wagner, playing in front of his parents who made the trip from Germany, had 15 rebounds and was 10 for 16 from the field. Matthews, the Kentucky transfer and Chicago native, had a run-out dunk with 1:33 left that made it 63-53. And that was that.

Wagner became the third player in the last 40 years with a 20 and 15 game in a Final Four game , joining Hakeem Olajuwon of Houston in 1983 (then known as Akeem) and Larry Bird of Indiana State in 1979.

“Wow. If you put it like that, it’s probably cool,” Wagner said. “But to be honest, I kept looking possession by possession. We had trouble scoring the first half. We scored 22 points and that was kind of the only way we found our way to the basket, grab offensive rebounds and get second-shot opportunities.

“And I honestly just tried to do my job.”

Or, as Michigan guard Jaaron Simmon, put it: “He was a beast tonight.”

As the seconds ticked off, Wagner pumped his fist to the many Michigan fans who made the trek to San Antonio, while Loyola’s Jackson, who got the Ramblers rolling with a late game-winning 3 in the first round against Miami, looked toward the roof and shook his head.

“Their length. They close the gap of opportunity really fast,” Moser said.

Custer scored seven straight points for Loyola at one point to put the Ramblers up 41-31 with 14:08 remaining.

“I don’t know if they had magic on their side,” Beilein said. “They’re good.”

Michigan refused to fade, even with point guard Zavier Simpson — whose solid play has been critical to the Wolverines’ late-season surge — playing terribly. Simpson had no points and four turnovers.

Simmons, Simpson’s backup, made a 3 and Duncan Robinson hit another a few minutes later and the deficit was down to 45-42 with 10 minutes left.

Wagner hit a 3 from right in front of the Michigan bench with 6:50 left to tie it, and moments later the Wolverines were back on top, 49-47, when Jordan Poole made two free throws.

Loyola turned it over on three straight possessions and Wagner tipped in a miss by Poole, was fouled and converted the 3-point play to put Michigan up 54-47 with just under five minutes left.

The Ramblers’ 14-game losing streak is over, along with an incredible feel-good story at a time that college basketball, engulfed in a corruption scandal, could truly use one.  Sister Jean Dolores-Schmidt and her favorite team, the Missouri Valley Conference champions, making their first NCAA appearance since 1985, will return to Chicago as heroes, regardless.

“It’s special to see kind of what stage we were able to get to,” said Richardson, a senior who grew up in Kansas with Custer and then convinced his friend to transfer from Iowa State to Loyola. “Despite going out this way, were going to never forget this. I think a lot of people will remember this run for a long time.”

Michigan has more work to do. The Wolverines, unranked to start the season and sitting at 19-7 in early February, will now resume the underdog role they have played much of the season, trying to win their second NCAA championship.

“This team’s had no attention at all,” Beilein said. “Until we went up to beat Michigan State we weren’t nationally ranked. Now we’re playing on Monday night.”