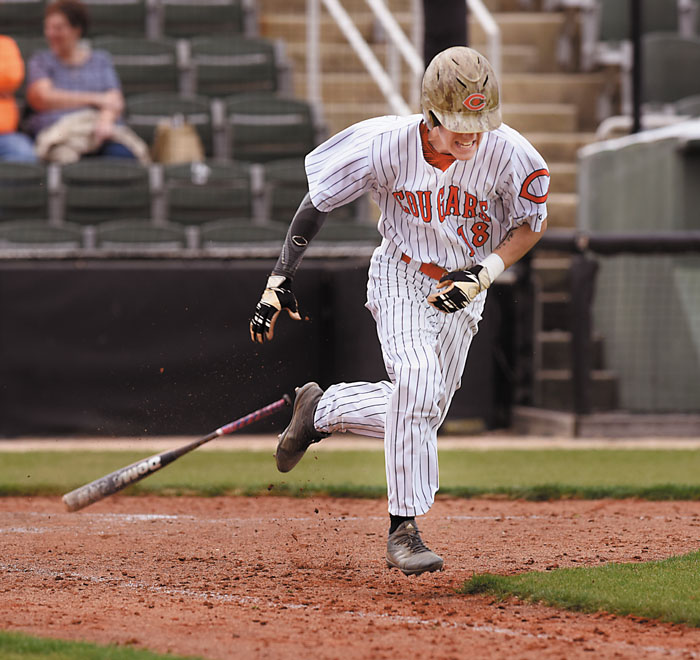 Wayne Hinshaw/for the Salisbury Post Carson’s Brycen Holshouser, shown during Friday’s game against Mount Pleasant, had two hits on Saturday as the Cougars defeated Robinson, 8-6, in the F&M Bank Classic at Intimidators’ Stadium in Kannapolis.

KANNAPOLIS — It was a game the Carson Cougars will try to forget.

The weird thing was that the Cougars won on Saturday in a semifinal game in the F&M Bank High School Classic. They won despite doing all sorts of things that the Cougars just don’t do. Carson handed Robinson 10 walks, five errors and one HBP, but still escaped Intimidators Stadium with an ugly 8-6 victory.

“I was just talking yesterday about how our defense had righted the ship,” Carson coach Chris Cauble said with a weary smile. “I guess I jinxed us.”

Carson’s odd day included three booted grounders by shortstop Owen White, who might be the state’s best player. White may not kick three more the rest of the season. The infield at Intimidators Stadium plays differently than high school fields, although no one, including White and Cauble, looked for excuses.

“Owen stayed backed on some balls that he needed to charge,” Cauble said. “We talked about it. All our mistakes today are correctable.”

The bottom line was Carson’s 10th straight victory. Carson starting pitcher Cameron Prugh was really good and Clayton Gilmore was able to finish it. But the guy who really won this one for the Cougars (11-3) was third baseman Cole Hales.

The boxscore says Hales went 0-for-3. That’s accurate, but he won this one with his glove.

Carson steamrolled through the early innings behind Prugh, building a 7-0 lead. It was Prugh’s first mound start of the season, although he’s pitched very well in a relief role and still hasn’t allowed an earned run.

“We came out and did what we needed to do,” Cauble said.

Robinson scored an unearned run in the fourth to make it 7-1. Prugh had thrown 72 pitches. Cauble knew that was enough.

“He’s had a little soreness, and this was his first start,” Cauble said. “We’re going to need him for the stretch run, so we weren’t going to let him throw too many today.”

With Prugh in the dugout, things got interesting in the fifth. Deacon Wike relieved Prugh. After a single and two walks filled the bases, Cauble made another call to the bullpen. Sophomore lefty Logan Rogers answered this one.

Rogers’ second pitch was absolutely drilled by Robinson cleanup man Marshall Raper, who yanked it hard. It was a laser beam headed toward Hales.

“I was playing in on the grass because we were thinking get a ground ball and get that home-to-first double play,” Hales said. “That line drive in the fifth, I never even saw it. But I heard it. I went down, and the ball was in my glove.”

You can’t teach instincts and you can’t teach luck. Hales had some of both. Robinson still got four runs in that inning. If Hales hadn’t made that snag, the Bulldogs (8-4) might have put together a crazy inning.

“Cole Hales is money at third base,” Cauble said. “He amazes me, and not just today. He’s done that all season.”

Hales has not had a great season with the bat, but he’s made up for it every time he’s taken the field. Sometimes it’s not easy to separate offense and defense, but he’s managed to do it, and Cauble has no doubt that his bat is going to come around. Hales makes contact. If you keep making contact, good things happen eventually.

“I think the best skill I have is defense,” Hales said. “When you make a good play on defense, it picks your confidence up.”

Freshman C.P. Pyle pushed Carson’s lead back to 8-5 with a two-out, run-scoring single in the top of the sixth, but Robinson kept fighting in the bottom half of the inning. The Bulldogs had the bases loaded when Cauble called on Gilmore to put out the fire. Gilmore walked the first man he faced, and it was 8-6. Then Brandon Dayvault scorched a hot grounder that looked like a two-run single when it left the bat.

But Hales gloved it. Then he righted himself and fired an accurate throw across the diamond. He’d saved  more runs.

“That grounder in the sixth, it was hit sharply,” Hales said.

Hales fielded another one for the second out in the seventh. Then Gilmore got what looked like a routine fly ball to short right. He headed for the handshake line, only the ball wasn’t caught. Three Carson fielders converged, and the ball glanced off the glove of Sollie Holshouser, who had replaced Gilmore in right field.

Now Robinson had the tying runs on base and the winning run at the plate, but Gilmore got a routine popup to finally end a long day.

“Robinson has a great-hitting lineup,” Gilmore said. “I just tried to focus and keep throwing strikes because this was not a normal day for us. Usually we play very clean baseball. We know we need to play better than we did.”

Cauble agreed with that assessment.

“We should have put them away, but we didn’t, and Robinson kept battling the way a good team will do,” Cauble said. “Our bullpen didn’t throw enough strikes and when you mix in some errors, that’s a recipe for a big inning, and Robinson had one. But winning the game is what it’s all about, and we still won the game. It’s a win that we’ll learn from.”

Carson plays West Forsyth for the championship on Monday at 6:30 p.m. The Titans beat South Rowan, 13-2.