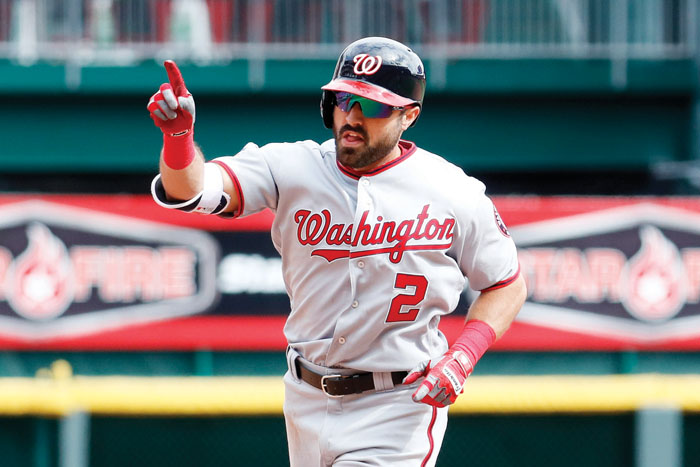 CINCINNATI (AP) — Adam Eaton had solo homer among his career-high five hits and Brian Goodwin hit his first career grand slam on Saturday, powering the Washington Nationals to a 13-7 victory over the Cincinnati Reds.

The Nationals have won their first two games under new manager Dave Martinez, hired after Dusty Baker was fired last season following another quick exit in the playoffs. The last time they opened a season 3-0 was 2013, when they swept the Marlins.

Stephen Strasburg (1-0) gave up three runs — only one earned — in 6 1/3 innings while improving to 5-1 career against Cincinnati. Scott Schebler’s homer in the fourth inning provided Cincinnati’s first run of the season after 12 scoreless innings.

TORONTO (AP) — Yangervis Solarte hit a tiebreaking homer in the eighth inning of Toronto’s first win of the season, and Kevin Pillar added an insurance run by stealing second, third and home.

The Blue Jays bounced back from two straight losses. Tyler Austin homered twice for the Yankees.

Solarte began the eighth with a deep drive to center off Dellin Betances (0-1) for a 4-3 lead.

Pillar hit a one-out single and swiped his way to third. The speedy outfielder then broke for the plate with Gift Ngoepe at bat, and Betances threw wildly to the backstop. It was Toronto’s first straight steal of home since Aaron Hill did it against New York on May 29, 2007.

Gibson (1-0), Pressly and Gabriel Moya combined on a three-hitter to help Minnesota bounce back from an 11-inning, season-opening loss to Baltimore on Thursday.

Pressly worked a perfect seventh and got two outs in the eighth before Jonathan Schoop grounded a single up the middle.

Danny Farquhar (1-0) pitched a scoreless inning for the win. Former Royals reliever Joakim Soria got Whit Merrifield to fly out with runners on first and second for his first save with the White Sox.

Chicago’s rally began when Yoan Moncada hit a towering home run off Brandon Maurer (0-1) to begin the eighth. Avisail Garcia followed with a single, Jose Abreu grounded into a fielder’s choice and Matt Davidson drew a walk before Castillo’s two-run liner to right put the White Sox in front.

Bogaerts hit a solo drive in the second against Andrew Kittredge (0-1), a reliever making his first big league start in the debut of Tampa Bay’s plan to use bullpen days in place of a customary fifth starter.

Porcello (1-0) was charged with one run and six hits in 5 1/3 innings. Craig Kimbrel worked the ninth for his second save.

NEW YORK (AP) — Yoenis Cespedes and Travis d’Arnaud homered, Todd Frazier drove in three runs and the Mets opened at 2-0 for the first time since 2013.

Angels right-hander Matt Shoemaker (1-0) gave up three runs and four hits in 5 2/3 innings. He struck out four and walked four while improving to 5-0 with a 2.38 ERA in his last seven starts against Oakland.

Alonso and Gomes provided the big blows off James Paxton (0-1), who struggled with command and failed to make it out of the fifth inning.

Carlos Carrasco (1-0) pitched into the sixth inning to get the victory. Cody Allen got three outs for his first save.

Seattle’s Ichiro Suzuki robbed Jose Ramirez of a home run leading off the third inning, timing his leap perfectly to reach above the wall in left field. Suzuki also had his first two hits for the Mariners since July 21, 2012, before he was traded to the Yankees.