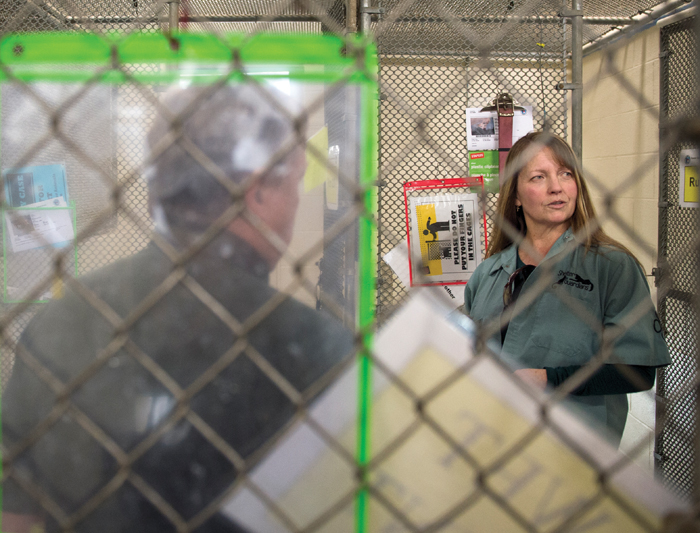 As Nina Dix and Bob Pendergrass stood and looked over the intake room of the Rowan County Animal Shelter last week, they agreed: the shelter is at maximum capacity.

But the referenced capacity isn’t for animals. It’s for storage, for working areas and places for clients to visit with potential, fur-covered family members.

The intake room is located in the shelter’s current dog facility, and the entire building reflects this growing need. Nearly every square inch of available space is filled with items necessary for day-to-day operations: medical supplies, blankets — the list goes on.

Staff are tucked away in an equally cramped fashion. Just past a set of puppy cages, a single room houses the desks and computers of six animal enforcement officers. The group works desk to desk and shoulder to shoulder.

Fortunately, the Shelter Guardians, a local nonprofit that Dix chairs, has identified the solution. It’s the construction of a new dog adoption center valued at $1.8 million.

The proposed 8,000-square-foot facility will have a surgery and spay/neuter room, surgery prep room, large and small dog recovery wards, adoptable dog suites, and four rooms to visit with potential pets in private.

It will also have a “puppy room” for small dogs and puppies, a dog food prep kitchen, a laundry and clean linen room and a professional bathing and grooming room.

Each planned component of the space comes from extensive consultation with shelter staff, said architect Jon Palmer. He also serves on the Guardians’ board.

Dix said she merely approached shelter staff with a question: what could be done to help them better care for the animals?

“I’ve always viewed the animal shelter staff as kind of like telling a man to go cut down a tree and then handing him a fingernail file to do it,” she said. ‘They just didn’t have what they needed to do what we expect them to do with the animals.”

Dix said staff at the shelter refer to the in-the-works building as “Shangri-La” — a utopia in the business of animal rescue.

“It will help us in so many different ways to have a space, to have the right kind of space, to have a facility where they can do surgery a little bit more effectively,” he said,  “although they do a pretty darn good job with it in the space they’ve got now.”

In the new facility, kennels for adoptable dogs will include automatic watering bowls, attached food bowl stations and raised beds for improved animal health and comfort. In total, the new facility will have 46 kennels compared to its current 22.

Step 1 in the project, said Dix, is securing the money for the project.

Shelter improvements have been a focus of county officials for years, and the improvements show: vaccinations, an on-site veterinarian, microchipping and more have helped the facility drastically reduce its euthanasia rates for dogs.

In 2010, over 99 percent of dogs taken into the shelter were euthanized. That number has plummeted dramatically each year, reaching just over 2 percent in 2017.

But the county is in no place to foot the bill on an expensive expansion, said Pendergrass and Dix.

“We’re very lucky to have the energy and enthusiasm of people pushing this project along along,” said Pendergrass. “Even though the county would like to do this, the county budget has to do so many different things for public safety.”

Therein, the Shelter Guardians are tasked with generating the funds and seeing to the construction.

“We looked at it as if the people that care about animals want a better shelter, then they’re going to have to build it,” said Dix.

According to Dix, the group is making strides toward this goal, but they aren’t there yet. Some $740,000 is committed or pledged to the project.

Another chunk of funding is in the works in the form of a challenge grant. A group of anonymous donors, calling themselves the “Friends of Bill Stanback,” have agreed to match donations for the project up to $125,000.

Stanback was a supporter of the expansion before his passing in February this year. His wife, Nancy Stanback, serves on the Shelter Guardians board.

“He just liked the idea,” said Nancy Stanback. “He, as I do, loved animals and hated the fact that we have to put some down. He thought this project was a good idea and something that was needed and he wanted to support that.”

Dix said this gives the shelter better control over its needs and wants. If the county contributed monetarily, it would have to bid out the project to designers who might not work so closely with shelter workers, she said.

Instead, the county will supply the property for the new dog adoption center. It will be located at the site of the recycling center off Julian Road, which will be moving, said Commissioner Craig Pierce.

“The biggest thing that we talked about as we planned this was not only the final product, the completion of the adoption center,” he said. “I wanted to make sure it was maintenance-free, that it was not something we had to spend taxpayer dollars on to upkeep.”

He said he was pleased with the planning and foresight that’s gone into the project’s planning. The new building will have a split-stone face, masonry that requires little to no maintenance. It will also have a steel roof, concrete interior walls and epoxy-coated walls and floors.

“This is another wonderful example of a public-private partnership,” said Commissioner Judy Klusman, “It’s something that the current commission is very supportive of. It makes taxpayer dollars go further.”

Both Pendergrass and Dix said the benefits of the new dog adoption center move beyond square feet and storage space. The new building will make for healthier and happier animals, a safer work environment for volunteers and a more welcoming space for those looking to adopt.

Two years ago, the county invested $130,000 to refinish the shelter’s floor with an antimicrobial finish that helps with both odors and disease control.

Other potential disease hazards remain in the kennels, said Pendergrass. The paint on their cinderblock walls is easily scratched away by housed animals, he said, and each scratch is a place where bacteria can fester.

Office spaces, grooming, laundry, and surgery areas separate one side of the kennels from the other, helping reduce noise and anxiety for dogs. Currently, dog kennels are separated by a few feet of hallway.

Moreover, a fence is the only separation between dogs being held for potential rabies from the general population of animals. With the new construction, both quarantined dogs and those being held for court cases will remain in the old building, creating a safer demarcation for shelter volunteers and visiting clients.

Finally, the increased space will provide potential-adopters a less overwhelming adoption experience. Not only will the kennels be quieter, there will also be four ‘take me home’ adoption rooms where the public can visit one-on-one with potential pets.

“I think it will make our ability to adopt animals out to the public a lot better,” said Pendergrass. “… If we have a nice facility that people can come in, they can see the animals looking calmer and acting calmer.  Then, they’ll have time to take an animal off to a quiet spot by themselves, to spend time with that animal and make decisions.”

Both Klusman and Pierce praised the project and said that it spoke to the strengths of the Rowan County community at large. It paints a positive picture of the county, Pierce said.

Rowan is made up of generous citizens that are working hard to improve the lives of their pet populations, said both.

“This is just one more thing to help us become the best shelter in the state,” said Pierce. “That’s our ultimate goal.”

Designate donations to the Friends of Bill Stanback Fund to have them matched dollar-per-dollar.