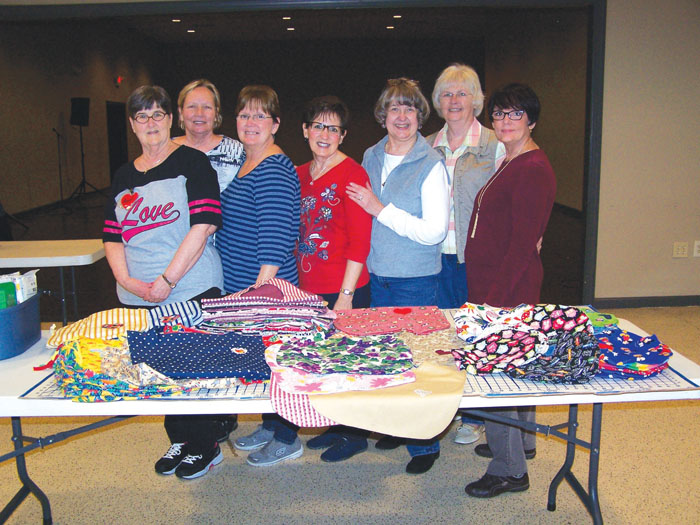 By Ann C. Wayne
Suzanne Hege has been sewing for over 50 years. It is simply her passion. She has created costumes for churches and schools and has made shirts for racing teams. She has also sewn for many people in the community. Suzanne has sewn American flag toss pillows for Veterans in Hospice and hopes to make these same pillows for the Veterans at the VA Hospital in Salisbury.

But recently, Suzanne had a vision to start sewing for non-profits and giving back to organizations in the community. At first, she thought she was supposed to work on these projects alone. But God had different plans. She said, “He planted a bigger picture in my heart to allow people from local churches to work together on projects reaching out to the community to make a difference.”

She came up with the name “Loving Hearts Sewing Circle.” Her idea was to get ladies — or men — from area churches to meet and work on projects such as adult bibs for nursing homes, tote bags for children to put their clothes in when they are taken out of their homes for protection or other reasons, or surgery hats for children at local hospitals.

One of the group’s largest projects this past year was sewing more than 400 Christmas stockings for Elder Orphan Care, a non-profit that reaches out to elderly orphans in Romania and now in the United States.

All projects have one thing in common. Each one is adorned with a heart. It can be appliqued, painted on or screen printed. That’s the only requirement for the donated projects. Suzanne said, “I can’t believe that some organizations are so hesitant. They simply can’t believe that our sewing group is actually giving the products to them free of charge. Some people think that you want something from them in exchange for the sewing items.”

Suzanne hopes that more people become involved from local churches. “It’s not necessary to have sewing skills to be a part of the group. You can cut and press too.” The group is currently rotating monthly at Crossroads Church in Concord, West Cabarrus in Concord, and He’s Alive Church in Kannapolis. She said that their biggest need right now is to find a permanent place to meet so they can leave some of their equipment and supplies on-site.

One of the group’s participants is Patti Wesley from Crossroads Church. She has 55 years of experience under her belt. Patti said, “My ancestors were seamstresses. My mother made all of my clothes.” Her mother also made costumes and aprons for their church. Patti, too, is involved in other mission work. She was over 65 when she served on her first mission trip to the Navajo in Arizona. She made four trips there and then decided to go to Romania with Elder Orphan Care. She has been going with them for the past five years. Ask her why she is involved in mission work and she will say, “It’s a calling.” Patti also serves meals at the Salvation Army in Concord and sells hand-crafted items in the “Mission Marketplace” at her home church. Profits from this go towards her mission trips.

Kathy Moshman, another Crossroads member, is also involved with the group. She said, “When I was in high school, it was mandatory to take Home Economics to learn how to sew and cook.” When she was a young girl, her father was in the military. “People gave our family food and clothing in a time of need. I enjoy giving back to people.” Kathy currently donates to the “Backpack Buddies” program at Crossroads — backpacks are filled with food for needy children each week and delivered to area schools. She also helps sew the blankets for new babies and “Memory Blankets” for parents who have lost a child through miscarriage or whose child was stillborn. Christmas stockings for Elder Orphan Care and lap blankets or hats during the holidays are some of the other projects that she helps with. Kathy has learned to quilt, crochet and knit through another sewing group at Crossroads.

Another seamstress, Ellen Rufty from West Cabarrus Church, says that “Participating in mission work is a calling. You find your spot to bless others.” She said, “I’m all in!” She and Suzanne were high school friends and have worked on many sewing projects together. Ellen has been sewing for over 20 years and is involved in other local mission work. She prays over the projects that she is working on and for the people who will receive them. Ellen will be helping with “Operation In As Much” at West Cabarrus Church on Saturday, April 28 beginning at 9 a.m. Members will be assisting neighbors with yard work and other household projects. A group will be working on sewing projects and then distributing them at the end of the day.

A participant from He’s Alive Church, Prudence Robinson, says that “It is great meeting women from other churches. This just makes my week better.” She feels called to use the gifts that God has given her. Prudence has helped Suzanne with costumes at Crossroads, the Christmas stockings with Elder Orphan Care and has sewn bears for Victory Junction — a camp for kids with disabilities in honor of Kyle Petty’s son Adam. The bears are created out of black and white checkered flag fabric. Prudence is also a member of Cabarrus Quilters.

“Loving Hearts Sewing Circle” is definitely a calling to mission work locally and internationally. All of these women are serving selflessly because they are passionate about all of the projects and reaching out to others. The sewing group is advertised through Facebook, by word-of-mouth and in church bulletins.

If your church is interested in being a part of this group, contact Suzanne Hege at szhege@aol.com or message her on Facebook. She is also willing for teens to help with the projects so that they can learn how to sew and work on mission projects. “Loving Hearts Sewing Circle” will accept fabric donations or notions too. Contact Suzanne if you would like to bless this ministry.