Guest column: A la Nixon to China, only Bolton can go to North Korea 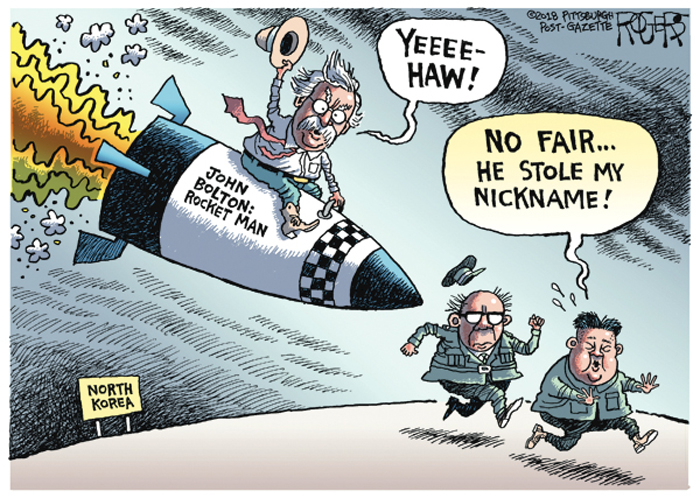 There is no doubt that John Bolton deserves his fair share of criticism. But Democrats and their allies in the media appear to be going off the rails. Some of their criticism of the national security adviser-designate is forced at best.

Bolton is an accomplished diplomat. Despite his outwardly hawkish rhetoric, Bolton has experience that will serve this administration well. Specifically, when it comes to North Korea, perhaps Bolton is a man who has met his moment.

Either by design or completely reckless careening, President Donald Trump is barreling toward a summit with North Korean leader Kim Jong Un. The Trump-Un meeting will be consequential regardless of the outcome. No one would trust Trump to go in it alone with Kim.

So, a la “only Nixon could go to China,” maybe only Bolton can go to North Korea. Remember, there has been no more persistent critic and aggressive opponent of the North Korean regime than Bolton. The North Koreans know it, and that might make a difference.

Republicans would have never accepted a deal made by President Barack Obama, but by Bolton? I think Sen. Lindsey Graham, R-S.C., spoke for most Republicans when he said last week that “the North Koreans know, without a doubt, that John Bolton sees their nuclear program as a threat to the United States and will strongly advise the president to use military force if he has to, which means it’s less likely we will.”

Still, there are some credible voices that are alarmed about how much influence Bolton will soon have. As the astute Susan B. Glasser wrote: “Bolton is … personally belligerent and professionally bellicose, and soon to be the closest adviser to an inexperienced president on how to handle all the world’s challenges.”

With that said, if Bolton signs off on a deal with North Korea, it will say something to even his fiercest critics who know him as someone with a hard edge, with a bias for ballistics and who never takes the dovish way out.

Because Democrats have no affirmative agenda to run on in November, they are left clinging onto the Russian collusion story for dear life — even when it comes to Bolton. Democrats such as Sen. Tim Kaine of Virginia have gone so far as to suggest that perhaps Bolton shouldn’t receive a security clearance because he has interacted with Russians over the years.

Well, most foreign policy professionals in the United States make it their business to interact with Russians on a routine basis. And oh by the way, it was the candidate who picked Kaine as her running mate (remember Clinton-Kaine?) whose allies actually used Russian-supplied information.

Anyway, Kaine is irrelevant. Democrats have no evidence of any wrongdoing on the part of Bolton. But that won’t stop them from making a lot of noise. Democrats and their allies in the media are never going to make Bolton’s job any easier.

Bolton is not new to Washington. He isn’t the frothing crazy person his enemies want him to be. In fact, he performed admirably at the highest ranks of government for years.

Bolton’s experience and even his persona will help provide order in an otherwise turbulent administration. He has a track record of proving his critics wrong. Bolton might not stop the president from tweeting, but maybe he can stop Kim from launching a nuclear warhead. Ironic that the latter may prove easier.