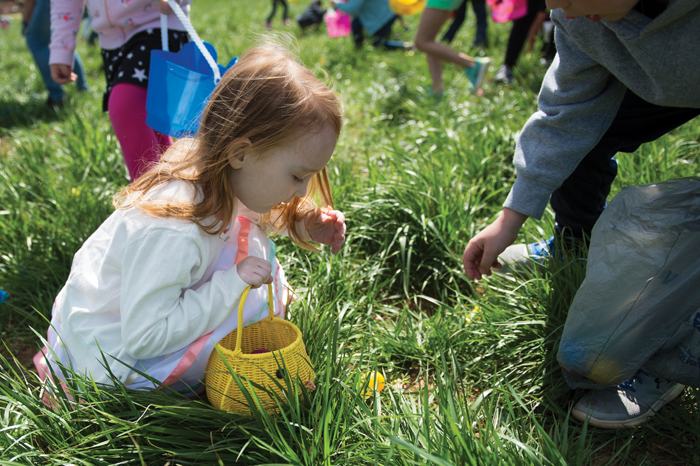 Sophia Correck, 4, squats down to pick up an egg at the 9th Annual Easter Eggstravaganza at Lazy 5 Ranch on March 31, 2018. (Photo by Rebecca Benson)

MOUNT ULLA — Before petting the bunnies at Lazy 5 Ranch’s Easter Egg-stravaganza, 7-year-old Malachi Robinson had one question for his mother: “Can we keep the bunnies?”

“No, we can’t keep them,” said his mother, Ashley Young.

Malachi also attended the daylong event with his father, Bruce Robinson, and brother, Josiah Young, 8. It was actually Bruce’s idea to take the family out for the day and Ashley also had the day off.

“It’s my first time. I learned about it on Facebook. He’s been having a ball,” Robinson said.

He said he was surprised that his son actually wanted to pet the animals, because he wasn’t fond of them.

The biggest draw for the event was the Easter eggs that were dropped from a helicopter onto a field. The children were divided by age and after the plastic eggs hit the ground, children ran in wildly to get their hands on the coveted six colored eggs. They only needed six to claim a prize.

Robinson said the helicopter drop was why he wanted the children to attend the event.

“I never heard of anything like this,” he said.

“It was more than I expected,” Robinson said. “It’s a real nice getaway.”

The family lives in Salisbury, just a short drive from Lazy 5 Ranch.

Young said the children had been to Lazy 5 Ranch for other activities, but it was the first time they ever attended the Easter event.

“Now, let’s go get something to eat,” Malachi declared after seeing the bunnies.

The event is a family tradition for Michelle Correck and her 4-year-old daughter, Sophia.

Sophia had a pretty pastel colored Easter dress and shoes for the event to which Correck said she didn’t care if her daughter got dirty, she just wanted her to have fun. The family drove from Huntersville for the event, which they’ve attended for the last four years.

When she first searched online for an Easter event what caught her eye was that the event included a helicopter drop.

She said they spent half an hour just petting the bunnies and she expected at some point they would go for a hayride.

“It’s always the bunnies first,” Correck said with a laugh.

Azareli Benitez of Mocksville attended the event with her children and the rest of her extended family. She spotted the event listing on Facebook and it was the family’s first time attending.

Mike Phillips and his wife brought their grandchildren — Morgan, 9, and Stephen, 7, to the event. It was their first time attending the Easter event. The family traveled from Charlotte and planned to participate in all of the offered activities.

Phillips said he heard about the event from his wife’s nephew, whose family had attended in the past. Phillips said the grandchildren spend a couple weekends out of the month with him and his wife. He actually had the day off and so they made the trip.

As to what activity the children stopped at first, Phillips said, “they went right for the bunnies.”

Britney Timmons of Mecklenburg County said she and her family have attended two other times and wanted to return with her sister as well as her nieces and nephews.

“It’s awesome. I had a great time seeing all the smiles on their faces,” Timmons said.

In the past, the event has taken place over the course of two weekends, but the threat of impending bad weather last weekend made organizers cancel it. So this weekend the ranch expected more people.

There were about 130 staff and more volunteers who helped with Saturday’s event, said staffer Sarah Beth Rogers.

She said altogether they will have had 14 drops of Easter eggs from the helicopter. A Lazy 5 Ranch employee boards the helicopter with the pilot and lets the plastic eggs go once they are over the roped-off field. Each child received six eggs that were traded in for prizes.

The event also featured a corn box pit for the kids to dive into and play around in as well as a coloring contest. In addition, children and adults got to guess how many jelly beans filled a jar.

The event also included a scavenger hunt in the petting zoo.