Editorial: A day, a season for hope and salvation 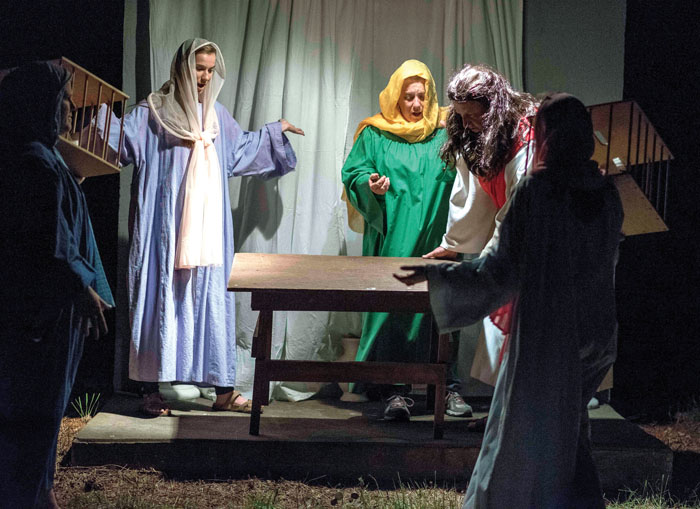 Dale Martin, who plays Jesus, turns over the tables of the money changers in the temple in one of the scenes from 'Christ's Cross and Crown' at Ebenezar Lutheran Church in China Grove. Jon C. Lakey/Salisbury Post

Over the past 56 years, the congregation at Ebenezer Lutheran Church has presented the outdoor drama “Christ’s Cross and Crown” well over 100 times.

It’s a beautifully done, almost epic production that seems to involve the whole congregation and participants from elsewhere. The drama’s showings draw hundreds of visitors. They watch from a grassy hillside on blankets and lawn chairs as the events of Jesus Christ’s last week on earth unfold below them, in Scripture-based narration and sound effects with pantomimed scenes.

But the most important of these are hope and salvation. Easter and the season in which it is celebrated offer us a new beginning, the idea that out of great suffering can emerge life everlasting.

Vanessa DuMont, who has directed the presentations for many years, says just to hear the audio sounds of the crowd shouting “Crucify him, crucify him” becomes emotional enough for her.

Dale Martin, the man who has played Jesus in this production for more than two decades, says it is simply an honor to be in the role of Christ, one of the most important men in history.

Earlier this week, Post contributor Susan Shinn Turner recounted her recent visit to the “Why Christian?” conference held at Duke Chapel. Participants were asked, “Why are you a Christian,” and, of course, the answers varied widely.

One of the speakers touched on the sentiment that maybe Martin feels in his role as Christ.

“It matters that Jesus was fully human,” said Donna Coletrane Battle, chaplain at Meredith College. “Jesus lived in the margins. In his Crucifixion, his body was under attack simply because of who he was, and his pain was not dulled. I saw a savior willing to stand in solidarity with me.”

The Rev. Nadia Bolz-Weber, a Lutheran pastor and founder of the popular conference, said, “I’m a Christian because Jesus is unafraid to touch lepers, to reach into tombs we make our homes. He was merciful to the demons. — that’s super disturbing to me. But to be honest, that is exactly the kind of savior I need.”

Not everybody is Christian. Not everybody celebrates Easter. But the story of Christ provides lessons for all mankind and reasons to celebrate today, Easter 2018, with the notion that we all have the capacity to be greater people and stand in solidarity with one another.