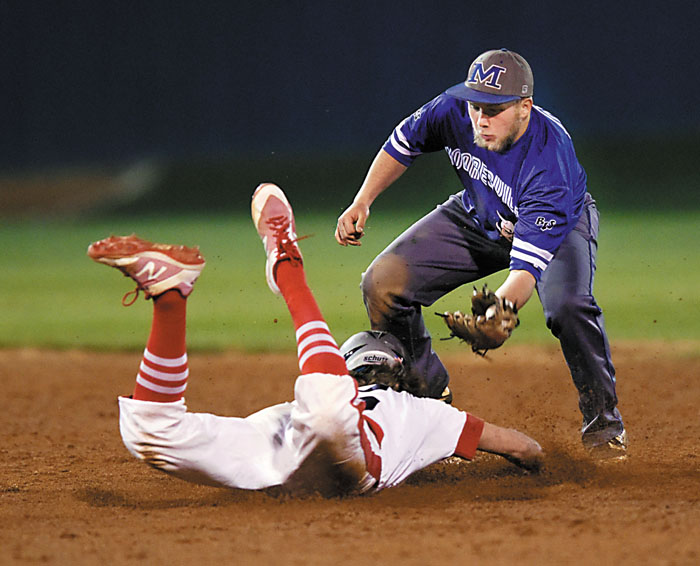 Seven of the Mustangs’ nine hits went for extra bases in an 8-5 victory over Mooresville at Staton Field, site of the East Rowan Spring Break Tournament.

“In the fall and winter, we were in the weight room about three times a week,” senior Corbin Moss said, after East (8-4) advanced to Monday’s 4 p.m. semifinal against Central Cabarrus. “That’s where it all starts for us.”

Moss led the way against Mooresville (6-8). He went 3-for-4 with a towering, three-run homer to right field in the top of the first inning and a blistering, two-base hit in the fourth. Teammate Wayne Mize clobbered his third home run — a two-run shot that cleared the 343 sign in right-center in the fifth. And winning pitcher Jake Hunter, Bryson Wagner and Matthew Mathis each produced run-scoring doubles. East’s final extra-base hit was Will Brown’s one-out triple in the sixth.

“I thought it was a big game,” winning coach Brian Hightower said, after East prevailed for the third time in its last four outings. “We made the bracket and knew Mooresville would be a tough team to play, so we wanted to face them. They’re a quality team, so I think it’s a good win for us.”

Mooresville suffered its third straight loss, but had the tying run at the plate when Justin Poris bounced out to end the game. The Blue Devils used Blake Burchett’s RBI-single and a pair of East errors to score twice in the last of the seventh.

“We had a few opportunities. We just didn’t make enough out of them,” said Mooresville coach Jeff Burchett. “It seemed like we didn’t have the drive tonight, didn’t have the energy. We were a little flat.”

East wasn’t. The Mustangs jumped on junior right-hander Jackson Reid for four runs in the top of the first. Hayden Setzer opened the game with a sharp, ground-ball single to right-center and stole second base. He opened the scoring when Hunter whipped a two-out double to the gap in left-center.

“Their pitcher was very tall, so I was expecting something low in the zone,” Hunter said. “I expected to get on top of it and just hit it hard in the hole.”

With two runners in scoring position, Moss stepped in and crunched a 1-1 pitch over the fence in right.

“It was a middle-in fastball,” Moss said. “I saw it all the way and turned on it. It felt good because I’ve been in kind of a slump lately. My hands haven’t been working well and I’m swinging too big. That time I took a short, compact swing.”

The blast gave Hunter a comfortable, four-run lead before he threw a pitch. The freshman right-hander gave one run back in the last of the first, when he surrendered a hit, a walk, a double-steal and an infield groundout.

“Four-nothing gets you relaxed, but you still have to focus and make good pitches,” Hunter said, after yielding two earned runs and seven hits in five-plus innings. “A game like this can get away from you real quick.”

Mooresville certainly tried to make that happen. The Devils opened the bottom of the third with Quin Ferguson’s base hit that skipped past Setzer in center-field for a two-base error. Cam Clonch’s sac fly made it 4-2.

East returned fire in the fourth inning, when Reid ran into double trouble. His first start of the season ended after he yielded successive two-baggers to Moss, Wagner and Mathis. “I thought their starter was a little bit wild, but we were able to get some good pitches to hit,” Hightower said.

The last of them was delivered by reliever Logan Witherspoon to Mize, East’s muscular designated hitter. The sophomore drove a 1-1, fifth-inning fastball over the fence for an 8-2 lead.

“Mize really smoked it,” said Moss. “I had just told him to stay back and hit it the opposite way. He’s one of the strongest sophomores I’ve ever played with.”

NOTES: East lost a pre-game coin toss and was designated the visiting team. … Hunter, who indicated his velocity was down, induced eight groundouts. … The Mustangs have hit 12 home runs in 12 games. … Moss, 8-for-40 in East’s first 11, bolstered his batting average by 50 points. Mize leads the team with 12 RBIs and Setzer (.442) swiped his third and fourth basses of the season. … Central Cabarrus (8-4) advanced with a 12-1 first-round win against West Iredell. The Vikings have won five of their last six decisions.