David Freeze: A long day ends with an intriguing story 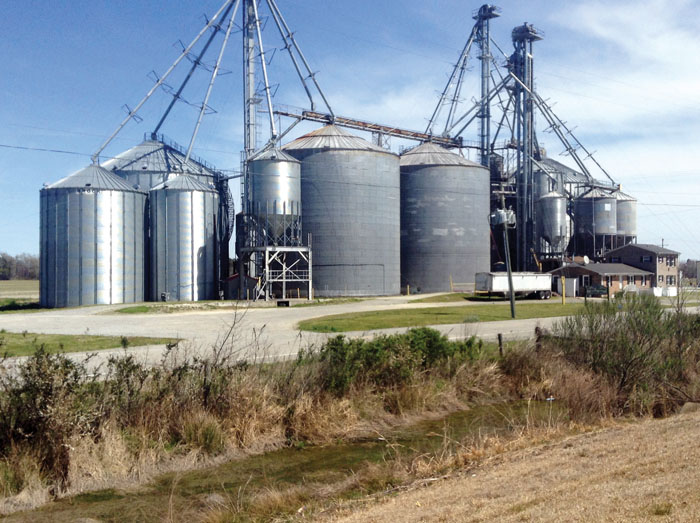 Freeze saw a lot of flat farmland today. This was a large grain elevator that would rival those in Kansas.

My restful late afternoon and night ended early this morning in Plymouth as I started toward Columbia in the dark. Just before leaving town, I made sure to stop and get batteries, some snacks and water. I noticed one convenience store doing a bang-up business while the others didn’t look busy. That store seemed to be a local breakfast gathering place and the clerk was very busy. I couldn’t find the batteries and asked her. She got them off the shelf where I had missed them and was very pleasant. I later realized that she slipped an Easter chocolate into the bag and a copy of John 3:16. Very cool and a good way to start the day!

On the road out of town, I had curbing for four miles at the edge of the pavement. Curbing is even worse than rumble strips because it’s a lot harder to jump with the baby jogger if needed. Traffic wasn’t thick enough to be an issue today. Curbing is an asset in finding change. Most of the 95 cents found today came quickly.

Just past the curbing, the rumble strips returned but traffic remained so light that I easily used the road. Scenery was very thin in this farming area. The only highlights were a huge grain elevator and plenty of large farm equipment spreading lime and fertilizer.

Once I made it to the outskirts of Columbia, finding the Dalton House Motel was easy after 32 miles for the day. A convenience store with a food grill was nearby but about to close. I went inside and had the highlight of the day. Ariel Basnight was working the counter and making food, so I ordered some things and began to pick out some more. Buddy Davenport was also in the store and two more locals came in. By now, they all knew what I was doing and that I was crossing the wildlife refuge tomorrow. One of the men told me that I had better be watchful of the bears and alligators. Right away, the conversation got around to a local woman named Kay Grayson who was called the Bear Lady. She lived in a ramshackle trailer in the wilderness supposedly with bears and enjoyed feeding them and the alligators. Until she was found dead, possibly done in by the bears that she fed for 28 years. The locals don’t think the bears did it. There is plenty of information online about Grayson and her demise. For sure, I will hustle through that area tomorrow.

With little to do but keep eating up the miles and battling a headwind, I listened to various radio stations and kept thinking about how to approach Sunday’s finale. Or if it should be the finale at all. The option of stopping in Manteo or continuing on through to the Atlantic Ocean seemed simple to me. It is just 4-5 miles farther to get the whole job done. I had called the historic Sea Foam Motel about getting an oceanfront room for a night or two. Chris from the motel called back and gave me a very special deal, so the challenge is set. I must make 41 miles tomorrow before dark and will give it my best effort. Once that 41-mile journey is complete, I will have crossed North Carolina from the Tennessee line to the Atlantic Ocean. The endpoint should be Jenette’s Pier and the Sea Foam is very near the pier. Photos will follow at some point depending on who is around. Dipping the front tire on the baby jogger will be a new experience!

Another big issue for tomorrow is that there are no supply points past Columbia. The store near the motel won’t be open, so I hope at least one near U.S. 64 is. My snack supply is low.

So with that, there is plenty of intrigue for the last segment of the adventure. The wildlife refuge with its bears and alligators, finding food and water and covering the 41 miles. Have a wonderful Easter Sunday and join me on Monday to get the final results!