Brunch with the Easter bunny at Patterson Farm 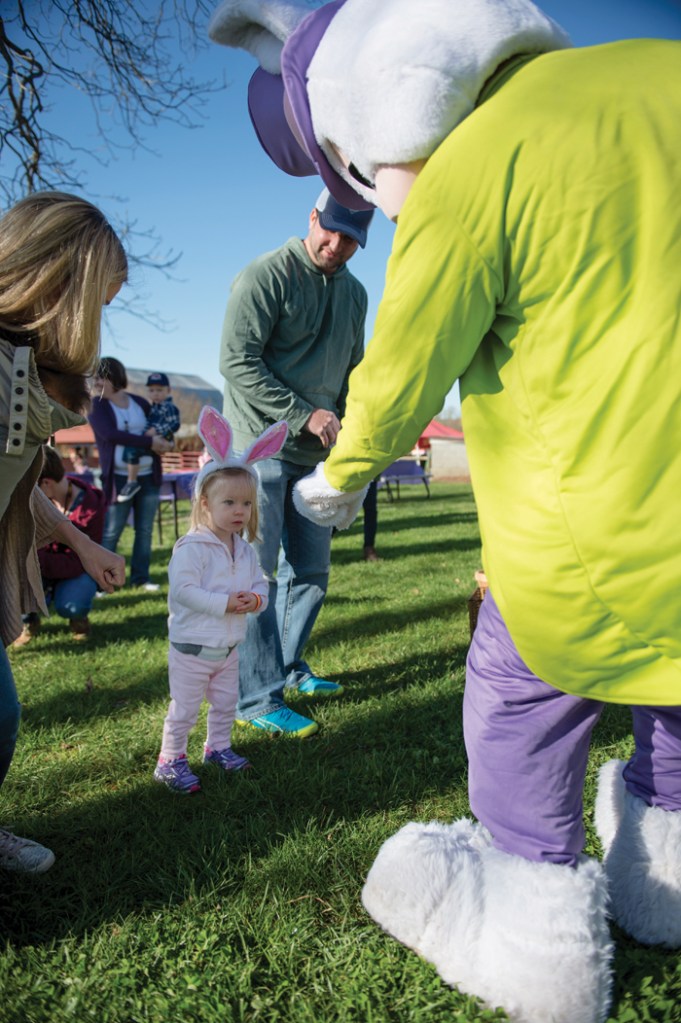 MOUNT ULLA — Eva Marie Barnhardt teetered in the grass as the morning sun highlighted several Easter themed activities held at Patterson Farm’s Easter on the Farm event. The 22-month-old posed for pictures wearing a white bonnet with her initials stitched in pink. Her mother, Ashley Barnhardt and grandmother, Nancy Blair, heard about the event and decided to make the drive from Mount Pleasant.

“I’ve never been here. We were having a mother-daughter-grandmother day. We were both discussing that next year I would love to have all seven of my grandchildren here,” Blair said.

Blair said they were enjoying themselves so much she planned to make it an annual family Easter weekend tradition.

Carla Graham of Mooresville saw the event online and thought it would be perfect for her friend, Ashley Thompson, and her 2-year-old son, Danny. Graham said her family, including her grandchildren, live out of state and she was feeling a little nostalgic for Easter activities and wanted something to do.

“It’s very good. They have a lot of activities for them to do,” she said of the children.

Over 300 people pre-registered for the Brunch with the Easter Bunny event and the Egg-cellent Adventure portion of the day’s activities, said Michelle Patterson, of Patterson Farm. The brunch was provided by the Millbridge Ruritans, who were raising funds for a fundraiser, much of which will go toward scholarships. The other activities were held all day.

This year marks the second year for the brunch, Patterson said. On Friday, the farm hosted an egg hunt for children with special needs. Farm staff created a place for the children to have easier access to the eggs, which included using velcro to stick the plastic eggs to walls.

Each child received a key sheet that included a number of colored eggs they were tasked to find. The eggs were scattered in a grassy area and once they found the eggs they could deposit them into the exchange drop. The children each placed their colored plastic egg into the corresponding colored chute. Each egg landed into a colored bucket. Once the children returned all of their eggs they received a treat bag and a special prize worth free ice cream or free attendance at a future event.

She attended with her three boys — Grayson, 1, Lucas, 7, and Andrew, 12, along with some friends and her children. It was the first time the family had ever attended the Easter event, but they’ve been to Patterson Farm before.

“We’ve been coming for years. We usually come for the fall festival and pre-K field trips,” Thompson said.

She said this event is sort of a kickoff for their Easter holiday.

“I thought it would be fun to get out and have a little brunch,” she said.

She was surprised her 1-year-old did so well with the Easter bunny.

Christie and Brian Ickler heard about the activities via Facebook and decided to drive from Iredell County. The Rowan County business owners brought their son, Brayden, 2.

“It’s awesome. We came out in the fall for the pumpkin patch,” she said.

Meghan Patton of Statesville is a special needs teacher and often attends events at Patterson Farm with her students. She and her daughters, Caryss, 7, and Riley, 4, were at the farm on Saturday to participate in all of the activities. Patton said she learned last year that her children cared more about getting to play than having brunch so this year they skipped the brunch and went straight for all of the activities.

The two girls were so excited at the mention of getting their faces painted. They squealed and jumped up and down once the artist revealed their airbrushed designs.