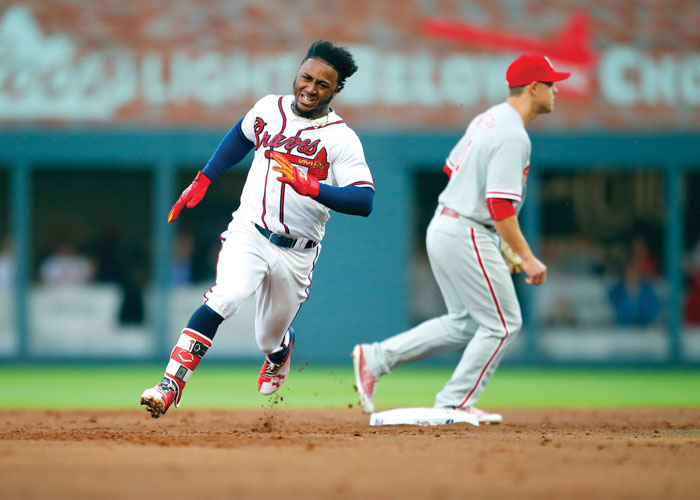 Atlanta Braves' Ozhaino Albies rounds second for a triple in the first inning of a baseball game against the Philadelphia Phillies, Saturday, March 31, 2018, in Atlanta. (AP Photo/Todd Kirkland)

ATLANTA (AP) — Ender Inciarte drove in four runs with three hits, Ryan Flaherty had four hits and scored four times, and the Atlanta Braves roughed up Vince Velasquez and the Philadelphia Phillies for a 15-2 win on Saturday night.

Velasquez (0-1) faltered in a tough spot for Philadelphia after it used a combined 13 relievers in the first two games of the series. He was charged with seven runs, four earned, and nine hits in 2 2/3 innings.

The Braves led 3-2 before scoring four runs in the fourth. One out after a bloop single by Nick Markakis drove in two runs, manager Gabe Kapler came to the mound to replace Velasquez. Left-hander Hoby Milner, the only reliever up in the bullpen, apparently wasn’t ready to enter the game.

Kapler remained on the mound as Milner took extra throws before leaving the bullpen. Braves manager Brian Snitker came out of the dugout, apparently to argue about the delay, and was ejected by umpire Jerry Layne, the crew chief.

Visibly upset, Snitker had more words for plate umpire Vic Carapazza on his way off the field. It was Snitker’s second ejection of the series.

Milner, pitching for the third straight game, recorded only one out.

Phillies: RHP Tommy Hunter (strained hamstring), who opened the season on the 10-day disabled list, is expected to report to Class A Clearwater next week. RHP Jake Arrieta, who signed a three-year, $75 million contract on March 12, also will report to Clearwater to prepare for his first scheduled start with the Phillies on April 8.

Braves: C Kurt Suzuki suffered what he said was “really bad” bruising when he was hit by a pitch on the side of his right hand on Friday night. The hand was still swollen on Saturday but he said he hopes to play Monday or Tuesday. C Tyler Flowers was placed on the 10-day DL on Friday with a strained left oblique and could miss one month.

Right-hander Josh Ravin, who appeared in a combined 33 games the last three seasons with the Dodgers, was recalled by the Braves and pitched the ninth, giving up only a walk. Left-hander Rex Brothers was optioned to Triple-A Gwinnett. Right-hander Akeel Morris was designated for assignment.

Phillies: RHP Ben Lively will face New York’s Matt Harvey when Philadelphia opens a series at the Mets on Monday night. Lively was 2-1 with a 2.33 ERA in three starts against the Mets in 2017.

Braves: After a rare Sunday off day, the Braves open a home series against Washington on Monday night when LHP Sean Newcomb makes his first start of the season.