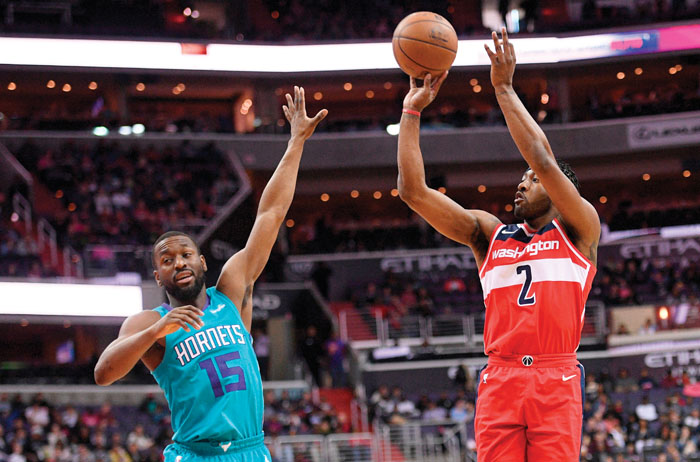 WASHINGTON (AP) — Washington coach Scott Brooks was excited to have his “Ferrari” back. Now the Wizards will ride into the playoffs at full strength.

All-star John Wall had 15 points and 14 assists in his first game in two months, Otto Porter Jr. had 26 points and 11 rebounds, and the Wizards beat the Charlotte Hornets 107-93 on Saturday to clinch their fourth playoff berth in five seasons.

“That Ferrari is pretty good,” Brooks said referring to Wall. “He got a lot of open shots for a lot of players. That’s what he does at the highest level in the league.”

Wall, who last played on Jan. 25 and had left knee surgery six days later, made his first shot of the game — a 3-pointer from the top of the key — and played 33 minutes.

“It was good to see my first shot go in,” Wall said.

Bradley Beal scored 22 points and hit 6 of 8 3-pointers as the Wizards tied a franchise high with 18 made shots from deep. Washington beat Charlotte for the first time in four tries this season.

The Wizards went 15-12 without Wall, but had lost four of five to slip into sixth place in the Eastern Conference, just a half-game ahead of both Miami and Milwaukee entering Saturday.

“We don’t know who we play and we really don’t care who we play. We just want to play well going into the playoffs,” Brooks said.

The Wizards would currently match up with LeBron James and third-place Cleveland.

Dwight Howard had 22 points and 13 rebounds for the Hornets, who have now lost two straight after winning four in a row. Kemba Walker finished with seven points, just the fourth time this season the All-Star failed to reach double figures.

“I just think turnovers killed us,” Howard said as Charlotte had 17 turnovers compared to 11 for Washington. “I want to say so much that it was John Wall coming back, but I think it was just turnovers.”

Nine different Wizards — including Wall — had at least one steal.

“Their defense is aggressive,” Hornets coach Steve Clifford said. “That was the difference in the game.”

Trailing 51-50 at the half, Washington outscored the Hornets 37-23 in the third quarter and never looked back. Bradley Beal scored 14 points in the third, while Mike Scott had 11 of his 15 points in the quarter.

Wall had five assists and the Wizards assisted on 12 of 14 shots in the third.

Asked afterwards if he was in pain after playing for the first time in two months, Wall responded: “I’m cool.”

Brooks said Wall would not play Sunday in Chicago, avoiding a back-to-back so early in his return.

Charlotte reserve guard Jeremy Lamb missed his second game of the season with left foot soreness. Lamb, who leads the Hornets bench with 13.1 points per game, had averaged 17.6 points in the previous three meetings with Washington, including 24 on Nov. 22.

Hornets: Howard had his 48th double-double of the season. … Walker picked up a technical foul in the fourth quarter. … Treveon Graham’s 0-for-2 trip to the foul line in the middle of the fourth quarter earned all in attendance a free fast food chicken sandwich.

Wizards: Markieff Morris had three points and three rebounds in nine first-quarter minutes but was then ruled out with flu-like symptoms. … Kelly Oubre Jr.’s 3-pointer in the fourth quarter snapped a streak of 21 straight misses from deep over five games. Oubre finished the game with nine points, going 1 of 9 from deep.

Hornets: Return home to face Philadelphia on Sunday. Charlotte is 0-3 against the Sixers this season.

Wizards: Visit Chicago on Sunday to begin a three-game trip.