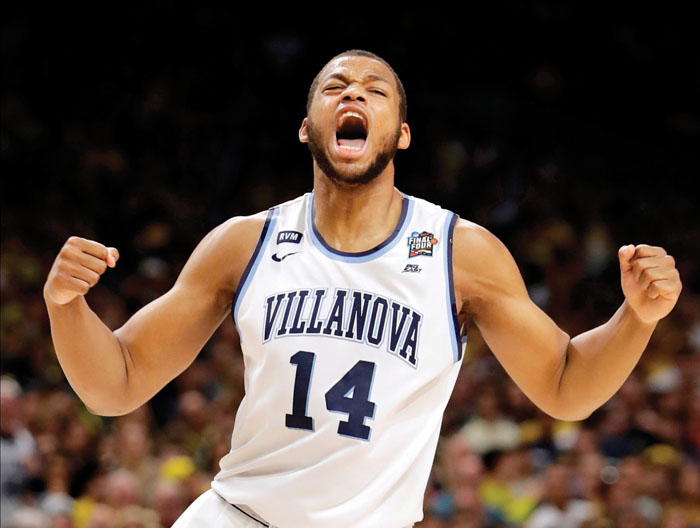 Villanova forward Omari Spellman celebrates during the first half against Kansas in the semifinals of the Final Four NCAA college basketball tournament, Saturday, March 31, 2018, in San Antonio. (AP Photo/Eric Gay)

SAN ANTONIO (AP) — To sum things up, Villanova was feelin’ it Saturday night.

Like every night that ends in “Y’’ for the Wildcats.

Like all these games where they walk away with a “W’’ and leave their opponents shaking their heads.

Villanova moved within a win of another title, sinking a Final Four-record 18 3-pointers, while cementing itself as the most-prolific 3-point-shooting team in college history in a 95-79 runaway over Kansas.

“Well, that was just one of those nights,” Villanova coach Jay Wright said.

Normally the third or fourth option on a team full of shooters, junior wingman Eric Paschall led the barrage, going 4 for 5 from 3, 10 for 11 overall, and finishing with a career-high 24 points.

But the hoop was as wide as the Alamodome for pretty much everyone in a Wildcats jersey.

Seven ‘Nova players made 3s. Villanova tied the Final Four record for 3s in game with 3:45 left in the first half. The Wildcats shot 45 percent from 3 — 5 points higher than their season average, which ranked 15th in the nation this season.

Next up is Michigan, which will try to guard the perimeter Monday night when Villanova (35-5) goes for its second title in three seasons.

Nobody has had much success this season, and in what turned out to be an unexpectedly lopsided matchup between top seeds, Kansas (31-8) certainly didn’t Saturday night. AP Player of the Year Jalen Brunson made three 3s and finished with 18 points. Omari Spellman made three, as well, in a 15-point, 13-rebound monster game.

“As good a team as I’ve played against that I can remember,” Kansas coach Bill Self said. “We got spread out on defense. The game plan went to crap. You get caught in between on defense, and it’s the worst thing you can do.”

About a minute into the second half, Paschall drained a 3 for Villanova’s 14th of the game, breaking a Final Four record first set by UNLV in 1987.

Much earlier, at about the 13-minute mark of the first half, Collin Gillespie spotted up and swished for ‘Nova’s sixth 3 of the game, which gave it the NCAA record for 3s in a season, with 442.

VMI set that record in 2007. Very few remember that team, though, because even though the importance of the long shot has grown as the decades have passed, it’s never been thought of as a guaranteed way to win consistently.

Wright’s team is laying waste to that theory and, at times, making other teams look bad while doing it.

On Saturday, the typical Villanova possession involved working the ball down low on the wing, then a skip pass across the bottom of the paint, followed by one, two or three passes around the arc until somebody got open. It usually worked. Against both the Jayhawks’ man defense and their zone. Most of ‘Nova’s 18 makes barely skimmed the net.

“We knew they’d have to miss some pretty decent looks, but they got anything they wanted early, and they knocked everything down,” Self said.

Gillespie’s record-setter gave Villanova a 22-4 lead, and at that point, Kansas had as many turnovers as points and had taken as many timeouts as it had field goals.

Self did what he could, urging his 7-foot center, Udoka Azubuike, out of the paint and into the faces of this group of hybrid forward-guards, all of whom can shoot. The big fella couldn’t get there.

The Jayhawks, back in the dome where they cut down the nets 10 years ago after their last title, made mini runs. But the deficit never got below double digits.

Devonte Graham, the senior guard who has been the glue in this Final Four season, led Kansas with 23 points. Malik Newman, who pushed his game into overdrive during the postseason, had 21. They combined to make 6 of 13 3-pointers themselves, but didn’t get much help.

Much of that was credit to the Villanova defense. Wright and co. spent more time in the postgame talking about defense and rebounding than the shooting clinic they put on.

“If we didn’t get stops, it was getting back to being a five- or six-point game,” Wright said.

About the only drama in the second half was whether the Wildcats would top Loyola Marymount’s NCAA Tournament record of 21 3-pointers in a game (against Michigan in 1990). Didn’t happen, mainly because they didn’t need it too.

“They’ll be hard for anyone to deal with,” Self said, “if they shoot the ball like that.”