Prepare for a 3-point heavy Final Four in San Antonio 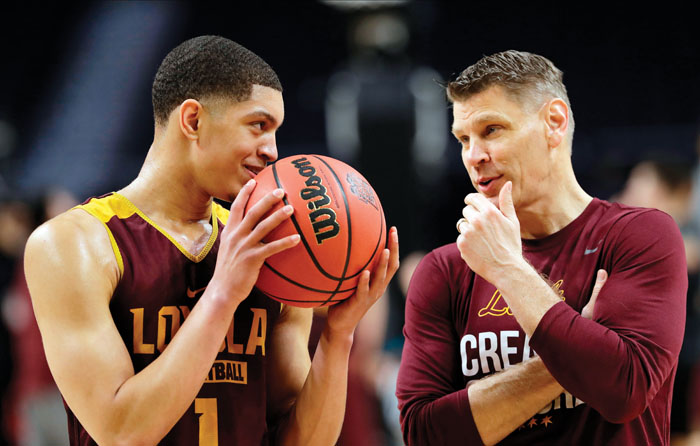 SAN ANTONIO (AP) — These days, the Final Four is all about the 3.

Gone are the days when the long-range shot was the low-percentage bet in college basketball compared with layups and midrange jumper. Now — much like its record usage in the NBA — it’s an indispensable piece of the arsenal for any team with serious hopes of winning the national championship.

Look no further than the last four teams at the Alamodome still contending for the NCAA title. Villanova, Kansas, Michigan and Loyola-Chicago all can knock down 3s at high rates and won’t hesitate to launch them — which could mean a big leap from past Final Fours when 3s weren’t quite so plentiful.

“It’s a huge part of our offense, and the other teams as well,” said the Wolverines’ Moe Wagner, a 6-foot-11 forward who shoots just shy of 40 percent from behind the arc. “It’s really a big part of college basketball to be honest with you. There are no good teams out there anymore that can’t shoot.”

The 3-point production jumps out in each team’s stats:

— Villanova (34-4) shoots 40 percent from behind the arc and has made 436 3s, putting the Wildcats six away from matching the NCAA Division I record set by VMI in 2007 entering Saturday’s national semifinal against fellow 1-seed Kansas.

— Michigan (32-7) has five players shooting at least 37 percent from behind the arc.

And don’t forget, the only reason Loyola-Chicago and Michigan are even meeting in Saturday’s first semifinal is because both made a miss-and-go-home 3 in the tournament.

The Ramblers got one just before the buzzer from Donte Ingram to beat Miami in the first round, while the Wolverines needed Jordan Poole to beat the horn to survive against Houston in the second.

Only one team — Oklahoma in 2016 — had averaged at least nine made 3s per game in the past eight Final Fours, but there are three this weekend alone: Villanova at 11.5, Kansas at 10.1 and Michigan at 9.0.

There was a common refrain among players Friday about their use of the 3.

“We just try to lean on the best shot,” said Loyola-Chicago freshman Lucas Williamson, who is shooting 42 percent on 3s. “We’re not really banking on just winning the game by 3s.”

Still, it’s easy to see where some of that influence is coming from: the NBA.

As the quartet bring the potential for a 3-heavy weekend on college basketball’s biggest stage, the NBA was set Friday night to set a league-wide record for made 3s for the sixth straight season. And the Golden State Warriors have spent the past three-plus seasons putting on a small-ball show full of 3-point barrages, winning two championships and playing for a third.

Now recruits watch Stephen Curry and James Harden repeatedly launching 3s and arrive in college looking to emulate that free-flowing style that is only growing in popularity. And in the college game, 3s are easier because the line is a good 3 feet closer to the basket than in the pros (though Associated Press All-American Devonte’ Graham of Kansas spent time during Friday’s open practice shooting corner 3s from out of bounds).

The influence of the pro game isn’t lost on coaches.

“We all learn from those guys; they’re the best — players and coaches,” Villanova coach Jay Wright said. “And then I think the rules … the emphasis on freedom of movement, lack of physicality is making that the evolution of the game — skill, perimeter shooting.

“And that’s where I think this is going to continue to be a big part of the game. And then in college we all look and see who gets to the Final Four and what they’re doing. And a lot of us emulate that.”

The Jayhawks have long had inside-out post play to go with gritty defense. But this year’s team didn’t have a lot of size outside of 7-foot sophomore Udoka Azubuike, then lost 6-10 freshman Billy Preston to an NCAA eligibility issue that ended with him signing with a professional team in Bosnia without playing a game for the Jayhawks.

Instead, the offense is built around Graham, Mississippi State transfer Malik Newman, Svi Mykhailiuk and Lagerald Vick in a strong backcourt.

“You’ve got to coach to your personnel and coach to your roster,” Self said. “And with our situation, the only chance that we felt and certainly the best chance for us to have a good year would be to get guards to be tough enough to defend a big.

“And if you can do that and you can stretch and play around one guy that can score (inside), that’s usually hard to guard.”