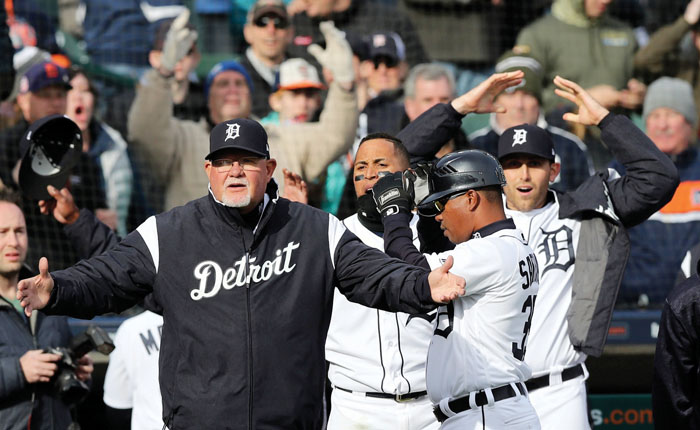 The Detroit Tigers react after a review of a play was overturned during the 10th inning of a baseball game against the Pittsburgh Pirates, Friday, March 30, 2018, in Detroit. Tigers' Nicholas Castellanos was initially called safe at home. (AP Photo/Carlos Osorio)

DETROIT (AP) — Gregory Polanco hit a three-run homer in the 13th inning to lift the Pittsburgh Pirates to a 13-10 victory over Detroit on Friday — about an hour after the Tigers spilled onto the field to celebrate what they thought was a game-winning hit of their own.

Nicholas Castellanos was initially called safe at home in the bottom of the 10th for the Tigers, but a replay review took the run away and the teams played on. Polanco’s drive to right-center on a 3-0 pitch from Alex Wilson (0-1) finally gave the Pirates a comfortable lead — or as comfortable as could be on a wacky day in which both teams scored four runs in the ninth.

By the time the 5-hour, 27-minute game was over, there were only three umpires and one manager left. Plate umpire Mike Everitt exited in the eighth with a concussion after being hit in the mask by a pitch. And Ron Gardenhire — in his first game as Tigers manager — was ejected after the overturned call in the 10th.

Rafael Devers snapped a scoreless tie with a single up the middle that drove in Xander Bogaerts, who doubled off Chaz Roe (0-1) leading off the seventh inning to extend his hitting streak to 11 games.

CINCINNATI (AP) — Max Scherzer struck out 10 in six innings and Washington, in its first game with Dave Martinez as a major league manager, beat Cincinnati to begin defense of its NL East title.

Nationals star Bryce Harper got two hits, but his string of five straight opening days with a home run came to an end.

A day after this opener at Great American Ball Park was postponed because of rain, Scherzer (1-0) picked up where he left off. The winner of the last two NL Cy Young Awards gave up five hits, walked one and permitted just one runner past first base.

Giancarlo Stanton, who homered twice and doubled a day earlier in the opener, went 0 for 4. So did big hitters Aaron Judge and Gary Sanchez. Yet the Yankees, under new manager Aaron Boone, improved to 2-0 for the first time since 2011.

The right-hander who pitched for the Astros in 2016, the year before they won their first World Series, allowed only Max Stassi’s RBI double in the fifth in his new home ballpark, where he had an 8.73 ERA coming in.

ATLANTA (AP) — Carlos Santana drove in J.P. Crawford with a sacrifice fly in the 11th inning, and first-year Philadelphia manager Gabe Kapler went through nine pitchers for his first win as the Phillies beat the Atlanta Braves 5-4 on Friday night.

Crawford hit a one-out single up the middle off Shane Carle (0-1) and moved to third on a single by Cesar Hernandez, who had two hits and two walks. Santana, who hit his first homer with the Phillies in the fifth, drove in Crawford with a fly ball to left field.

Drew Hutchinson (1-0) closed it out when he got Ender Inciarte to hit a shallow fly ball to center field with runners on first and second.

Kapler, who was criticized for pulling Aaron Nola with a 5-0 lead after Nola threw only 68 pitches in the Braves’ 8-5 win on Thursday night, used eight relievers after Nick Pivetta lasted only four innings.

Philadelphia grabbed a 4-3 lead on Nick Williams’ pinch-hit single in the sixth off Jose Ramirez.

The Braves took advantage of the Phillies’ defensive shift to tie the game in the eighth. Luis Garcia walked Freddie Freeman. With the infield defense shifted against left-handed hitting Nick Markakis, Freeman was able to advance to an uncovered third as Markakis was thrown out at first on a high bouncer to Garcia.

The Braves appeared to have the go-ahead run when Dansby Swanson followed with a double and pinch-runner Peter Bourjos was called safe by plate umpire Greg Gibson. But the call was overturned when a video review showed a sliding Bourjos had his right foot in the air as he was tagged by catcher Andrew Knapp.

Philadelphia’s Rhys Hoskins homered in the third off Mike Foltynewicz. Hoskins’ drive landed in the second level of the left-field seats. Santana’s homer in the fifth tied the game at 3-all.

Braves catcher Kurt Suzuki was hit by a pitch on his right hand in the fourth and remained in the game until the sixth, when he was replaced by Chris Stewart. There was no immediate report on Suzuki’s status.

The other half of Atlanta’s projected catching platoon, Tyler Flowers, was placed on the 10-day disabled list before the game after suffering a strained left oblique on Thursday night.

Phillies: RHP Pat Neshek was placed on the 10-day disabled list with a right shoulder strain. The move was made retroactive to Tuesday.

Braves: Manager Brian Snitker said Flowers’ injury was diagnosed as being of mid-level severity. Snitker expects Flowers will need “a couple weeks without doing anything” before taking the next step on his rehab.

Phillies: RHP Vince Velasquez is 0-1 with a 2.77 ERA in four career starts against the Braves entering Saturday night’s game.

Braves: RHP Brandon McCarthy, acquired as part of an offseason trade that sent OF Matt Kemp to the Dodgers, will make his Atlanta debut. McCarthy is 0-1 with a 2.70 ERA in three career starts against the Phillies.