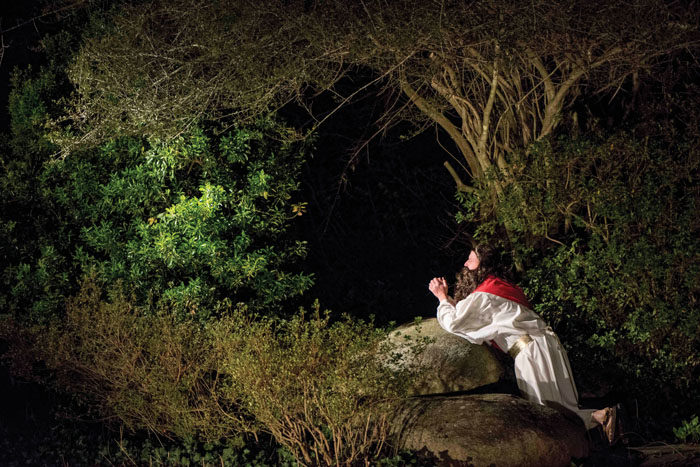 Dale Martin, who is playing the part of Jesus, prays during the Garden of Gethsemane scene in the drama 'Christ's Cross and Crown' at Ebenezar Lutheran Church in China Grove. Jon C. Lakey/Salisbury Post

CHINA GROVE — At the bottom of a grassy hillside on the eastern side of Ebenezer Lutheran Church, it plays out, scene by scene, every Easter weekend.

This is when the congregation of Ebenezer Lutheran presents the outdoor drama “Christ’s Crown and Cross,” telling the story of Jesus Christ’s last week on earth, from his entrance into Jerusalem to his Resurrection from the tomb.

The church has offered the production for 56 years and will do so again tonight and Sunday night.

“It’s an amazing performance,” says director Vanessa DuMont, a member of the church.

The dozen-plus scenes are familiar — things such as Jesus in the temple, the anointing of his feet, the Last Supper, the Garden of Gethsemane, Judas’ betrayal, Peter’s denial, the crosses and the Resurrection.

Dressed in appropriate costumes for the day, the actors pantomime the whole show to a narrated, Scripture-driven recording played over loud speakers. while hundreds watch from the top of the hillside.

Dale Martin, 50, a Duke Energy employee by day, has played the role of Jesus for more than 20 years.

“It’s just an honor to play that role as Christ,” Martin says. “… He was one of the most important people in history.”

“Christ’s Cross and Crown” will be presented at 8:30 tonight and Sunday night. The play runs about an hour.

Before each performance, ELMO (Ebenezer Lutheran Men’s Organization) will serve free hot dogs from 7 to 8 p.m.

“We always say it’s a dinner and a show, and it’s all free,” DuMont says.

The Boy Scouts help direct the parking. The Passion Play’s actors represent members of both Ebenezer Lutheran and other congregations.

“Everybody’s involved,” DuMont says. “Almost the whole community comes out and is willing to help.”

“Christ’s Cross and Crown” started in 1962 with the Luther League at Ebenezer Lutheran. The youth group presented a four-scene Easter play outside the sanctuary. The idea originated under the Rev. Karl U. Dunn, pastor of Ebenezer at the time, and was based on the Passion of Christ Play staged every 10 years in Obergammergau, Germany.

When Ebenezer Lutheran’s annual presentation drew bigger and bigger crowds, adults at the church started to join in.

To accommodate the growing audiences, church officials purchased an adjacent piece of property and built some of today’s permanent structures on it, just for the passion play.

For a time, the performers offered four presentations over the extended Easter weekend, but the crowds are not as large as they once were, and weather always plays a factor in how many people show up. Still, it’s more than safe to say thousands have seen and participated in “Christ’s Cross and Crown” over the past half century.

Several generations of the same family have been among the players.

Church officials have always viewed it as one of Ebenezer Lutheran’s gifts to the community and something it does to the glory of God. The church dates back to 1867.

DuMont and her husband, Bob, joined the church about 18 years ago, and they’ve been part of every production, except one year when they wanted to sit on the hill and take it all in. It was emotional for DuMont.

“It transports you back into the time of Jesus,” she says.

The narrated recording, which the players follow, is the voice of former Ebenezer Lutheran pastor Michael Comer, who is now a pastor in Gastonia.

“It’s such a good recording, we didn’t want to mess it up,” DuMont says.

Because he has done it for so long, Martin knows his role of Jesus and the recording he follows by heart. He thinks he has actually improved in his pantomime.

“I know this one pretty well by now,” Martin says. “I feel like my timing is better.”

Martin and his wife, Sherie, had one of their first dates as audience members of the Ebenezer Lutheran Easter production. “I was impressed with it the first time I saw it,” Martin says.

Within a year or two, he was one of the performers — first as Judas, then as Jesus.

“Sometimes I feel like I don’t look the part,” Martin says. “I’m probably a little heavier and I don’t have the complexion, but from a distance, I don’t think it’s important.”

He and Sherie have made having roles in the production a family affair every year. Their twin sons, now college kids, usually play the thieves being crucified on each side of Jesus.

Because they have to return to their studies at the University of North Carolina at Pembroke, Jonathan and Matthew Martin won’t be able to hold down those roles Sunday night.

DuMont found some replacements, reflecting how people have always stepped up and stepped in for each other.

“Everything just kind of falls into place,” DuMont says. “When I first started, I was frantic every year.”

She has been director for about eight years.

The cast members go through a dress rehearsal on Thursday night, two evenings before the first presentation. It’s not uncommon for many of the veteran performers not to show up for the rehearsal, just because they’ve been holding down the same roles for years.

Bob DuMont, Vanessa’s husband, has been her go-to person for many projects associated with the far-ranging, sprawling sets. He once rebuilt the crosses, for example, and he plays one of the priests before whom Jesus is presented.

Chad Cheeseman, who plays Judas, also works with the sound system. “Our speakers are going to be amazing this year,” DuMont promises.

And the light person is Jerry Drye, who sits in the lighting and sound control house about midway down the hill and pays close attention during the whole production. He synchronizes the lights to the appropriate moments in the play.

“Just about everybody in the church takes part,” he says. “It’s simple, but it works.”