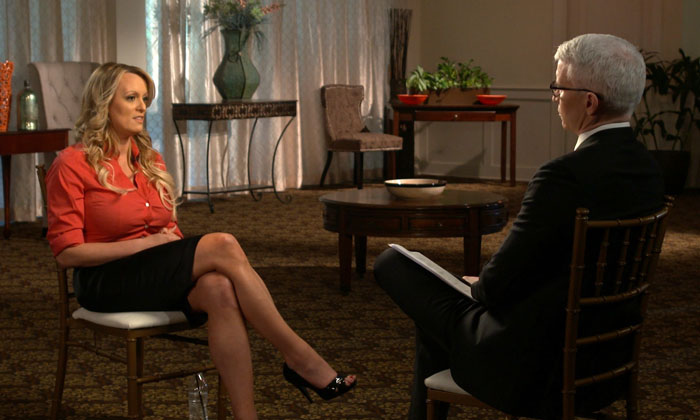 This image released by CBS News shows Stormy Daniels, left, during an interview with Anderson Cooper which aired on Sunday, March 25, 2018, on "60 Minutes." (CBS News/60 Minutes via AP)

Here’s a number that helps explain why Stormy Daniels could have a sizable impact on the fall elections: 67.

That’s the percentage of Americans who told the Quinnipiac poll that President Trump is “not a good role model for children.” His negative rating jumped to 72 percent among women, the voting majority since 1980.

“Americans say President Trump is damaging the country’s image globally, flunking the decency test and setting a bad example for kids,” concludes Tim Malloy of the Quinnipiac poll. “There’s no way to spin or sugarcoat it. The optics are ugly.”

The Stormy story has staying power because it plays into a narrative many Americans — including a fair number who supported Trump — already believe. The president’s career has been blemished by as many moral bankruptcies as financial ones.

Few of the more than 21 million viewers who saw Stormy (real name Stephanie Clifford) on “60 Minutes” thought, “Gee, that’s not the Donald Trump I know.” Her tale was totally believable.

“The Stormy Daniels case is typical of Mr. Trump’s pre-presidential behavior in thinking he can, with enough threats and dissembling, get away with anything,” writes the Wall Street Journal. “He’s never understood that a president can’t behave that way, and this may be the cause of his downfall.”

Trump, of course, will not be on the ballot this fall, but every Republican running will have to answer for the president. And there are strong signs that his personal flaws are weighing heavily on a critical swing group: well-educated suburban women.

They might have voted for Trump — many are traditionally Republican, plus they were tired of Democratic rule and they despised Hillary Clinton — but they simply cannot accept or excuse his boorish behavior.

The Washington Post reported from the suburban Chicago district of Rep. Peter Roskam, a top Democratic target, and interviewed Karrie Sullivan, a Republican who will oppose the GOP lawmaker because of his ties to Trump. “Just the lack of respect for women, the authoritarianism, it’s too much,” said Sullivan, a 47-year-old digital consultant. “As a professional woman, it’s very difficult for me to reconcile.”

Democrats must pick up 23 seats to control the House, and many of their best shots are in districts like Roskam’s: upscale outskirts of cities like Chicago, Los Angeles, Denver and Houston. And frustrated women like Sullivan could well decide the outcome.

“This is shaping up to be the year of the angry, white, female college graduate,” Congressional expert David Wasserman of the Cook Political Report told the Post.
This week, Rep. Ryan Costello, a Republican who represents a district outside Philadelphia, joined a rising tide of GOP retirements. A court-ordered change in congressional districts certainly encouraged Costello to quit, but he admitted that the Stormy story, and his growing reluctance to defend the president, contributed to his departure.

“The local Democrats and the left have become more engaged and, candidly, more angry by the week as President Trump says things and does things which many Republicans, myself amongst them, from time to time do disagree with,” he told MSNBC. But if he does criticize the president, he adds, he gets trashed by the true-believing Trumpistas.

The Stormy story does not seem to be eroding the president’s hardcore base of supporters. They knew his faults and falsities when they voted for him, and he’s kept his promise to name federal judges who support their deeply held beliefs on issues like abortion, gun rights and religious liberty.

Trump’s favorable ratings have edged upward in recent months, fueled by the tax bill and a healthy economy, and now averages about 42 percent. But those ratings are still historically low, and the electoral energy clearly favors the anti-Trump side. Democrats have seen an upsurge of enthusiasm in Roskam’s district, with one party organizer telling the Post, “Trump has not done much that’s good for (his) party, but he’s certainly raised civic engagement.”

So has Stormy Daniels. Like Trump, she won’t be on the ballot in November, but a lot of moms will think about her — and their children — when they go to vote.