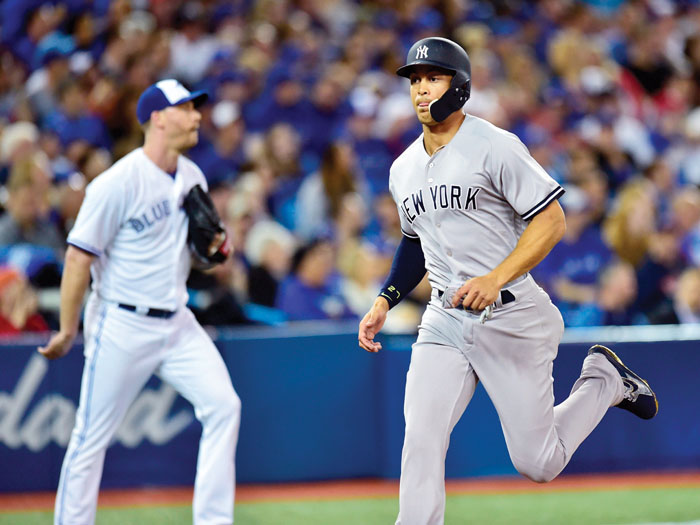 Stanton began his Yankees career in style , hitting the hardest-hit opposite-field home run since Major League Baseball began tracking exit velocity in 2015, adding an RBI double and a second homer into the center-field party deck in the ninth. Stanton’s four RBIs led the Yankees over the Toronto Blue Jays 6-1 Thursday and gave Aaron Boone in a win in his first game as a professional manager.

“My biggest challenge, I told myself, was going to be to be calm,” Stanton said. “You want to get the first one out of the way and then you can relax.”

Stanton was given the silent treatment by the Yankees , except for head athletic trainer Steven Donohue, when he returned to the dugout after the second home run. So Stanton high-fived imaginary hands.

Stanton became the seventh Yankee to hit multiple home runs on opening day, the first since Joe Pepitone in 1963.

“Every pitch, it just seemed like he was in a really good place,” Boone said.

“It’s an interesting feeling, man,” Stanton said. “It was similar to my first one ever.”

Stanton led the major leagues with 59 home runs last year and won the NL MVP, then was acquired from Derek Jeter’s payroll-paring Miami Marlins to join AL Rookie of the Year Aaron Judge on the resurgent Bronx Bombers, who fell one win shy of reaching the World Series last year. Stanton became the first player to homer in his first Yankees plate appearance since Judge two years ago.

Stanton doubled off John Axford in the fifth and hit a 434-foot home run off Tyler Clippard in the ninth.

“All day long, I thought he was winning pitches,” Boone said.

Luis Severino (1-0) pitched 5 2/3 scoreless innings for the Yankees, who won their opener for the first time since 2011.

“The key to the game was Severino,” Blue Jays manager John Gibbons said. “He shut us down pretty good.”

Brett Gardner hit a leadoff home run off Danny Barnes in the seventh. Judge singled, doubled and walked for New York, which opened the season with a road win for the first time since 2006 at Oakland.

“It’s definitely fun to do it for real and get off on a good note,” Boone said.

Boone had been a television analyst since retiring as a player after the 2009 season. New York fired Joe Girardi after the Game 7 loss to Houston in the AL Championship Series, deciding it needed a new approach.

Severino got a visit from pitching coach Larry Rothschild after issuing consecutive walks in the first, but escaped the jam by striking out Kendrys Morales.

The Blue Jays have lost seven straight home openers, the longest slump in franchise history. Toronto’s two hits were its low for an opener.

“My mom sent me a lot of emojis this morning,” Boone said before the game. “A lot of hearts, prayers, the whole bit.”

Gibbons said 3B Josh Donaldson is dealing with deadness in his throwing arm. Donaldson’s throws to first base were noticeably weak.

“He was definitely a little off so we may need to DH him a little bit more,” Gibbons said. “We don’t think it’s a big deal, it’s just dead.”

The Blue Jays retired the number of late pitcher Roy Halladay in a pregame tribute, and added his name to their Level of Excellence. In lieu of a first pitch, Halladay’s teenage sons Braden and Ryan, placed a ball on the mound, which was covered in a black cloth with Halladay’s 32 in white. Halladay died when his two-seater plane crashed into the Gulf of Mexico last Nov. 7.

Did Gregorius used a face screaming in fear emoji for Stanton in his postgame recap and wrote “i feel bad for the balls.” Gregorius credited him with only three RBIs.

Blue Jays: SS Troy Tulowitzki (right heel) was placed on the 60-day DL, guaranteeing he will miss at least 30 games for a seventh consecutive season. The move is retroactive to March 28. Tulowitzki sustained a season-ending ankle injury last July 28 and was not able to participate in Toronto’s exhibition schedule. … OF Anthony Alford (right hamstring) and OF Dalton Pompey (right wrist) were placed on the 10-day DL, retroactive to March 26.

Blue Jays: RHP Aaron Sanchez had an AL-best 3.00 ERA in 2016 but made just eight starts last season because of persistent blister issues. He’s 2-2 with a a 2.40 ERA in 13 career games against New York, including three starts.

James Shields (1-0) surrendered four runs in the first inning but wound up lasting six innings, holding his former team without a hit after that shaky first.

MIAMI (AP) — Ian Happ became the second player to homer on the first pitch of the major league season, and Anthony Rizzo made his emotional homecoming even more memorable with a home run.

Rizzo homered into the upper deck in the second inning — an unscripted tribute to the victims of last month’s shooting at his former high school in Parkland, Florida. As he crossed home plate, Rizzo patted his chest and pointed to the sky.

OAKLAND, Calif. (AP) — Marcus Semien singled into an empty center field with one out in the 11th inning, beating Los Angeles’ five-man infield.

Shohei Ohtani connected on the first pitch he saw for a single in a much-hyped major league debut for the Japanese two-way star. Batting eighth as designated hitter, Ohtani swung at the first pitch and grounded a hard single to right field off Kendall Graveman in the second inning. He grounded out his next three times up before a strikeout in the 11th.

It was the first run allowed this year by Kershaw (0-1), including spring training. The seven hits given up by the left-hander are the most off him on opening day, when he is 5-1.

Ty Blach (1-0) pitched three-hit ball over five innings, and Hunter Strickland closed out the ninth for his first save.

Springer hit a 2-0 pitch off Cole Hamels (0-1), becoming the only player in MLB history with leadoff homers in consecutive season openers, according to Elias. Jake Marisnick also homered for the Astros.

Noah Syndergaard (1-0) struck out 10 and walked none in six innings after missing most of last season with a torn lat muscle. Leadoff man Brandon Nimmo, subbing for injured All-Star Michael Conforto, reached safely four times and scored twice as the Mets chased a furious Carlos Martinez (0-1) in the fifth inning to make Mickey Callaway a winner in his first game as a manager.

ST. PETERSBURG, Fla. (AP) — Denard Span made a huge splash in his debut for his hometown team on opening day, lining a bases-loaded triple to highlight a six-run rally in the eighth that sent Alex Cora to a loss in his first game as a major league manager.

Span’s triple was only Tampa Bay’s third hit of the day and gave the Rays a 5-4 lead. Adeiny Hechavarria followed with an infield single off Carson Smith (0-1), providing a two-run cushion for closer Alex Colome to earn a save.

BALTIMORE (AP) — Adam Jones homered on the first pitch from Fernando Rodney (0-1) starting the bottom of the 11th inning, and Baltimore won its eighth straight opener.

Richard Bleier (1-0) worked one inning for the Orioles, who made the most of five hits.

Minnesota has lost nine of its last 10 openers, including three against Baltimore.

SAN DIEGO (AP) — Orlando Arcia singled in Ji-Man Choi with two outs in the 12th off Adam Cimber (0-1), who was making his big league debut.

Jeremy Jeffress (1-0) pitched two innings for the win. Jacob Barnes struck out the side in the 12th for the save.

Eric Hosmer, signed to a $144 million, eight-year contract early in spring training, went 0 for 4 with a walk and two strikeouts in his Padres debut.

ATLANTA (AP) — Nick Markakis hit a three-run homer off Hector Neris (0-1) with two outs in the ninth inning, capping a comeback from a 5-0 deficit as Philadelphia lost in Gabe Kapler’s first game as a big league manager.

Freddie Freeman and Ozzie Albies also homered for Atlanta, which won with a walk-off hit on opening day for the first time since 1998.

Arodys Vizcaino (1-0) struck out the side in the ninth.

A must-see Masters with Tiger back among best