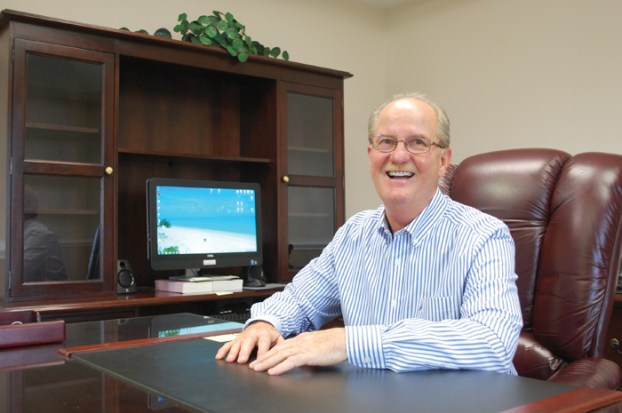 Sam Foust sits in his office at the Salisbury Housing Authority. Foust served as the executive director for seven years and oversaw the construction of Brenner Crossing. (Jessica Coates/Salisbury Post)

During his 10 years with the Salisbury Housing Authority — seven of them as executive director — Foust did quite a bit.

Foust’s last day on the job was Thursday and, from his office, he recalled the project that he said was “by far” his biggest — Brenner Crossing.

“It was kind of a big puzzle to put together,” Foust said.

He had his first meeting about the affordable housing complex on Brenner Avenue just two days after becoming executive director.

“(Rep.) Mel Watt, his office called and wanted to come to Salisbury and for me to show him our public housing projects,” Foust said. “So I intentionally saved Civic Park for last as we rode around.”

Foust said Civic Park Apartments — the apartments Brenner Crossing replaced — was the Housing Authority’s “most needy” property when he becamse executive director in 2010.

“And when we got to Civic, I pulled over and said, ‘I need your help. Help me find some kind of money to do something for this neighborhood,’” Foust said.

Salisbury ended up being “by far the smallest city” to receive a Choice Neighborhoods Planning Grant in the program’s first round. Foust said.

The success of the project would not have been possible without the help of Laurel Street Residential, former Mayor Susan Kluttz, the city’s planning staff, Livingstone College and others, he said.

“It was truly a huge team effort,” Foust said. “When we started, I had no idea there were so many people that was going to get involved and do their part.”

Livingstone College President Jimmy R. Jenkins Sr. did a “land swap” with the Salisbury Housing Authority for Phase 1 of the construction.

“They wanted some apartments that we had near their football stadium so they could build a new entrance and a fieldhouse. And we needed vacant land. And they just happened to own some land that butted up against Civic Park,” Foust said. “So without (Jenkins’) cooperation and partnership, I don’t know if it would have gotten off the ground or not.”

Foust said a leasing company moved the last few tenants into the Phase 2 construction of Brenner Crossing in late summer 2017, meaning that Foust worked on the project for almost the entirety of his time as director.

Foust said there were other important projects during his tenure, including helping find homes for about 60 homeless veterans in Rowan County.

“We were real proud of that,” Foust said.

Before Foust began with the Salisbury Housing Authority, he was a teacher and principal in Guilford County schools for 30 years. He said he sees “a lot” of similarities between his education career and his career with the Housing Authority.

The trick to good leadership is to hire good people and give them “the freedom they need to do their jobs,” he said.

He said he had a “great, fantastic” staff at the Housing Authority, from the maintenance staff to the financial department to the occupancy staff.

“And they’re all equally as important,” Foust said. “You can’t have a weak spot, and we don’t.”

Foust said he is excited for his successor, Bradley Moore, to take over as executive director starting Monday.

Moore, who’s been with the Housing Authority since 1999, said his long-term goal is to continue to improve the quality of life for residents by making improvements to housing.

“Sam came in and had a vision for what he wanted to do,” Moore said. “And as a manager working under him, he let me lead my department, and I felt very supported. I think we were a great team.”

Foust is getting married next month and plans to spend his retirement traveling and volunteering with his wife.

SALISBURY — If she had a bad day at work, no one would have ever known it because Melanie Clark... read more