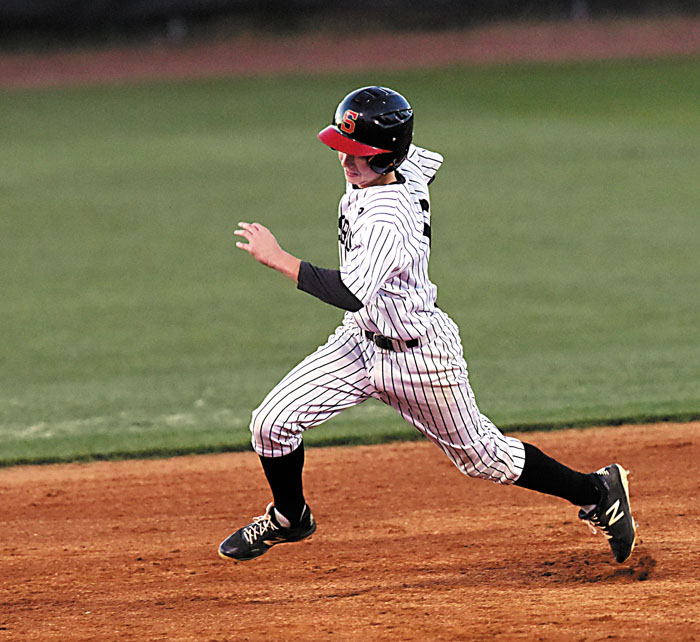 Wayne Hinshaw file photo/for the Salisbury Post ... In an earlier game this season, Salisbury’s Vance Honeycutt rounds second base. Honeycutt had two hits on Friday, but the Hornets fell to Robinson, 9-4, in the F&M Bank Classic in Kannapolis.

Then all the wheels came off the victory bus.

Robinson scored five runs in the top of the seventh inning to expand a tenuous one-run lead and claim a 9-4 win over the Hornets. The outcome was sealed thanks to a double play that was not called, followed by a pair of Salisbury errors that opened the floodgates.

“I am disappointed because I felt like we had them right where we wanted,” Herndon said of the decisive final inning. “If we can put up a zero in the top half, we are down just 4-3 with the top of our order coming up. We might have tied it or walked it off, but it just didn’t turn out that way.”

The winning Bulldogs had posted a four-spot off Salisbury starter Bo Rusher (1-1) in the top of the second, then yielded single runs in the third, fourth and fifth innings, making it 4-3, heading to the seventh.

Charlie Botello started the final frame for Robinson with a single off Rusher, then leadoff man Luke Nelson was plunked by a pitch for the third time in the game. That set the stage for the controversial non-call on a potential double play. Jason White grounded sharply to second baseman Vance Honeycutt who flipped to shortstop Griffin Myers for the force at second. But the relay to first for the double play was a step late, putting runners on the corners.

Herndon felt the base runner at second (Nelson) impeded the relay throw when he ran straight through the bag without a slide.

“I have got to read up on the interpretation of the rule,” Herndon said, “but it should have been called interference and a double play. That call changed everything. The umpire told me the runner did not impede the throw.”

The next two batters reached on infield errors by Salisbury, bringing in four runs. Bulldog Chase Orrock greeted reliever David Holden with a single to center field to drive in another. When the dust settled, Salisbury trailed, 9-3. Three of the insurance runs were unearned.

Rusher cranked a two-out, RBI-triple for the Hornets in the bottom of the seventh for the final margin.

Robinson broke on top, 4-0, in the second inning with three hits, including a key two-run double by White and a sacrifice fly by Nelson. Bulldog starter Max Agnew (1-0) kept the Hornets off balance with a mixture of breaking pitches and well-placed fast balls to maintain the lead.

“Agnew is our number three guy and spot starter,” noted Robinson head coach Ryan Hodges. “He did a good job pounding the strike zone and bringing a little bit of heat. His motion is deceptive, which fools a lot of hitters.”

Hodges also said he felt his team had enough pitching depth to make a strong showing in the tournament. “At this point, as long as we are in the winner’s bracket,” Hodges said, “we are going to play to win it all.”

Agnew (1-0) earned the win by going 5.1 innings, allowing seven hits and striking out five Salisbury batters. Love and Jake O’Brien came on in relief to close out the game.

Salisbury did put up single runs against Agnew in the third, fourth and fifth innings to chip away at the lead, but could never get even. Rusher drove in the first run with an RBI-ground out in the third, then Will Taylor delivered an RBI-single in the fourth, cutting the deficit to 4-2. In the fifth, Honeycutt singled and scored on a Rusher single to make it 4-3.

Rusher led the Hornets at the plate with a pair of hits and three RBI. Honeycutt and Jack Fisher added two singles each. For the Bulldogs, Love led the offense with three hits, including a triple and two driven in. Salisbury swiped six bases in the game, but left eight runners stranded. Robinson left six runners on base.

“Robinson is a good team that makes you pay for your mistakes and we sure made them,” Herndon said. “But we are still going to come out and compete tomorrow and Monday. We expect to make plays, we expect to score runs and we expect to win.”

The Bulldogs (8-3), of the 3A South Piedmont Conference, now move into the semifinals Saturday afternoon at 4 pm against Carson. Salisbury dropped its second in a row to fall to 10-4 on the season and will take on Mt. Pleasant Saturday morning at 11:00, in the consolation bracket. The tournament concludes Easter Monday with four games, including the championship game at 6:30 pm.