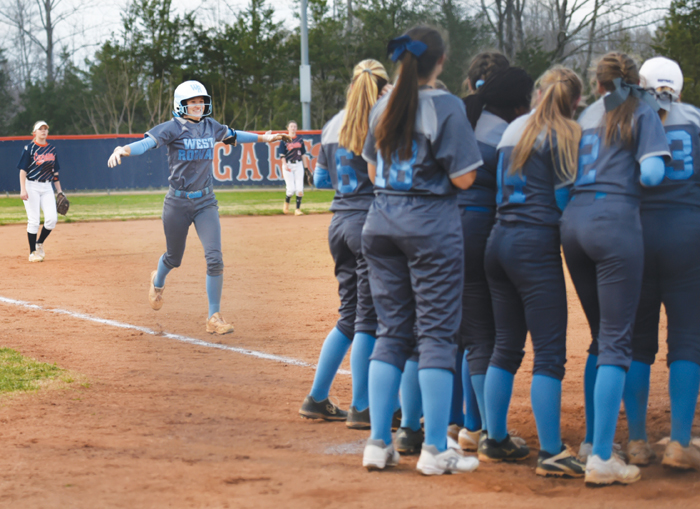 CHINA GROVE — There were great expectations for a West Rowan softball team that returned seven starters, but then came a string of bewildering, error-filled performances.

Girls were over-swinging, over-throwing and  over-pitching. It’s happened before. Hear and read about how great you’re going to be, and there’s serious pressure to justify the hype.

“We lost three in a row,” West coach Jimmy Greene said. “Believe me, losing three in a row wasn’t any fun for any of us, but I think the girls are having fun now and enjoying the game again. They’re breathing and relaxing, and they’ve started smelling the grass a little bit. So much of this game is mental. We’ve worked on that as much as we have the physical things.”

There were smiles all around in the West dugout after Thursday’s 6-4 win at Carson. It was basically a make-or-break, do-or-die game for the Falcons as far as the North Piedmont Conference race. They rode clutch performances from two of their veterans —  pitcher Hannah Roberts and third baseman Mary Sobataka — to a hard-fought victory.

“It took us a little while,” said Sobataka, the former shortstop who has been shifted to third base. “But I think we’ve figured some things out. We’re trying to get everyone where they can play their best.”

Roberts not only pitched a complete game, she had the pivotal hit. Her two-out, two-run single in the third inning didn’t look like much, but it turned a 3-2 West deficit into a 4-3 West lead. The Falcons didn’t trail again.

“Carson beat us in our  conference tournament last year, and this was the first time we’ve played them since then,” Roberts said. “I know they wanted to beat us again, but we were ready for them.”

“Carson has been a very hot team, and Rylie Stewart has been pitching like a champ,” Greene said. “We knew it would be tough.”

West got on top, 2-0, in the top of the first. With two on and two out, Morgan Corriher made solid contact and lifted a ball up in the jet stream in center field. Carson’s sure-handed Maci Cooper appeared to have the ball tracked, but the wind pushed the ball over her outstretched glove, and the Falcons had two runs. In the scorebook, it was a two-run double, although it’s a catch Cooper probably makes 90 percent of the time.

Carson wasn’t fazed and tied it, 2-2, in the bottom of the inning on RBI singles by freshmen infielders Kary Hales and Liza Simmerson.

In the bottom of the second, Carson went on top, 3-2. Katelyn McGee tripled on a hard ground ball right over the third-base bag. Cooper got her home with a bunt, and the Cougars had their first lead.

Parker Greene singled through the right side to start the West third, and Sobataka walked. Stewart got the first out on a routine fly by Taylor Walton.

Corriher was up next. She saw Jess Freeze was playing back at third base and conveyed an eye-contact signal to Coach Greene that she was going to lay down a bunt. It wasn’t a bad bunt, but Stewart jumped off the mound, fielded the ball and got the second out of the inning at first base.

“You want that bunt to be down the line, to be either a base hit or a foul ball, but the pitch was inside and Morgan didn’t quite get the bunt past the pitcher,” Coach Greene said. “But it  still wasn’t a bad play. She moved two runners.”

Roberts stepped into the box with two teammates in scoring position, and she promptly turned that bunt into a great play.

“Riley was throwing a lot of pitches outside, but she got a changeup inside to me, and I went with the pitch,” Roberts said.

Roberts punched the ball over Freeze’s head and into left field, and West led, 4-3.

“We were so close today,” Duncan said. “The play I’ll remember was that bloop hit to left field. That was the biggest one.”

In the circle, Roberts kept the ball down and started putting up zeroes with a lot of help from her infield friends. West turned double plays in the third and fifth.

“We’ve really cleaned up our defense and we also didn’t strike out  as much as we have been,” West center fielder Hannah Pratt said. “That’s improving on offense and defense.”

In the fifth, Parker Greene drew a walk by taking a close 3-2 pitch near the outside corner, and then Sobataka knocked Stewart’s next pitch over the left-field fence for a 6-3 lead. She’s been incredibly hot the past week or so. She’s hit seven homers this season. This was her sixth in West’s last four games. Sobataka weighs about 115 pounds, but power is about bat speed, not bulk, and she has awesome bat speed reminiscent of former West slugger Hunter Gibbons.

“I know you wouldn’t think to look at me that I could hit home runs,” Sobataka said. “But I’ve been getting some good pitches to  hit.”

In the bottom of the fifth, Carson edged a run closer when Katie Jewell, who played a fine defensive game at shortstop, rifled a run-scoring single up the middle.

“We played a really good game,” I thought,” Stewart said. “We hit the ball, we made a lot of nice plays defensively, and we played as a team. I know I could’ve pitched better than I did today, but we’ll get to play them again.”

Roberts got the Cougars out in the sixth to keep that 6-4 lead with the help of a nice catch by right fielder Kaylin Dowling.

In the seventh, Pratt made a fine catch for the second out, charging in from center field. That snag kept the tying run from getting to the plate.

“I started back on that ball, but then I realized it wasn’t going as far as I thought,” Pratt said. “I had to rush in for it.”

She got there, and one infield popup later, the Falcons had their biggest win of the season.”

There were only five strikeouts in the game. Both teams can swing it.

“West is good,” Duncan said. “Usually there’s a break in the lineup, but they don’t have one. They can hit up and down.”

“Today our defense looked more like it’s supposed to look,” Sobataka said. “Everyone played together. Everyone looked comfortable.”