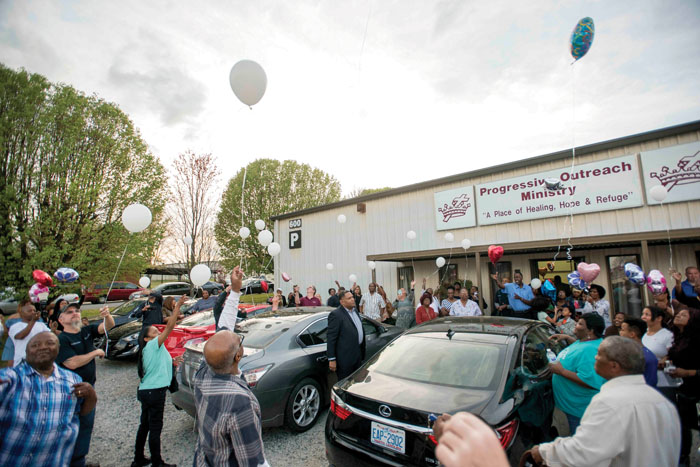 Balloons are released in memory of Melanie Clark at a service of remembrance Thursday at her church, Progressive Outreach Ministry on Long Street. Jon C. Lakey/Salisbury Post

SALISBURY — If she had a bad day at work, no one would have ever known it because Melanie Clark always wore a smile — and she often made sure you smiled, too, said co-worker Doug Seaman Jr.

His memory of Clark, who was murdered about a week ago by her grandson Joshua Dimitri Clark, was one shared at a celebration of life service Thursday evening at the church where Melanie Clark was a longtime member, Progressive Outreach Ministry.

Seaman said he and Melanie, who was known as Mel, worked alongside each other at Freightliner for 18 years.

“She was funny, lovable, respected and respectable,” he said.

He said they were close friends.

“We were like 10 toes in one sock — now that’s tight,” Seaman said to laughter.

He said they shared laughs and stories about their families.

Clark was like a breath of fresh air, and she uplifted those around her, Seaman said. He said he has not even thought about what the workday would be like without Clark in it.

“Every day that Mel walked into work, she had a smile like she won the lottery,” Seaman said as the crowd laughed.

Seaman said he thanks God for the time he had with her.

Clark, 62, was discovered dead by her family on Monday after she didn’t show up for church on Sunday. The last time she was known to be seen by anyone was Saturday. The Rowan County Sheriff’s Office was called to Clark’s Dulin Avenue home on Monday night to assist emergency personnel with what was believed to be a person in cardiac arrest.

Authorities determined that Clark was already dead. Authorities identified her grandson as the suspect early in the investigation. Joshua Clark was arrested the next day.

An arrest warrant said Joshua Clark took his grandmother’s debit card. He remains in the Rowan County Detention Center without bond, charged with first-degree murder and robbery with a dangerous weapon.

She said Melanie was there for her and her siblings.

“Mel was strong. I thank God for all of you being in her life,” Jones said to the crowd.

“There are some things we don’t understand. She went through a lot of things,” Jones said. “She was a good person taken away.”

Jones said it’s terrible the way her sister died. Clark always showed the love of God to everyone and encouraged people to love more, she said.

Longtime friend and junior high classmate Sydney May spoke about how she was a nervous 13-year-old at the newly built North Davidson Junior High School when she met Clark.

“She was one of my first friends,” May said.

May said Clark told her they would get through school together.

“On that cross, (Jesus) said, ‘It is finished.’ But he wasn’t finished. It is only begun,” she said.

Co-worker Bud Eller said he has heard Clark being described as hardworking and churchgoing.

“I couldn’t think of a better way to describe her,” he said.

Eller said Clark was only about 5 feet tall, but when she talked, he listened.

“If you met her one time, she was like your family,” he said.

He said if there were more people like her in the world, it would be a better place.

“The life that she lived, it touched and affected everybody,” said Pastor Nasby Mills Jr.

He said Clark had a beautiful attitude toward life, even when things were bad. Mills and his wife, Sheila, have known Clark for more than 20 years. The two met Clark through their jobs at Freightliner.

After the memorial service, family and friends gathered outside to release white balloons in honor of Clark.

Funeral services have not been announced.