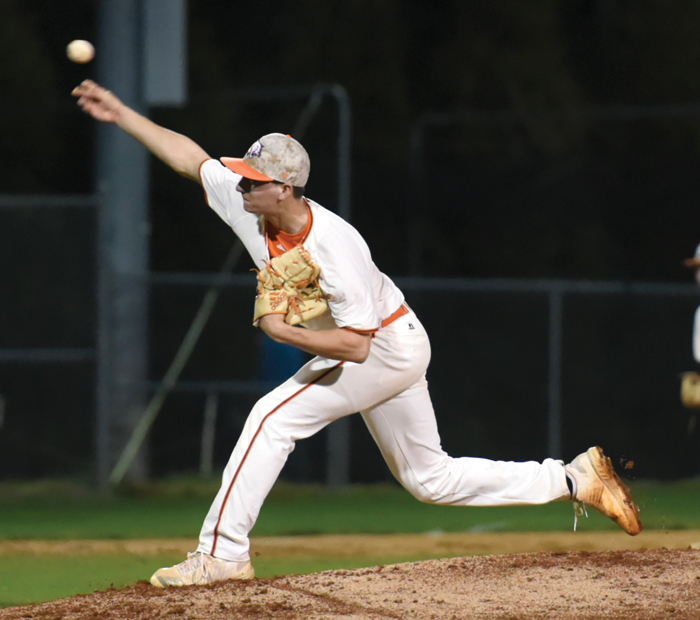 CHINA GROVE —All of those mid-month rain showers must have fertilized the Carson baseball team’s lineup.

“We had a slow start but I’m glad we’ve picked it up,” Barringer said, moments after his fifth-inning moonshot gave league-leading Carson (9-3, 4-0 NPC) its eighth straight victory. “Part of it was the weather and part of it was being ranked first in the state in the pre-season poll. We felt pressure from that and came out flat. I guess everyone was thinking we’d just roll through this.”

The Cougars are rolling now. They banged out 12 hits and scored in every inning in Tuesday’s 18-2 romp over Statesville. Against West (6-6, 2-2), they rode pitcher Owen White’s golden right arm to another loud-yet-efficient, mercy-rule blowout.

“Owen didn’t have his best stuff, but he was still pretty daggone good,” said winning coach Chris Cauble. “In the field we made all the plays we needed to. Pitching and defense will keep you in every game you play.”

The Falcons struggled with both. They committed four errors —which Carson parlayed into eight unearned runs — and had their modest, four-game winning streak snapped. Losing pitcher Daniel Durham, a junior southpaw, yielded seven runs on eight hits in 3 2/3 innings, but only one run was earned.

“Obviously, we didn’t play as well as we should have,” said West coach Seth Graham. “When you drop routine fly balls, you’re not putting yourself in position to win ballgames. We’re averaging about three errors a game, so this was right on cue. We’ve got to get better at making routine plays.”

White, meanwhile, limited West to three singles — one in each of the first three innings. Payne Stolsworth was the only Falcon to reach second base, following a second-inning single and a walk by teammate Jake Perez. Otherwise, White was a master moundsman once again, finishing a 76-pitch outing with eight strikeouts and easily winning his fifth game.

“I don’t know,” the hard-throwing senior said after retiring 10 of West’s last 11 batters. “I couldn’t really get my momentum going tonight. I felt a little off. It seemed like it took me too long to get going. I need to be on right away.”

At least his teammates were. Carson opened the scoring against Durham in the last of the first. Cam Prugh laid down a gorgeous bunt single that died halfway down the third-base line and advanced to second base on Barringer’s two-out walk. Maddux Holshouser delivered the run with a ground-ball single into right field.

“The bottom of the order was magnificent today,” said Gilmore, a senior right-fielder. “We all came in swinging and focused for this game. There was no letdown.”

Carson had a 7-0 lead when it came to bat in the last of the fifth against West reliever Henry Hall. Gilmore’s liner to right plated Hales and another run crossed when Brycen Holshouser’s infield grounder was muffed. That set the stage for Barringer, who turned a 1-2 pitch from right-hander Carsen Bailey into a no-doubt-about-it grand slam to left, sending the overflow crowd home early.

“It was middle-in and I was trying to tattoo it,” he said after belting his fourth homer. “Right in the spot I like. I wasn’t looking to hit a sacrifice fly. I’m trying for extra-base hits every time. I’ll always take a single, but I like to do some damage.”

NOTES: White has 48 strikeouts and hasn’t allowed an earned run in 26 innings. The victory, witnessed by about 15 pro scouts, was the school-record 27th of his career. … Barringer, who also doubled home a run in the fourth inning, leads Carson with 13 RBIs. Seven of his 10 hits have gone for extra bases. … West outfielder Mykal Berger singled in the third and was promptly picked off. He’s hitting .361 with a team-best nine RBIs. … The Falcons meet West Stanly in the East Rowan Spring Break Tournament on Saturday afternoon. Carson tries to avenge a season-opening loss to Mount Pleasant today at Intimidators Stadium.