A must-see Masters with Tiger back among best 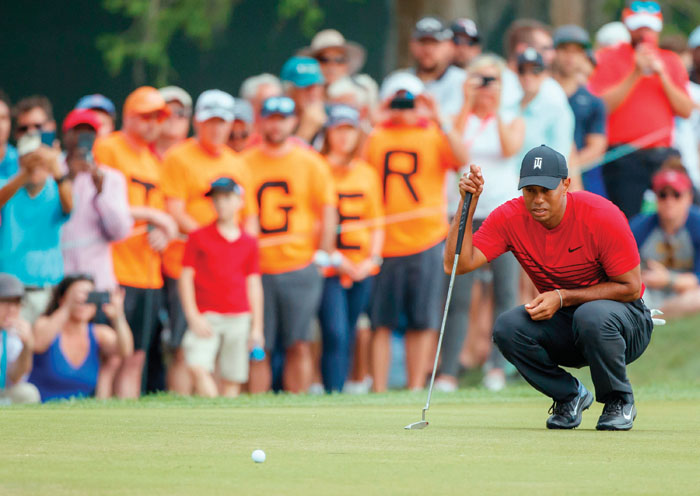 FILE - In this March 11, 2018, file photo, Tiger Woods lines up a putt on the 13th hole during the final round of the Valspar Championship golf tournament, in Palm Harbor, Fla. The buzz following Woods since his return from a fourth back surgery has been bigger and louder than when he was No. 1 in the world, piling up 79 victories on the PGA Tour and 14 majors. (AP Photo/Mike Carlson, File)

This Masters is as much about a red shirt as a green jacket.

Tiger Woods is back for only the second time in the last five years, and what makes the sight of him at Augusta National even more tantalizing is that Woods is starting to look like the player who dominated golf for nearly 15 years.

He has power. His short game is sharp. He makes putts.

The buzz following Woods since his return from a fourth back surgery has been bigger and louder than when he was No. 1 in the world, piling up 79 victories on the PGA Tour and 14 majors. The longer he was away from the game, the more his feats looked even more legendary. And the longer he was gone, the more plausible it was that Woods might never return, at least not at a competitive level.

In his last three starts leading to the Masters, Woods was within one shot of the lead at some point in the final round. His only close call was the Valspar Championship, when he was a 40-foot birdie putt away on the 18th hole from forcing a playoff.

That prompted Jason Day to say, “For him to come back and win … I don’t think it’s going to be a huge surprise now.”

As much as golf has missed the energy he brings to a tournament, Woods has missed golf, especially that first full week in April.

He has been to Augusta National each of the last two years for the Champions Dinners. Just like always, Woods walked up the stairs to the locker room reserved for Masters champions. But there were no clubs. No boxes of golf balls. No need to register. No tee time.

Can he win? It seems like such an absurd thought considering where Woods was even a year ago.

He told Jack Nicklaus at the Champions Dinner last year how much he was hurting, and Nick Faldo was struck by the negative tone. Woods had fusion surgery on his lower back two weeks later. Then, in another low moment, he was arrested in the early hours of Memorial Day on a DUI charge when Florida police found him asleep behind the wheel of his car.

The image of Woods pumping his fist in that red shirt was replaced by the sunken eyes of his mug shot. Woods attributed it to a bad combination of prescription drugs and sought treatment.

He sure didn’t look like a Masters favorite then. He didn’t look like one just over six months ago at the Presidents Cup, where as an assistant captain he said he could picture a scenario where he didn’t return to competition at all.

Now he has one thing in mind: another green jacket.

The biggest obstacle for Woods? So is everyone else.

Adding to the anticipation of the Masters, which starts April 5, that all the best players are hitting their stride going into the first major of the year. In the first 12 weeks, 11 players who won on the PGA Tour already were eligible for the Masters.

That list even includes Phil Mickelson, still going strong, as capable as ever to win a fourth Masters and become the oldest champion at age 47. The playoff victory over Justin Thomas in the Mexico Championship was the validation that Lefty needed.

“I needed to get a win before Augusta so I wasn’t trying to win for the first time in four-and-a-half years at that event,” Mickelson said. “This certainly boosts my confidence and gives me a lot of encouragement.”

Woods, Thomas, Dustin Johnson and Rory McIlroy are the betting favorites for this Masters.

Johnson won at Kapalua by eight shots to start the year. Thomas won in a playoff at the Honda Classic with two bold shots, and he holed a wedge from the fairway that got him into the playoff with Mickelson in Mexico. McIlroy birdied five of his last six holes to win the Arnold Palmer Invitational. Then two-time Masters champion Bubba Watson ended two years without a victory by winning at Riviera and the Match Play.

For McIlroy and Johnson, there is a mixture of pressure and redemption. Three players have a shot at the career Grand Slam this year and it starts with McIlroy at the Masters, who for the fourth year goes to Augusta National needing only a green jacket to compete the greatest collection in golf. Mickelson at the U.S. Open and Jordan Spieth at the PGA Championship will get their opportunities later.

Johnson will make progress simply by teeing off. He was denied that last year after he slipped down the wooden staircase of his rental home in Augusta on the eve of the Masters and had to withdraw with a back injury. He was the clear favorite a year ago, the winner of three straight tournaments.

A man of few thoughts except for the shot ahead of him, Johnson prefers not to dwell on the memories of last year.

“Why? There’s nothing you can do about it,” he said. “That has nothing to do with anything that is happening now.”

Woods, too, is all about moving forward.

For those who felt as though the Masters could not get here soon enough, Woods was right there with them.

“Very eager,” he said with a smile. “I feel like I’m physically able to do it again. And it’s going to be a lot of fun.”