Tip for Final Four 1st-timer: ‘It’s going to blow you away’ 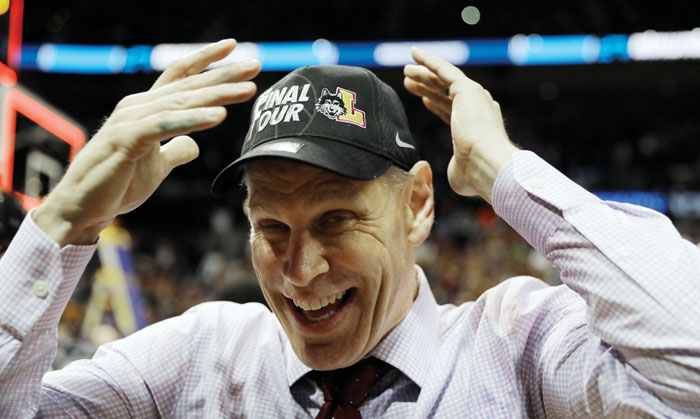 A big believer in asking for advice, Loyola-Chicago coach Porter Moser is in the process of tapping into his friends and associates in search of a few Final Four hacks.

Moser did not want to reveal during a teleconference Monday with reporters to whom he was turning for tips. He did mention one person he would have liked to have been able to connect with during the last phase of the Ramblers’ improbable NCAA Tournament run.

“I wish Coach (Rick) Majerus was around,” Moser said. “Obviously I was so close to him, and, ironically, it was 20 years ago almost to the date that he was in San Antonio with his Utah team. I wish I could tap into that.”

Moser will be the only coach in the national semifinals in San Antonio this weekend who has not previously taken his team to a Final Four. Michigan coach John Beilein, whose team will face Moser’s 11th-seeded Ramblers in Saturday’s first game, is making his second Final Four appearance with the Wolverines. Michigan lost the NCAA championship game in 2013 to Louisville.

On the other side of the bracket, both Villanova’s Jay Wright and Kansas’ Bill Self are leading their teams to the Final Four for a third time. Each has won a title.

The 49-year-old Moser worked as an assistant for the late Majerus at Saint Louis for four seasons in between a stint as Illinois State head coach and taking the Loyola job in 2011. Majerus, who died in 2012, took Utah to the Final Four in 1998, losing to Kentucky in the title game.

With Majerus gone, Moser has tried to channel him through mutual friends and admirers, such as former University of Utah player and Saint Louis assistant coach Alex Jensen.

“I worked with Al Jensen, who’s now at the Utah Jazz, and we were texting each other and going to have a conversation, and we were talking about a couple things Coach Majerus was doing,” Moser said. “But I definitely am in the school of thought, it is my first time, and if I can get any advice or anything, I’ll take it all in and then mix it to what we do.”

“It’s our duty as college basketball teams and (for) fans to satisfy those requests. But it is, it’s a lot of the same questions over and over and over and over again, and you’ve just got to do it and do it the right way,” Beilein said. “Do not get frustrated by it because you will have enough time to plan if you plan your day right.”

Along those same lines, Wright said the grandness of the whole thing can be overwhelming.

“Man, where do you start? First, it’s understanding the enormity of it, that when you get there, it’s going to blow you away,” Wright said. “And I would even give more advice now in that when we went in ‘09, it blew us away, right, so I knew to expect that.”

Wright’s Wildcats lost the national semifinals to North Carolina in ‘09. In 2016, Villanova beat the Tar Heels for the championship.

“The difference in seven years, what they had done to the Final Four and all of the trappings and the murals on the side of buildings of your players, everything had grown so much, I was shocked. Still shocked, even though we had been there before,” Wright said.

“Just to understand, don’t feel like you’re not worth it when you get there and you’re blown away. It happens to everybody. And just try to concentrate on the basketball part of it.”

Everything about the last month has been new and exciting to Moser and the Ramblers, starting with their Missouri Valley Conference championship and first NCAA appearance for the school since 1985.

Nothing has fazed Sister Jean’s team.

“So I love that they’re enjoying this,” Moser said. “Now, with that said, times it by about 100 with the Final Four hoopla, and I get that. I’m going to let them enjoy the ride, and when we’re in film, when we’re in practice, when we’re in walk-throughs in the ball room, everything is going to be as normal, as focused and about what we do. These guys are mature enough to handle it, and that’s all I can do. I mean, you can’t simulate what’s about to happen. They’ve got to go through it, and I want them to go through it.”

DUKE’S MARVIN BAGLEY SAYS HE WILL ENTER THE NBA DRAFT

Bagley announced his decision Wednesday on his verified Instagram account, saying he “learned a lot this year on and off of the court.”

Duke spokesman Mike DeGeorge said Bagley would “eventually” hire an agent. Bagley is expected to be a high lottery pick.

The AP All-American and Atlantic Coast Conference player and rookie of the year led the conference in scoring and rebounding, averaging 21.0 points and 11.1 rebounds.

Bagley broke nine program records for freshmen, including points (694), scoring average, rebounds (366), rebounding average and double-doubles (22). Only three other players in Division I also averaged at least 20 points and 10 rebounds.

“No freshman has done more in his freshman year than Marvin,” coach Mike Krzyzewski said after Bagley’s post. “He’s broken every record and he’s really represented us at the highest level. I’m proud of him because he came in late and he adapted at the highest level. We wish him well. He and his family have prepared him well for this move. He’s ready. I can only see great things happening for him.”

Bagley is the first player from this group of Blue Devils to announce his draft decision, and the 12th Duke freshman to declare for the draft. Each of the previous 11 were taken in the first round, and nine were lottery picks.

The announcement came three days after Duke’s season ended with an overtime loss to Kansas in the Midwest Regional final.