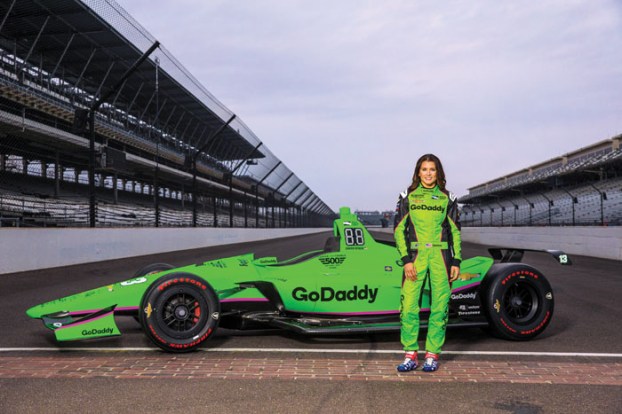 In this Monday, March 26, 2018, photo provided by GoDaddy Operating Company, LLC., Danica Patrick poses with her race car at Indianapolis Motor Speedway in Indianapolis, Ind. Danica Patrick returned to Indianapolis Motor Speedway this week expecting to drive an Indy car for the first time since 2011. Weather prevented her from turning any laps, but she was still able to debut her new No. 13 Ed Carpenter Racing machine on Indy's famed Yard of Bricks. (Jonathan Ferrey/GoDaddy Operating Company, LLC. via AP)

Patrick’s first laps at Indy since 2011 washed out

Danica Patrick returned to Indianapolis Motor Speedway this week expecting to drive an Indy car for the first time since 2011.

Weather prevented her from turning any laps, but she still debuted her new No. 13 Ed Carpenter Racing machine on Indy’s famed Yard of Bricks.

“This is better for a couple reasons — I’m nervous to get back in the car,” Patrick told The Associated Press in a telephone interview from her parents’ snow-patched backyard in Indianapolis. She explained going outside and letting her dogs run around in the snow was the only place she could find enough quiet space to make a call.

Patrick used her time in Indy to instead reveal the final race car of her career, which she will now first get to drive at a rescheduled May 1-2 test at Indy. She traveled to Indianapolis earlier this month for a seat fitting with the Carpenter team and said it felt like old times.

“It’s so comfortable, Indy cars are just so comfortable to sit in because you are reclined a little bit,” Patrick said. “The way your body, legs and feet line up with the pedals, it’s like ‘Oh, yeah, it feels perfect.’”

Patrick is the only woman to win an IndyCar race, lead laps in both the Indianapolis 500 and the Daytona 500, win the pole for the Daytona 500, and the highest-finishing woman in both iconic races. She left the IndyCar Series after the 2011 finale for a full-time move to NASCAR, but is closing her storied career at the track most associated with her historic moments.

Patrick never raced in the Dallara that IndyCar rolled out in 2012 after her move to NASCAR, and the series has another new car that debuted earlier this month in the season opener. Because this week’s test was canceled, Patrick can only guess at the feel. But she’s studied the steering wheel and the design and is making a list of questions about the car.

“I’m a little scared to see how small that back wing is, I’m like ‘Yeah, that’s my downforce?’ but I’m sure it’s made up in other ways that are beyond my knowledge,” Patrick said.

As for the look, Patrick had input in both the livery and firesuit design for the final race of her career and fought for a clean car that sports the GoDaddy green — with a splash of the company’s new use of the color magenta — and Patrick’s personal brands.

The nose cone of the car promotes Patrick’s fitness book, apparel line and vineyard as she prepares to close her career as a race car driver and transition into an entrepreneur. Patrick this year planned the “Danica Double” in which she raced in the Daytona 500 and will close her career on May 27 in the Indianapolis 500.

“I fought hard to keep the car as clean as possible so that when (replicas) are made of my last ever IndyCar race, it represents people who have helped me along the way,” Patrick said. “GoDaddy wanted it simple green, clean, and I wanted it clean of as many (sponsor) stickers as possible just so that it was very sharp and simple.”

But GoDaddy’s incorporation of the color magenta into its company rebranding made for a new splash of color for Patrick, who had been adamant in avoiding pink hues for her primary color schemes.

“I have avoided pink my whole career, and now I get it for my last race. It’s kind of ironic,” Patrick said. “I didn’t want to be like an obvious girl. One of the times I did have pink was for my first Indy 500, for rookie orientation, I didn’t have time to take my nail polish off. So I had pink nail polish on and to this day it is very easy to recognize the photos from that day because it’s one of the only days I had pink nail polish on. All the pictures of taking the helmet on and off, it’s pink.

“So this is full circle for myself as a human being, kind of accepting all that is and I’m a girl, and I’m in racing.”

After the Indy 500, Patrick will focus on her side businesses and growing her brand with assistance from GoDaddy, the company that teamed with Patrick in both IndyCar and NASCAR and placed her in a record for celebrities 13 Super Bowl commercials.

“We’ve always said our sponsorship wasn’t contingent on the number of wins,” said GoDaddy chief marketing officer Barb Rechterman. “We love her passion, and the way she goes after what she wants even in the face of naysayers. She’s got moxie, like pretty much every entrepreneur and successful small business owner on the planet.”

EDITOR’S NOTE: The NASCAR Monster Cup Series is taking a break this week for Easter.

The next  race is the O’Reilly Auto Parts 500 at Texas Motor Speedway on April 8.