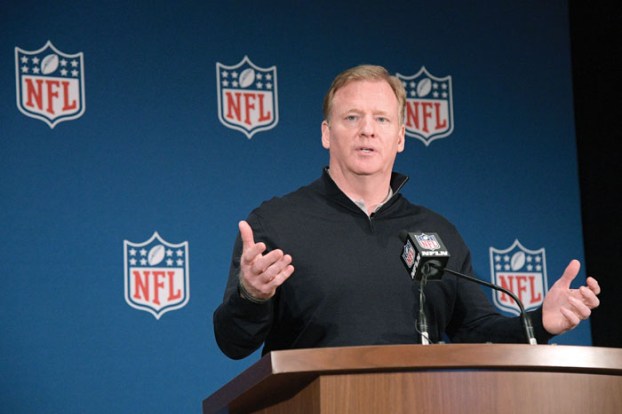 Commissioner Roger Goodell answers a question from a reporter during a news conference at the NFL owners meetings, Wednesday, March 28, 2018, in Orlando, Fla. (Phelan M. Ebenhack/AP Images for NFL)

New helmet rule likely to be part of NFL replay

ORLANDO, Fla. (AP) — The NFL’s new rule outlawing a player from lowering his head to initially make any sort of hit with his helmet likely will be included in replay reviews for officials.

That has not been decided yet, but Commissioner Roger Goodell and competition committee chairman Rich McKay made it clear Wednesday that video reviews probably will be part of the process.

“If we’re able to have replay confirm one of these fouls and also confirms a player be ejected,” Goodell said as the league meetings concluded, “I think there is more confidence among the coaches it will be called accurately.”

After noting the unanimous approval of the new rule among coaches, Goodell said on-field officials felt the same way.

“We think that is appropriate to do and it would be the first time we use replay for safety or in respect to any kind of foul,” Goodell added.

Late Tuesday, the owners rewrote the rule on using the helmet, making it a 15-yard penalty for any player to lower his head to initiate any hit with the helmet. McKay called it “a significant change,” noting that it was a “technique too dangerous for the player doing it and the player being hit.”

While the offender could be disqualified, owners did not call for an automatic ejection on such a play — at least not yet. In college football, when a player is penalized for targeting and a replay review affirms it, he is ejected.

Including replay will be discussed and very possibly implemented at the NFL’s May meetings in Atlanta, where another full agenda will include discussions of changes to the league’s national anthem policy; the potential sale of the Carolina Panthers; and awarding the 2019 and 2020 drafts to two of the five finalist cities.

Before then, Goodell stressed that the workings of the new helmet use rule will be made clear to the players, and there will be further discussions on the standards to go from disqualifying a player to fines and possibly suspensions.

“Our intent is to go to each team with tape and all the analysis work done (by the football operations, technology and medical staffs) and be able to present it to them,” Goodell said, adding it will be “all hands on deck” in the educational process.

“We can take the head out, and we do want to make sure certain techniques are not used in our game. I am confident in the next few months (players) will understand it.”

Like the coaches, the owners were emphatically behind the change.

“We’ve done so much research and investigation on what creates the real concussive plays in the NFL,” Eagles owner Jeff Lurie said, “and it became obvious that so many of the plays are through the lowering of the helmet and using the helmet as a weapon. I thought this (rule) was very important.”

Asked about the Rooney Rule and criticism of the Raiders in how they hired Jon Gruden as coach, Goodell said the league will look at it “and see if we can improve it, absolutely.” Oakland was found to have not violated the rule that requires minority candidates to be interviewed for head coaching and executive positions.

—Goodell said any findings in the investigation of the behavior of Carolina Panthers owner Jerry Richardson will be made public once the probe is concluded. There is no timetable for that.

Richardson has been accused of workplace misconduct and in December said he was selling the team.

The league hopes a buyer can be found in the next few weeks, vetted and then presented for approval at the May meetings.

—While there were discussions in Orlando about the NFL’s national anthem policy, Goodell said the focus was more on implementing social justice platforms in tandem with the players. Potential changes to that policy could come in May.

Most noteworthy, the league eliminated the requirement that a team that scores a winning touchdown at the end of regulation kick the extra point or go for a 2-point conversion.

In a January playoff game that Minnesota memorably won on a final pass play, New Orleans players were required to return to the field after leaving for a meaningless extra point. The Vikings took a knee.

Of course, bettors and fantasy players could have a stake in the PAT, but neither participating team did, particularly now that points scored or points differential is so low in any tiebreaking procedures.

The owners also approved closing an overtime loophole that could have been embarrassing had it ever occurred.

Now, if the team that gets the ball first scores a field goal, then the opponent loses possession by an interception or fumble on its first series, the down will be permitted to run to its conclusion, including awarding points scored by either team during the down.

Previously, the turnover ended the game regardless — even though the team getting the takeaway conceivably could itself turn over the ball on that play and see it returned for a score by the opponent.

Patrick’s first laps at Indy since 2011 washed out