Guest column: My mother was a thespian 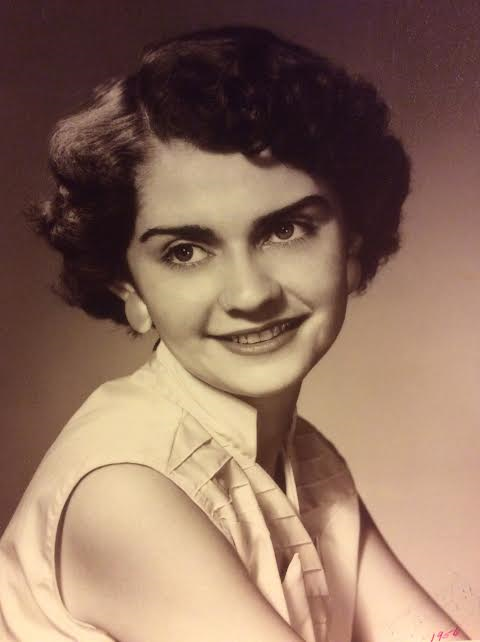 An early picture of Nancy Malone

I was 13 when my mom announced that she is a thespian. I remained calm, but as soon as I was excused from the dinner table (anyone else remember having to be excused from the table?), I rushed upstairs to dig into the 20-pound tome we called a dictionary to be sure she was OK.

Recently widowed at the age of 31 and consequently relocating from our home in middle Tennessee to her hometown of Salisbury, my mother, Nancy Malone, needed a creative outlet. Working full time and raising a teenager as a newly single parent were wearing on her. Dear friend Pat Heiss encouraged her to audition for “Blithe Spirit” being produced by the local theater group Piedmont Players. She read, she was cast and, more important, she was forever hooked on theater.

During rehearsal when she could not scream convincingly in a scene, director Millard McDonald had Pat throw a glass of ice water on her when she turned to face her. “Perfect,” he shouted. “That’s what I want to hear.”

My favorite line in “Our Town” is “and it was addressed: Jane Crofut: the Crofut Farm, Grover’s Corners, Sutton County, New Hampshire, United States or America, Continent of North America, Western Hemisphere, the Earth, the Solar System, the Universe, the Mind of God. That’s what it said on the envelope.”

Having been transplanted far away from everything I loved and knew, Rebecca’s line resonated with me. My favorite line to hear from my mom was “come out and smell my heliotrope in the moonlight.” I had visions of Katharine Hepburn’s “the calla lilies are in bloom again” every time she said it. Over the years, I loved to help her read lines in preparation for shows.

Mom loved the play — the camaraderie of the cast and production crew and the strike parties. She loved the closing-night gifts and backstage pranks.

One she was quite proud of orchestrating was on the last night of “Pajama Game.” As costume mistress for the show, she did laundry every night and was in and out of everyone’s stall downstairs. In the scene where Joe Junod pulled down his khakis to reveal ridiculous boxers, the audience had double reason to laugh on closing night. “Someone” had stitched 3-inch-wide bright red lace on the legs. Yes, he saw them before he put them on, but because of a rapid scene change, he had no choice but to wear them on stage.

Through the years, she worked on shows such as “Curious Savage,” “Blithe Spirit,” “The Pajama Game,” “Hello, Dolly,” “Rainmaker,” “Cactus Flower,” “Our Town,” “Any Wednesday,” “A Thousand Clowns,” and “I’m Herbert.”

When a stroke left her with short-term memory issues and she feared forgetting lines, she continued working in less obvious areas such as props, costumes, house manager and box office instead of on stage. She marveled at the talent that came across the Piedmont Players stage.

When the recession hit in the 1970s, she gave up working on shows. She could not afford the gas to drive from Thomas Street to Catawba every night for rehearsal and was too embarrassed to ask for a ride. However, she rarely missed seeing a Piedmont Players or Blue Masque production. The friendships forged through her experiences stayed with her until her death in 1989.

During my high school years, I learned to do homework on the couch in the green room at Hedrick Little Theater. I fell asleep more than one night to the distant sound of “notes” being given by Millard McDonald and Bonnie Royster. Far too shy to go on stage, I grew to love working with scenery, costumes and props.

A favorite backstage experience was painting the perfume shop wallpaper for “She Loves Me.” We stenciled hundreds of oversized yellow roses with pink edged petals on the mint green flats. I still have one of those roses in a scrapbook. I loved ferreting out accessories to decorate a living room or office set.

I felt so privileged to be an usher. My very first night, I remember having to sneak down the aisle with my flashlight and find Dr. Cullen Hall in the middle of a show. Before the days of cellphones, the hospital had called the box office because he was needed for an unexpected delivery.

Long before I knew I would major in art in college, Barbara Rackley taught me the fine art of silk screen. Unlike computerized images used today, everything was chemically burned into a film on real silk. Each poster was pulled by hand and laid out to dry. Over the years, I helped with at least half a dozen posters. My glory moment was when I was allowed to design and create the posters for “Curious Savage” and “Any Wednesday.”

Sadly, my mother never saw her daughter on stage. She was in a wheelchair and there was no ramp. Her younger brother never saw her either. He couldn’t get over her “sashaying in front of a bunch of strangers.” I remember him saying it was “a buvvy’s raisin.” Translation: above his raising. He had no intention of going to that fancy “cultivated” event. I am sure he meant cultured.

I never let him live down the buvvy’s raisin comment. For Christmas that year, I designed a colorful Buvvy’s Raisins label and affixed it to a large box of California raisins. Gags were a big part of opening gifts with our family. He and his big sister always tried to outdo one another. We won that year.

The love of theater and live performance was a huge influence in my life. The years spent backstage gave me a sincere appreciation of what it takes to bring a script or score to life. By the time my daughter started high school, she had attended more than 100 live productions that included plays, musicals and concerts. She saw everything from high school productions to Broadway. I wanted her to know how much better live was than anything she would ever see on a screen.

Nancy Malone would be astounded at the multiple venues and theater programs available in Salisbury. In addition to Piedmont Players Theater, the community is privileged to have Blue Masque, Livingstone Players, Lee Street Theatre, St. Thomas Players and the drama programs at the high schools. I think she would be front and center cheering everyone on at every venue. She might even have been convinced to stitch up a costume or two.

When the word thespian came up twice in the same week — with the passing of James “Parkie” Parker and again when Debbie Hubbard Pastore mentioned her Thespian Honors Club at Salisbury High School — it was just the nudge I needed.

With that in mind, I have wanted to do something for years to honor her memory that was theater-related. I would love to establish some award through the Thespian Honors Club at Salisbury High School that annually recognizes a student.

Perhaps it will acknowledge someone who is on stage for the first time or someone who has shown tremendous growth in a season. The criteria can be established. Its not a huge thing to do but rather a small gesture on behalf of the memory of a young woman who was able to escape the difficulty and tedium of daily life and get above her raising by stepping into the pages of a script.