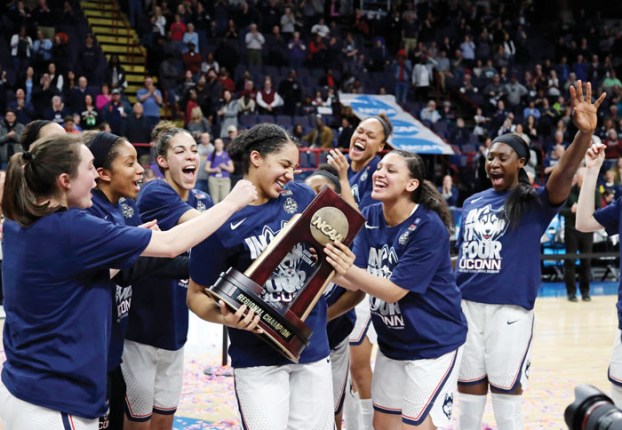 Even among the elite, UConn’s excellence stands out

Even among the elite in women’s college basketball, UConn stands out.

The Huskies are back in the Final Four for an 11th straight season, breaking a tie with John Wooden and the UCLA men’s program for the Division I record. UConn beat defending national champion South Carolina 94-65 on Monday night to earn the trip to Columbus, Ohio.

All three of the other teams may be capable of knocking off the Huskies, but there’s no doubt Auriemma’s group is a huge favorite. UConn has won 147 of its past 148 games going back nearly four full seasons.

The only loss during that span was against Mississippi State in overtime during the national semifinals last season. Morgan William hit a jumper at the buzzer in overtime that ended UConn’s 111-game winning streak.

But even the Bulldogs can appreciate how special UConn’s run of 11 straight Final Fours has been.

“It’s a level of excellence never before seen in the game of basketball, not just women,” Mississippi State coach Vic Schaefer said.

UConn (36-0) will face Notre Dame (33-3) in one national semifinal while Mississippi State (36-1) plays Louisville (36-2) in the other game on Friday. All of the four teams are No. 1 seeds, which is just the fourth time in tournament history that’s happened.

UConn has dominated the women’s game so thoroughly the past several seasons that some have questioned if it’s bad for the sport. Louisville coach Jeff Walz dismissed that line of thinking.

“No, it’s not bad for the game,” Walz said. “Nobody was saying when John Wooden was winning 10 in a row and all that stuff that UCLA was bad for the men’s game. It’s really just a shame that people can’t enjoy and appreciate how good they are. I mean, it’s pretty darn impressive.”

A few more things to watch at the women’s Final Four in Columbus:

RECRUITING TO UCONN: When reflecting on UConn’s 11 straight Final Fours, Auriemma said one of the hardest parts of maintaining success is recruiting the right players who can handle the expectations: “You come to Connecticut, and you look up on those walls when you come to our practice facility, and you look around and you go, all right, well, I’m going to be here four years. Well, what in God’s name can I accomplish that hasn’t already been done?  If you’re in awe by that, or you’re intimidated by that, then you’re not going to be successful here and we’re not going to be successful.”

FACING MCCOWAN: Mississippi State’s 6-foot-7 Teaira McCowan — who was a third team AP All-American — has been outstanding for the Bulldogs during the NCAA Tournament.

She had 23 points and 21 rebounds against UCLA in their Elite Eight win. Walz said facing McCowan on Friday will be a huge challenge: “I’m hoping (Mississippi State coach Vic Schaefer) decides to drive the bus and makes a wrong turn somewhere. So if we can have that happen, I’ll feel much better.”

THE GOOD AND THE BAD: Mississippi State is often remembered for its upset win over UConn in the Final Four last season. What is less remembered is that in 2016, the Bulldogs had a terrible experience against the Huskies, losing 98-38 in the Sweet 16. Schaefer ruefully recalled that day when discussing UConn’s excellence: “You know, they talk about their offense and how good it is, but let me tell you, they are really good defensively. Trust me. I got held to 38 one time.”

NOTRE DAME’S UNLIKELY RUN: Notre Dame might be the most unlikely Final Four participant of this year’s quartet. The Irish were a No. 1 seed despite losing four players over the season to knee injuries. Said coach Muffet McGraw: “We keep shaking our heads. I think I’m kind of torn between crying and laughing. It means so much. There’s so much emotion because of what we’ve been through. The resilience of this team, how they just are relentless in pursuit of their goal. They didn’t ever quit or question whether or not we could do it.”

New helmet rule likely to be part of NFL replay