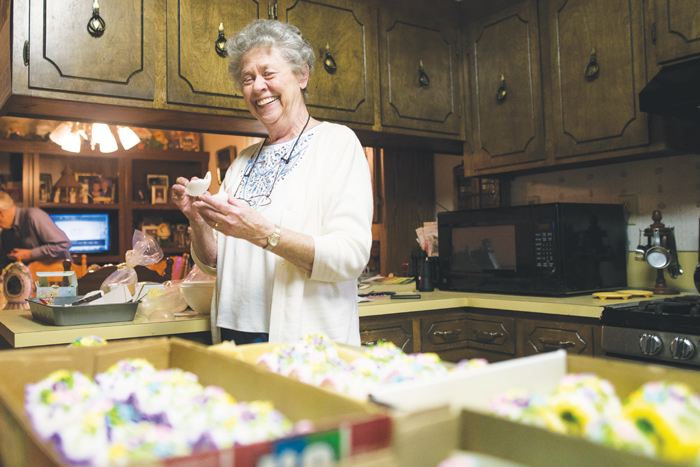 During Sunday morning’s Easter service at Organ Lutheran Church, when kids walk up front for the children’s sermon, each will be handed one of Miller’s colorful creations — panoramic sugar eggs piped in colors of pink, purple, yellow and blue.

Miller has made more than 40 of them to distribute. She and her great-niece, Ameyetta Yost, who assisted on the project, will place each egg in a box and wrap them in decorative cellophane and ribbon.

Inside each box, Miller is including a slip of paper explaining some of the religious significance behind Easter eggs. The notes say this:

“The Easter egg is a symbol of the miracle of birth and the beauty of creation, as each spring renews the earth. But even more, it represents Christ rising from the dead and the message of new life and hope. Each brightly colored egg reflects a special part of the gift of joy and gladness that Christ brings to every heart.”

It will probably be after the Easter service or sometime later at home when the children and their parents pull out the panoramic sugar eggs and marvel at Miller’s handiwork.

The exterior of the eggs, which sound like glass or ceramic when you tap them, have decorative flowers and ribbons of icing. She has put the year, 2018, on every egg.

One end of each egg is open. Looking in you’ll see a bucolic scene, complete with little animals. It could be a swan and two ducks; a rabbit, duck and a chick; or maybe just two chicks.

Altogether, it’s a happy, natural panorama of land and sky.

All the elements of this decorative egg are technically edible. But that’s not something you really want to do. First, you might break a tooth. Second, these eggs are pretty much all sugar.

“It would be incredibly sweet,” Miller says.

Miller, 77, is best known for her cakes and especially her cake decorating. She first became interested in cake decorating as a young woman living in California.

“The first class I went to I realized it was my thing,” she says.

Miller is former president of the N.C. chapter of the International Cake Exploration Society, and she has been attending the society’s international conventions for decades.

At some of these conventions, she has taught classes on making panoramic sugar eggs — a skill that came easily for someone with her talents with icing. At her home off Old Beatty Ford Road, Miller has much bigger, pedestal-style panoramic sugar eggs she made back in the 1980s.

On these eggs, the decorations inside and out are lavish — and all done with royal icing, which is made from powdered sugar, egg whites and cream of tartar. This same kind of icing often serves as the glue for when people make gingerbread houses.

Miller makes the royal icing whatever colors she wants and creates her panoramic landscapes. Cake colors are used, no paints. Some of the more elaborate scenes might includes streams and bridges.

“Most of the time, I try to put birds in the sky,” Miller says.

Years ago, Miller’s skill in making panoramic sugar eggs was showcased in a five-minute segment on WFMY-TV in Greensboro. She guided viewers through the process of making a sugar egg, and husband Clarence still has the show on DVD.

First, Ann blends granulated sugar and water together until it feels like damp sand.

She packs the damp sugar into half of a plastic egg mold. She prefers clear molds. Once the sugar is packed in, she takes a kitchen knife and scrapes it off smoothly.

Miller then flips the mold onto a piece of cardboard so the plastic loosens, leaving half of a sugar egg. She cuts off a half-inch at one end, then pins a small piece of cardboard on that end. This is the part of the egg to be scooped out later, and the cardboard keeps it from drying out as much as the rest of the egg.

Drying takes one to two hours. Then Miller uses a small spoon to scoop out much of the underside, which has not hardened like the rest.

For the  panoramic sugar eggs she made for the Organ Lutheran children, Miller repeated the process for the other half of the egg before decorating and combining the hollowed out halves together with royal icing.

If allowed to stay in a dry place, the panoramic sugar eggs can last a long time. Miller makes pedestals for eggs that stand upright using the same sugar and water mixture packed into a tart pan mold.

Miller warns: Do not put them in a refrigerator or freezer.

“Listen to that,” Miller says, tapping some of her larger sugar egg creations. “It totally amazes me that they hold up.”

As you might guess, sometimes a sugar egg cracks in the building stage. Miller gives broken pieces to her brother Andrew, who finds a use for the sugar in his beehives.

“So the sugar is not wasted,” Ann says.

Typically, kids listening to children’s sermons might get a lollipop to take with them back to their seats. Sunday, at Organ Lutheran, they will be receiving something much more significant from Ann Miller.

“I’ve been making them a very long time,” Miller says. “I guess I just wanted to share it with the kids.”