Conference asks the question: Why are you a Christian? 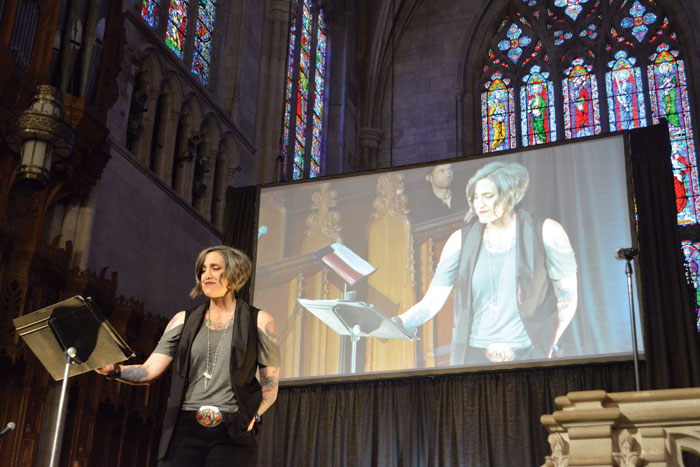 DURHAM — Why are you a Christian?

It’s an intriguing question, and for each person, the answer is different.

A conference titled “Why Christian?” was held March 16-17 in Duke Chapel on the campus of Duke University.

Two moderators, the Rev. Nadia Bolz-Weber and Rachel Held Evans, founded the conference in 2015. Both women are authors and speakers, and both say they wanted to lift up voices not often heard in the church.

Bolz-Weber is a Lutheran pastor and the founding pastor of The House for All Sinners & Saints in Denver. The New York Times bestselling author is a big draw both inside and outside her denomination.

The conference welcomed all denominations as well as people who want to be a part of the church.

Participants listened to each other’s stories of faith and life and learned about a kaleidoscope of experiences with race, gender and sexual orientation.

During her welcome to the capacity crowd of 1,300, Evans acknowledged that many in attendance were still feeling a real loss about the 2016 presidential election. She said she does not want to become cynical.

“Holy anger turns over tables,” she said. “It supports Black Lives Matter. It walks out of schools. It stands with strength and power and solidarity.”

Evans said she is still Christian because of other Christians who think the Gospel is good news. “We need to hear one another’s testimonies,” she said.

“I’m a Christian because the story of Jesus is the story I want to risk being wrong about. Everyone gets to tell their own gospel.”

Introducing Bolz-Weber, Evans described her as “a recovering addict, a Lutheran pastor who cusses like a truck driver, and someone who would have absolutely terrified me in high school. Yet we are friends because of Jesus.”

Bolz-Weber gave a timeline of her relationship with Jesus.

“I’m Christian because Jesus is unafraid to touch lepers, to reach into tombs we make our homes,” she said. “He was merciful to the demons — that’s super disturbing to me. But to be honest, that is exactly the kind of savior I need.”

Bolz-Weber and Evans took turns introducing two speakers each for the morning and afternoon sessions. Breakout sessions with other speakers were offered.

Bantum is a second-generation Korean-American. She said that God appears in the “and” space of life — spaces of silence, questioning, rejection and pain.

“Faith is the space between the last time we heard from God and the next time we’ll hear from God,” she said.

Kegler was raised in an Episcopal home but was “seduced by the dark side” — attending an evangelical mega-church youth group. Things were fine until the pastor started railing against three things: alcoholism, abortion and homosexuality. At the time, Kegler had not come out as gay.

“I knew they were wrong, and I knew I could never go back. I took solace with the Lutherans — as one often does — and fell in love with the God of the Magnificat,” she said.

“About two years ago, I was living the life I wanted,” Bowler said.

She married her high school sweetheart and had a son. She landed a job at Duke. Then, the 35-year-old learned that the excruciating pain in her stomach was a sign of Stage 4 colon cancer.

Bowler said she didn’t bargain with God but did promise to be honest.

“I didn’t feel angry. I felt love. When I should have felt abandoned, I was floating on love. It revealed to me the suffering of others. That’s why I’m Christian. God was there, and it was awful.

“Life is so beautiful, but life is so hard.”

In February, Bowler published a memoir, “Everything Happens for a Reason, and Other Lies I’ve Loved.” She continues cancer treatment.

Garcia, who grew up “a good Catholic boy,” is a transgender Latina woman who is completing her studies to be ordained a Lutheran pastor.

“I rarely identify as Christian,” she said. “I am Lutheran. God has made me who I am, and I am made perfectly.”

Battle recounted a harrowing story of Labor Day 2009, when her hometown community near Yanceyville was shaken after several black children were shot by a white man who was angry that they were walking past his home in their neighborhood.

“I had only a few sanctuaries, and this was one of those,” she said. “This was the tipping point. I was sick and tired of trying to be strong in order to survive. I was tired, and I was waking up and dying.”

She started exploring and found God in many places.

“It matters that Jesus was fully human,” she said. “Jesus lived in the margins. In his crucifixion, his body was under attack simply because of who he was, and his pain was not dulled. I saw a savior willing to stand in solidarity with me.”

Battle encouraged those raised with white privilege to approach listening to others’ stories with humility. “No, you don’t get it. But you have your own story. Be humble.”

Curtice spoke of growing up and not understanding what it means to be a Native American. She came to understand and identify with her ancestors. When she sings “Wade in the Water,” she said, it means renewal in baptism.

“Why am I still a Christian? Because water still flows in the river, and we are still called to baptism. This is my wilderness, and I enter into it cleansed.”

Rasche, a second-generation Indian-American, was raised in a Hindu household and ordained as a Lutheran pastor. She called herself “theologically promiscuous.”

Even though she feels her “otherness,” she said, “I still need community. That’s the funny thing about community, because there are individuals in community.”

“That day affirmed by Christianity,” she said.

Others came to take care of her, she said. “I am a brown woman in the United States of America. I carry my passport wherever I go. I am terrified for my mom and for my brother. I am terrified for those called to profess Good News. I stay in church because of accountability.

“I was baptized as a 26-year-old, and the same words said over babies were said over me.”

Thames said that fingerprints on her refrigerator annoyed her because they reminded her of her struggles in life: growing up poor in Mississippi, living in public housing, living with an addicted mother. Fortunately, she said, she is intelligent.

“I did not want to be another statistic,” she said.

The church gave her a place to hide.

“My family didn’t have much, but they gave me a Jesus and I needed that Jesus. Those fingerprints on the fridge are the reason I am a Christian, the fingerprints of faith that held me and would not let me go.”