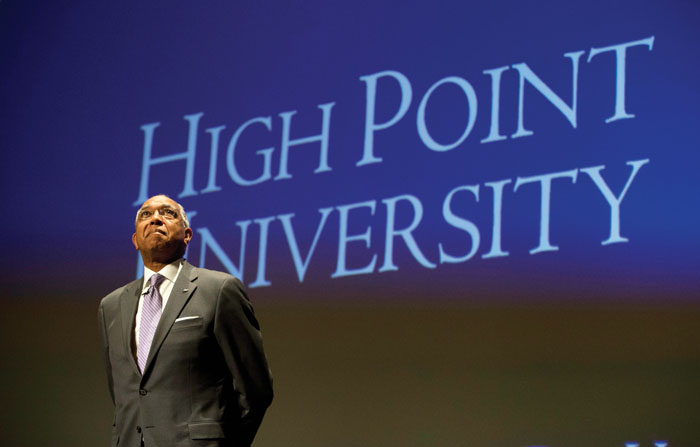 HIGH POINT (AP) — Tubby Smith isn’t ready to retire, so after being fired by Memphis he was looking for employment. High Point needed a men’s basketball coach and soon Smith got a call from his alma mater.

Now the veteran coach, who led Kentucky to the national title two decades ago, will be roaming the sidelines for the Panthers.

Smith may have surprised some Tuesday when he said, “It has been a dream job, when you think about it.” The 66-year-old Smith played for the Panthers from 1969-73 and was inducted into the school’s sports hall of fame two years ago.

The school announced Tuesday it was bringing back its most famous alumnus and giving Smith a five-year contract, though financial terms were not released.

Smith said he gave no consideration to hanging up his whistle in the two weeks since Memphis fired him after he went 21-13. The school suffered drops in both attendance and donations to the athletic department.

The well-traveled Smith is 597-302 and has taken five schools to the NCAA Tournament, most recently Texas Tech in 2016.

His goal is to make it six with the Panthers, who have yet to reach the tournament since they moved to Division I in 1999 and play in the Big South Conference, a perennial one-bid league.

“We think the goal is to compete first in the Big South,” Smith said. “We know the pressure each school is under to be the best team in this league. So that should be our first goal, to build this team into a team that can compete as it has in the past for the Big South championship and then win the tournament, because we know that’s the bottom line.”

High Point did not release the terms of Smith’s contract, as is customary at the small, private school. But in discussing the deal’s length, University President Nido Qubein quipped that Smith “could have 10, 15 years if he wants.”

Memphis fired Smith two years into a five-year contract worth $15.45 million, and he was due $3.25 million in each of the next three years. That school said in a statement that an agreement of “separation” had been reached in the “best financial interest” of the university with details still to be finalized.

A week after Smith’s dismissal, Qubein said they met last Tuesday at the North Carolina home of one of the coaches’ friends. The president told Smith “we want you to come back home.” He said Smith agreed to the job last Thursday, and the two sides spent the next five days taking care of unspecified details.

Smith didn’t provide details on who will make up his coaching staff, saying he will talk to former coach Scott Cherry’s assistants while also valuing the loyalty of his assistants at Memphis — including his son, Saul.

“I know that it’s different, recruiting” to High Point, Smith said. “It’s just different, so each person brings something unique to the team, to the organization, so my staff will reflect what we’re trying, the type of young men we’re trying to recruit.”

Qubein also announced that the timeline to build the 4,500-seat Qubein Arena has been moved up and will begin this summer instead of during the 2018-19 academic year, with a planned opening in 2020.

An assistant at Winthrop the last six seasons, Mark Prosser was introduced at a news conference at Western Carolina on Tuesday. He succeeds Larry Hunter, who stepped down earlier this month after 13 seasons.

Prosser helped Bucknell, Wofford and Winthrop to NCAA tournament appearances during his tenure at each school. He was head coach at Brevard College for a year before joining Pat Kelsey’s staff at Winthrop in 2013.

Kelsey called Mark Prosser “a grand slam hire” for Western Carolina. Wofford coach Mike Young says Prosser “checks all the boxes that one would look for in a head coach.”

Skip Prosser, who was head coach at Xavier as well as Wake Forest. died of a heart attack in 2007 at age 56.