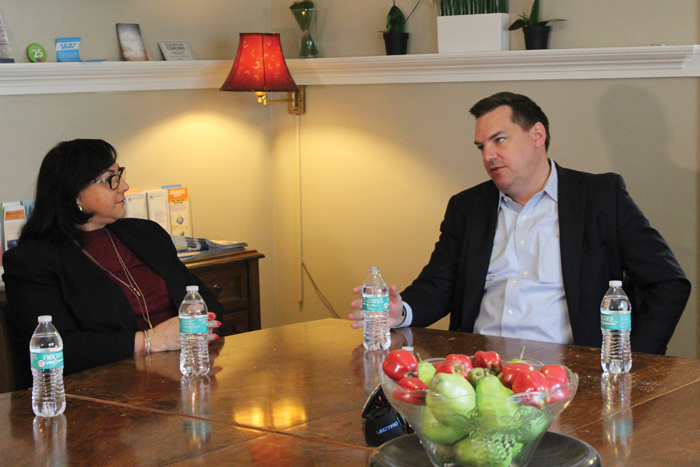 CONCORD — U.S. Rep. Richard Hudson met with staff members of Serenity House in Concord Tuesday for a roundtable discussion about a nationwide crisis.

The topic was opioid addiction, a problem far too real for Cabarrus County, according to emergency service and law enforcement personnel who attended.

“Last year in Cabarrus County, we has 639 opioid overdoses,” said Alan Thompson, director of Cabarrus Emergency Medical Services. ” … For the last eight months or so, we’ve teetered in the top five (across North Carolina). … Several months, we’ve been No. 1.”

Opioid abuse, Thompson said, is a “human story.” Anyone can struggle with addiction, he said.

“There are a lot that started by taking opioids for a hurt back or for having wisdom teeth pulled, whatever it may be,” Harrison said. “As that continues, they get to the point where they can’t tell if it’s real pain or perceived pain. They feel like they’ve got to have (opioids) even though they’re not sure why, so it continues to escalate.”

Serenity House is a residential facility for men recovering from addiction. Harrison described it as “a program where a person can come and learn to use the tools of recovery.”

“They may already have the tools, but they haven’t had a safe place to be able to learn to use them,” she said.

“A lot of our residents don’t know how to receive joy. They don’t know how to believe in themselves, how to have confidence,” Sturgis said. “If all of these behaviors are learned within a 10- to 12-year period, how hard do you think it is for us within six-month period to get them working OK?”

Hudson, a Republican who represents Montgomery, Stanly, Moore, Cabarrus and Hoke counties and parts of Rowan and Cumberland counties, agreed.

“You’ve got a treatment where you’re getting a whole lot of information, but then what’s next?” Hudson said “Are you putting people right back in the same lifestyle and locations where they were?”

“Or, are you going to give them a place like this where they can learn to rewire their brain, learn new habits? This is critical to breaking the cycle,” Hudson said.

Preventative measures include means of safely disposing of unused medications. Hudson spoke of DisposeRx, a company based in Pinehurst that manufactures a powder that, when mixed with water and medication, creates a biodegradable, nontoxic gel.

Walmart now puts a packet of this powder in every opioid prescription bag, said Hudson.

“Maybe, at the end of the day, we just need to find a way to pay to put these packets in whenever you pick up your prescription,” said Hudson. “But I’m not the kind of person that wants a government mandate, an unfunded mandate, for every problem we have.”

Naloxone is always delivered with resource materials so that those struggling and their families can be educated about community resources for treatment, he said.

At the close of Tuesday’s meeting, Hudson said he will be taking notes from the day’s discussion back with him to Washington.

He said he works to apply real-world experiences from service professionals and people recovering from addiction into new legislation. Specifically, he said, he will present points from Tuesday’s discussion to the Committee on Energy and Commerce’s subcommittee on health.

“(A)s we look at what the federal government can do to help that’s actually going to help, that’s really going to make a difference. This is really helpful to me,” he said.