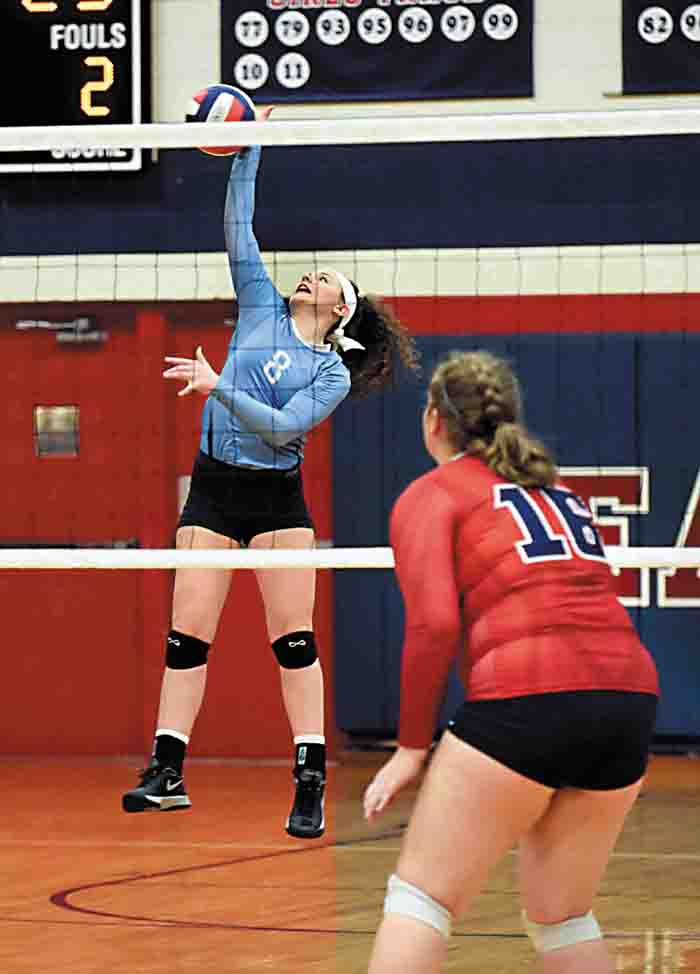 MOUNT ULLA — Mady Myers did a little of everything for West Rowan volleyball as senior.

Actually, she did a lot of everything. Third on the team in kills, third in blocks, fourth in digs, fourth in serves received and fifth in aces. The co-captain was a big part of West Rowan’s two-year rise from nowhere to a 20-7 season and status as one of the better 3A teams in the state.

Four of the Falcons’ seven losses were to 3A state champ North Iredell. West had the misfortune of running into North Iredell for the fourth time in the second round of the playoffs. With a more sensible seed  — West was No. 16 — the Falcons may have played for a while. Myers was all over the place in the stretch run, as the Falcons beat Carson in a semifinals in the North Piedmont Conference Tournament and topped Sun Valley to open the playoffs.

“That’s the thing about Mady,” West coach Jan Dowling said. “A lot of girls like offense, but her defense is every bit as good as her offense. That versatility is going to make her a good college player.”

Myers is 5-foot-8, which is why she’ll be playing in Division III, but there were a host of colleges that recruited her. Averett, Piedmont and Guilford were among the interested program, but Myers picked William Peace University in Raleigh.

“There were some schools I really liked and there were some teams I really liked,” Myers said. “With William Peace, I found the right fit for both. I liked the campus and when I got on the court with the girls there, I knew they were girls I could play with and have fun playing with.”

William Peace’s volleyball team  is coached by Nicole Barringer, who starred at South Rowan High and Averett University, so there are a lot of  local connections. Dowling coached Barringer at South before she moved over to West. Barringer was an assistant coach at Catawba for the 2017 season. When William Peace volleyball coach Kevin Daniels was promoted to the AD chair last November, the school needed a new head volleyball coach. Daniels hired Barringer back in January.

“Coach Barringer had come to scout some tournaments I was playing in when she was still at Catawba,” Myers said. “When she got the job at William Peace, she asked about me, and Coach Dowling told her that I hadn’t committed anywhere yet.”

Dowling said Myers is Barringer’s first recruit for William Peace, so it’s  exciting for everyone involved. Barringer did not inherit a rebuilding program. The William Peace Pacers, who wear green and white, were 19-17 last season, including 14-2 in the USA South Conference.

William Peace is the same school that was known as Peace College for many years. It became William Peace in 2012 when the school began admitting male students.

Myers started playing volleyball relatively late. Her sport was baseball as a youngster. She played on the diamond for six years, from T-Ball through fifth grade. When it was time for her to make the transition from baseball to softball in middle school, she discovered she didn’t like softball nearly as much.

She gave volleyball a try for the first time with the High Rock Volleyball Club in the summer between eighth and ninth grade, and it proved to be more than a fling. She was instantly hooked.

“I knew this was the sport I should be doing and wanted to be doing,” Myers said. “Volleyball was it for me. I dropped the other sports.”

Myers is athletic, but she had to pay some dues as she learned the game. She was on the West  jayvee team as a freshman. As a sophomore, her season was split between the jayvees and the varsity.

She became an important player for the Falcons as a junior. Then she had a breakout senior season as an outside and middle hitter.

“I was proud of making the all-county team for the first time,” Myers said. “I have to give a lot of credit to Coach Dowling for pushing us and making us so much better. She’s made us work, and she was responsible for us becoming a very good team. We came out strong this year, surprised a lot of people and had a lot of accomplishments.”

Myers’ versatility should allow her to pile up more accomplishments in college.

“I think my strength is being a smart volleyball player,”Myers said. “It’s not about who can hit the ball the hardest. Most of the time, it’s  about being able to place the ball or getting the ball to the right place. I’d like to play the middle in college, but I also think I could do fine playing defense on the back row and  being a good passer.  Wherever I can help the team the most, that’s where I want to be.”

Myers said the aspect of volleyball she wants to improve on is communication. She gets intensely quiet on the court at times, and she wants to talk more and encourage her teammates more.

In the classroom, she can’t improve much. She’s a strong student. That really helped her in the recruiting process.

She plans to major in biology at William Peace. She’d like to have a career as a physical therapist who can help exceptional children.